Does Netanyahu count on leftist NGOs to save him?

Prime Minister Benjamin Netanyahu doesn't feel the need to publicly oppose the settlement regularization law and anger the right because he thinks the left will do that work for him and win. 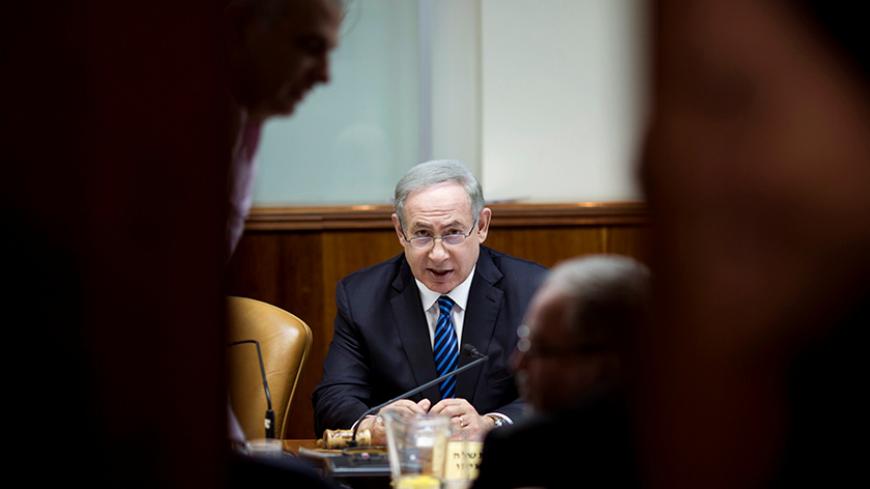 It appears that Attorney General Avichai Mandelblit has successfully refuted rumors that before assuming his important job, Prime Minister Benjamin Netanyahu performed surgery on him to remove his spine. Mandelblit, who also serves as the government’s legal adviser, stood up to the boss and declared that he would not be able to defend the proposed legislation legalizing wildcat West Bank settlements against a Supreme Court challenge. Coalition chairman David Bitan, Netanyahu’s yes-man, then announced that the government would retain private counsel to do the job. In fact, however, Mandelblit’s “dissent” plays a central role in Netanyahu’s strategic planning.

Netanyahu’s first move is to push the so-called regularization bill through the Knesset and steal the thunder of his coalition partner Naftali Bennett, chair of HaBayit HaYehudi. At that point, human rights and leftist groups will petition the nation’s top court in a challenge to the law. The court will rule that the law is unconstitutional, and the right wing will accuse the left and the court of betraying Zionism. Netanyahu will then hold up the Israeli legal system as a shining example of democracy and respect for the law. Most important, Israel will wriggle out of appearing in the defendant’s box at the International Court of Justice (ICJ) in The Hague for building settlements on private Palestinian land.

This devious plan has not escaped the attention of human rights organizations or Israel’s opposition parties. In recent days, party leaders have been arguing whether to take on the ungrateful task that Netanyahu has in store for them of petitioning the Supreme Court against the law. Al-Monitor has learned that many among them want to call Netanyahu’s bluff and remove the fig leaf they have been providing him.

The late Prime Minister Yitzhak Rabin, also not a great fan of human rights organizations or the Supreme Court, famously said that the Palestinian police had an easier time than Israel fighting Hamas because they were not hampered by B’Tselem, the human rights group, or the Supreme Court. Similarly, without petitions to the High Court by organizations like B’Tselem or directly from Palestinians whose land has been confiscated, the incumbent prime minister will find himself exposed, facing the ICJ. He will be forced to explain to the judges that expropriating land from a Palestinian under Israeli occupation so that a Jew can build his home there is a legal, just and humane act.

A quick scan of the ICJ’s 2004 opinion regarding the separation fence built by Israel in part along the West Bank demarcation line will suffice to assess how the judges would rule on the regularization bill. Responding to a request by the UN General Assembly to render an advisory opinion, the court said that taking over private [Palestinian] land to build the fence is a breach of The Hague Regulations and the Fourth Geneva Convention.

Israel rejected the opinion at the time, claiming the fence was a self-defense measure against terror attacks. The US Congress condemned the court’s opinion and expressed support for Israel’s right to build the barrier. Secretary of State Colin Powell said Israel had a right to defend itself. In the regularization case, Israel isn't even claiming that the bill, which essentially legalizes the theft of Palestinian land, stems from defense considerations.

For Bennett and his friends on the religious right, a Bible and anti-Arab prejudice are sufficient justification for taking land from Palestinians. Unlike Bennett, his party colleague Justice Minister Ayelet Shaked is trying to provide the bill with legal grounds. She is relying on a 2010 ruling by the European Court of Human Rights concerning a petition filed by Greek Cypriot refugees demanding that Turkey restore the lands and assets they left behind when fleeing the 1974 Turkish invasion of the island. A majority of the judges in Strasbourg accepted the Turkish Cypriot position, according to which reality on the ground takes precedence over “family roots.” They ruled that tenant rights supersede those of house owners and that refugees can receive the compensation they deserve in cash rather than land.

Internationally renowned refugee expert Eyal Benvenisti told Al-Monitor that comparing the ruling on the Cypriot issue to the regularization bill is “like likening a sheep and a wolf. True, both have four legs, a tail and a head.”

Benvenisti, Whewell professor of international law at the University of Cambridge, explained, “There’s a difference between a situation in which people took over the homes of neighbors who had become refugees as a result of a conflict and those who knowingly walked into an area of contested sovereignty under negotiation.” In the latter situation, Benvenisti is also referring to the 2005 Israeli Supreme Court ruling on a petition submitted by settlers against the government's plan to withdraw from Gaza and evacuate the settlements there.

Ten of the 11 justices underscored that the petitioners had resided in the area temporarily by virtue of a military decree. The state itself argued at the time that the presence of the Israelis in the territories was subordinate to a peace agreement or to a unilateral decision to vacate the area. Unlike in the Israeli-Palestinian conflict, however, the senior jurist emphasized, complex negotiations were underway in Cyprus to resolve the Greek-Turkish conflict and return the refugees, including restoring lands to their owners and paying market value compensation to those not returning.

If Israel were willing to vacate West Bank settlements and conduct serious negotiations on the Palestinian refugee problem, it would have found in the European Court’s decision reinforcement for its stand on the 1948 Palestinian refugees who were forced out of their homes or fled. Benvenisti noted that the court “placed an obstacle in front of growing efforts to recognize refugees’ rights to return to their countries of origin.” The judges set a legal precedent according to which UN General Assembly Resolution 194, on the issue of the 1948 refugees, does not grant each Palestinian refugee the right to return to his or her home. He also remarked that the 2002 Arab Peace Initiative, which refers to Resolution 194, in effect provided Israel with veto power over the way it is implemented.

Israel would rather ignore that historic initiative and place all its hopes in a US veto at the UN Security Council against measures on settlements or for Palestinian statehood, which would allow it to realize its vision of ruling the entire Land of Israel. Netanyahu is counting on B’Tselem and the Supreme Court to extricate him from The Hague. There is no guarantee that this time they will oblige and take on this ungrateful task for him.