Instead of slandering it, Israel should join ICC

Israel has a fairly easy option for dealing with the decision by the prosecutor of the International Criminal Court to probe suspicions of alleged Israeli war crimes: ratifying the court’s founding treaty and joining it as full-pledged member. 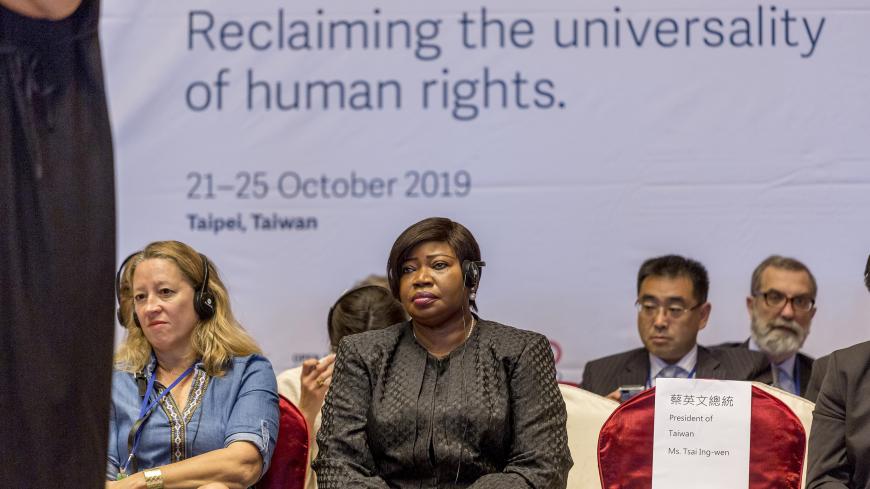 Fatou Bensouda (center-right), chief prosecutor of the International Criminal Court, listens to speeches during the opening ceremony of the congress of the International Federation of Human Rights at the Gran Hotel, Taipei, Taiwan, Oct. 21, 2019. - Omar Havana / Getty Images

It has been a while since Israel had a new evil enemy threatening its very existence. The Dec. 20 announcement by the prosecutor of the International Criminal Court (ICC) in The Hague, Fatou Bensouda, that she had found “reasonable basis” to suspect Israeli war crimes were and are being committed in the West Bank and Gaza Strip and was seeking the court’s ruling on opening an investigation has turned both the Gambian-born jurist and the court itself into our sworn enemies.

This was not always the case. The idea of establishing an international framework to try those suspected of violating international law first arose after World War I. Article 14 of the 1919 Versailles Treaty stated that the League of Nations would approve plans “for the establishment of a Permanent Court of International Justice” that would try individuals — not states. But the plan fell by the wayside, and Article 14 was not implemented. Germany tried after World War I some of its soldiers for international crimes, but the German court acquitted almost all of them. These trials were conducted in Leipzig in 1921 (hence the name "the Leipzig Trials"). The allies mocked these trials because they were pathetic, and the Germans were angry over them, because they considered them a humiliation and as being forced upon their judicial system.

In the wake of World War II, the same demand resurfaced. A demand for an international court that would directly try suspects in severe crimes, which the countries involved could not or did not want adjudicated in their own courts. The renewed effort was more concerted, and appeared to be succeeding.

Jewish jurists were prominent among the advocates of a permanent tribunal, one of them being Shabtai Rosenne, an Israeli diplomat and professor of international law. Years ago, Rosenne told me Jewish jurists sought to ensure that criminals who committed atrocities during the war would not escape prosecution. The Nuremberg and Tokyo trials were the first in history in which judges of different nationalities tried suspected international criminals, highlighting the need for an international criminal court. However, the move was shelved once again, this time due to the Cold War.

The horrific massacres in the former Yugoslavia and Rwanda in the 1990s led to the establishment of ad hoc tribunals to try the perpetrators, once again highlighting the need for such a permanent framework. In-depth discussions ensued regarding the court’s jurisdiction and authority, with American and Israeli legal scholars as prominent participants. The 1998 UN vote on the covenant establishing the court (known as the Rome Statute) was supported by 120 nations, with 21 abstentions and seven states voting against, among them the United States and Israel. The United States was opposed mostly because the statute stipulated that individuals would be tried by the court even if their own countries opposed the move. Israel’s opposition stemmed mostly from the treaty’s determination that the transfer of citizens from the territories of an occupying power to occupied territory constitutes a war crime for which those involved can be prosecuted.

Ironically, Israel, whose representatives pushed for years for the establishment of an international court to try criminals whose countries had defended them and provided them with immunity for their actions, voted against its establishment. People like the late Rosenne and others who had been involved in the process were hugely frustrated by the Israeli vote, seeing it as undermining their persistent efforts. They hoped that the Israeli government would eventually come to its senses and support The Hague court’s founding treaty.

Their hopes were fulfilled after the 1999 elections in which Labor leader Ehud Barak defeated Prime Minister Benjamin Netanyahu. I myself was appointed justice minister, and together with professor Shlomo Ben-Ami who had been appointed foreign minister we submitted a proposal to the government on Dec. 31, 2000, for Israel to sign the treaty. The date was the deadline for states to join the treaty but put off its ratification; signing the Rome Statute after that date would also require immediate ratification by the signatory state. In essence, this meant that Israel adopted the principles of the covenant, but deferred its commitment to change its laws in order to adapt them to the treaty. The government of Prime Minister Ariel Sharon, which came to power in March 2001, did not even consider ratifying the treaty. Israel, like the United States, is thus a signatory to the treaty but not among the majority of world nations that have ratified it and enshrined their commitment to it.

The ICC accepted the Palestinians as members following the UN’s 2012 recognition of “Palestine” as a non-member observer state, paving the way for the Palestinian Authority to seek prosecution of Israelis for war crimes stemming from the transfer of Israeli citizens to settlements in the occupied territories, in violation of international law. If the court authorizes Bensouda’s request for such prosecution, many Israelis could be arrested once they leave Israel and taken to the ICC in The Hague. Israel’s main argument against prosecuting its officials by the ICC is procedural, not germane, arguing that Palestine is not a state and thus not authorized to make such demands of the ICC.

The Palestinian leadership, for its part, rightly sees Bensouda’s decision as a tremendous achievement and proof that Israel can be confronted and embarrassed by diplomatic tools, not necessarily violence. This is a victory for Palestinian President Mahmoud Abbas over Hamas and Islamic Jihad, which seeks to crush Israel through the use of violence. However, the Palestinian achievement need not come at Israel’s expense.

Israel can solve the problem with relative ease: It only needs to go back almost 20 years and ratify the Rome Statute. Any state that ratifies the treaty is authorized to receive a seven-year deferral of action on any part of the document that it finds particularly troubling. If Israel chooses to cite the settlement issue, the ICC will not be authorized to arrest any Israeli on that count until 2028. Ratification would do justice to historic Jewish-Israeli efforts to establish the court and to try individual criminals, and on the other hand would avoid the arrest threat to decision-makers involved in the settlement enterprise. Regardless of the ICC issue, in the coming years, and especially if a different government is formed, Israel will have to make a supreme effort to reach agreement with the Palestinians. Such agreement would address the settlement issue, too. Once an agreement is reached, the issue will be removed from the international agenda, in general, and from that of the ICC.