The International Criminal Court’s investigation into potential war crimes committed by Israel and Hamas is looming over the Biden administration’s review of sanctions on the Hague-based tribunal. 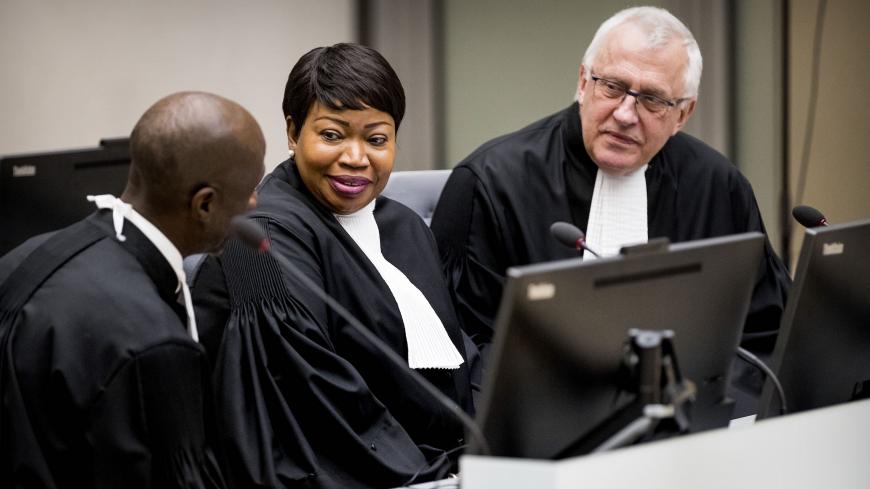 International Criminal Court chief prosecutor Fatou Bensouda (C) and deputy prosecutor James Stewart (R) attend the initial appearance before judges of member of the board of the Confederation of African Football, Patrice-Edouard Ngaissona of the Central African Republic, at the ICC in The Hague on Jan. 25, 2019, following his extradition from France on charges of war crimes and crimes against humanity. - KOEN VAN WEEL/AFP via Getty Images

President Joe Biden likes to say “America is back.” But six weeks weeks into office, that's not the case at the International Criminal Court, despite his stated push to renew the US role in global institutions.

On Wednesday, the chief prosecutor of the Hague-based tribunal announced a formal investigation into alleged war crimes committed by Israel in the Palestinian territories. The inquiry is expected to focus on the actions of both Israel and militant group Hamas during the Gaza war in 2014 as well as Israel’s settlement expansion in the West Bank.

In a strongly worded statement issued late Wednesday, Secretary of State Antony Blinken said the United States “firmly opposes” the investigation and has “serious concerns about the ICC’s attempts to exercise its jurisdiction over Israeli personnel.”

Neither the United States nor Israel are party to the Rome Statute, the international treaty that established the ICC. They argue the court lacks jurisdiction to take up the case because the Palestinians, despite joining the ICC in 2015, aren’t an independent sovereign state.

The court’s announcement on Wednesday, while welcomed by the Palestinian Foreign Ministry as one that “serves Palestine’s tireless pursuit of justice and accountability,” was swiftly condemned by Israel. Prime Minister Benjamin called the ICC's decision “undiluted antisemitism and the height of hypocrisy.”

His government is, meanwhile, said to be quietly lobbying the Biden administration to keep the Donald Trump administration’s sanctions on ICC officials and their families. During their phone call last month, Axios reports that Netanyahu asked Biden to maintain the measures as a point of leverage against the court.

Angered over the ICC’s probe into possible war crimes committed by US troops in Afghanistan, Trump authorized asset freezes and travel bans against ICC officials and their families last year. The court’s chief prosecutor, Gambian lawyer Fatou Bensouda, and one of her top deputies remain blacklisted.

“The executive order should have been rescinded on Day 1,” said Katherine Gallagher, a senior staff attorney at the Center for Constitutional Rights who is representing victims in both the Afghan and the Palestinian cases.

“Both administrations have the first female African chief prosecutor on a sanctions list,” Gallagher said. “It is concerning that a policy that was so extreme by the Trump administration wasn’t immediately denounced and rescinded by the Biden administration.”

The State Department has repeatedly stated that it is still evaluating the sanctions.

“Much as we disagree with the ICC's actions relating to the Palestinian situation, and of course to Afghanistan … we are thoroughly reviewing sanctions pursuant to Executive Order 13928 as we determine our next steps,” State Department spokesperson Ned Price said on Wednesday.

Advocates of the court want to know what’s taking so long. Last month, more than 80 nongovernmental organizations, faith-based groups and academic institutions called on the administration to reverse the sanctions or risk transforming “a shameful but temporary action into a standing license for other governments to attack multilateral institutions.”

Biden has so far rejoined the World Health Organization, reentered the Paris Agreement on climate change and announced it would “reengage” with the UN Human Rights Council before seeking full membership later this year. In a Wednesday address outlining the Biden administration’s foreign policy strategy, Blinken committed the United States to leading with diplomacy.

“Issuing sanctions against an independent prosecutor elected through the multilateral system isn't exactly a diplomatic maneuver,” said Akila Radhakrishnan, president of the New York-based Global Justice Center. “While the Biden administration may disagree with some of the decisions that are being made by the prosecutor on the court, it’s not in line with their own professed values around human rights, around accountability, to take measures against an independent prosecutor."

Upcoming staffing changes at the ICC may force Biden’s hand. If sanctions are still on the books in June, the Biden administration will have to decide whether to remove Bensouda from the blacklist when her nine-year-term expires and add Karim Khan, the British attorney who is replacing her.