Fatou Bensouda, the chief prosecutor for the International Criminal Court, says she is monitoring the escalating violence in the Palestinian territories and Israel. 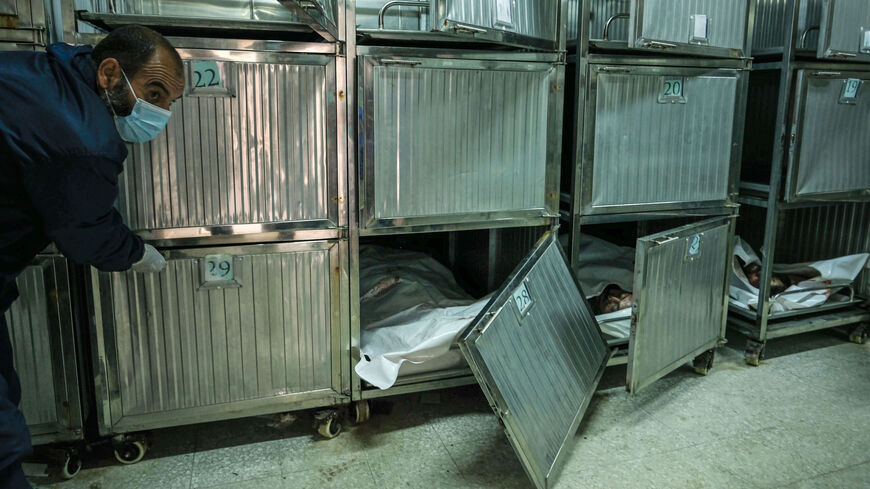 Bodies of Palestinians killed in an airstrike lie in a morgue east of Gaza City on May 12, 2021 in Gaza City, Gaza. - Fatima Shbair/Getty Images

The chief prosecutor for the International Criminal Court says she is monitoring the escalating conflict between Israel and Hamas for potential war crimes.

“I note with great concern the escalation of violence in the West Bank, including East Jerusalem, as well as in and around Gaza, and the possible commission of crimes under the Rome Statute,” Fatou Bensouda said in a statement on Wednesday.

In March, the Hague-based tribunal announced a formal investigation into alleged war crimes committed by Israel in the Palestinian territories. The inquiry is expected to focus on the actions of both Israel and militant group Hamas during the Gaza war in 2014, as well as Israel’s settlement expansion in the West Bank.

Israel is not a party to the Rome Statute, the international treaty that established the ICC. It argues the court lacks jurisdiction to take up the case because the Palestinians, despite joining the ICC in 2015, aren’t an independent sovereign state.

“My office will continue to monitor developments on the ground and will factor any matter that falls within its jurisdiction,” Bensouda said, adding, “I echo the call from the international community for calm, restraint and a stop to the violence.”

Sparked by Israel’s potential eviction of Palestinians from the Sheikh Jarrah neighborhood of east Jerusalem, the latest round of fighting between Israel and the militant group Hamas is the heaviest since the 2014 war. The recent hostilities have killed 56 Palestinians, including 14 children, and six Israelis, according to Palestinian and Israeli officials. The UN’s Middle East envoy, Tor Wennesland, tweeted that the fighting is nearing all-out war.

Stop the fire immediately. We’re escalating towards a full scale war. Leaders on all sides have to take the responsibility of deescalation. The cost of war in Gaza is devastating & is being paid by ordinary people. UN is working w/ all sides to restore calm. Stop the violence now

On Wednesday, the US administration announced it was sending Hady Amr, the top State Department official for Palestinian-Israel affairs, to the region. Secretary of State Antony Blinken also spoke with Israeli Prime Minister Benjamin Netanyahu to reiterate US support for Israel’s right to self-defense.

“The Secretary emphasized the need for Israelis and Palestinians to be able to live in safety and security, as well as enjoy equal measures of freedom, security, prosperity, and democracy,” according to the US readout of the call.