In an interview with Al-Monitor, Luis Moreno-Ocampo, former chief prosecutor for the International Criminal Court, says that Palestinian membership in the court is possible, but could also open up Palestinian authorities to prosecution. 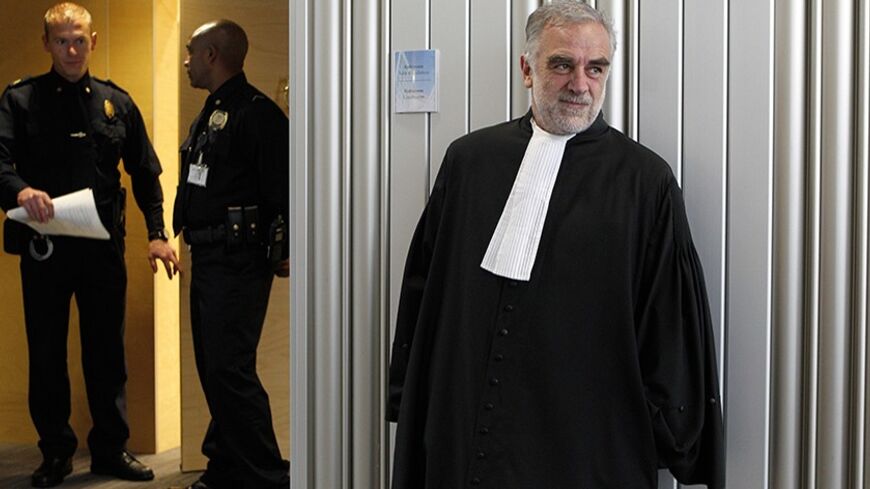 Seventeen human rights organizations, among them Amnesty International and Human Rights Watch, on May 8 called for the president of the Palestinian Authority, Mahmoud Abbas, to apply on behalf of Palestine to join the International Criminal Court (ICC).

Coincidentally, the Hebrew University was at the same time hosting Luis Moreno-Ocampo, who until two years ago had served as the court’s chief prosecutor. Moreno-Ocampo was invited to Israel to speak at the Fried-Gal Transitional Justice Initiative, a program that seeks to introduce the process of transitional justice to future law students and leaders of Israel. That same week, on May 9, Israeli author Amos Oz stirred up a storm when he suggested that instead of calling Jews who harass the Arab minority “hilltop youth,” and their acts of vandalism “price tag,” the perpetrators should be called “Hebrew neo-Nazis.”

Three events — the push for Palestine to join the ICC, the wave of hate crimes against non-Jews and the international coverage of the impending visit of Pope Francis to Israel and the occupied territories May 24-26 — are causing sleepless nights for the heads of the Israeli security and foreign services. The Jewish zealots do not hesitate to hurt members of the Christian clergy, to desecrate monasteries and to blaspheme the name of Jesus.

Moreno-Ocampo, in an interview he granted Al-Monitor on May 9, stressed that recognition of Palestine by the UN General Assembly as a non-member observer state had changed the legal situation in the region. “In the past, the Palestinians asked to join the International Criminal Court, but I had no authority to determine whether they are, in fact, a state,” explained the jurist who became the ICC’s first prosecutor, a position he held for nine years. “Today they are recognized and can choose to turn to the court.”

A special chapter is reserved for Moreno-Ocampo in the story of the political-legal change taking place in this era, during which the world is moving from the nation-state model solely to include a global system of laws and administration. Moreno-Ocampo was among those who gradually turned the ICC into an instrument that terrorizes tyrants, rebels, occupiers and war criminals.

Moreno-Ocampo’s personal history is intertwined with that of his homeland, Argentina. In 1985, two years after the end of the horrifying military dictatorship, Moreno-Ocampo served as state prosecutor against the generals, including the former president, in what came to be known as the junta trial. Tens of thousands of people were disappeared, murdered and tortured during the years of Argentina’s Dirty War, and the prosecution team was determined to seek justice and to express the voice of the victims. Moreno-Ocampo is careful to stress that the history of the international court started beforehand, on Nov. 20, 1945. The title he chose for his lecture in Jerusalem was “From Nuremberg to The Hague.”

“That’s where it began,” he reminded his listeners. “The precedent of forming an international jury was established at Nuremberg. That’s when the foundations were laid down for an international tribunal that would try people suspected of genocide, crimes against humanity and war crimes.” To illustrate the continuity of this legacy, Moreno-Ocampo invited Benjamin Ferencz, the prosecutor of the Nuremberg trials, to the first trial he conducted in 2003 at the ICC, against the Congolese militia leader Thomas Lubanga (who was convicted some two years ago of forcibly recruiting children and using girls as sex slaves). He placed a robe over Ferencz’s shoulders and asked him to take part in reading the summations.

Moreno-Ocampo hopes, however, that unlike the Nuremberg tribunal, as well as Argentina's, the contribution of today’s court will not end with the price exacted from those who committed crimes and lost power, but will also succeed in preventing additional crimes.

Al-Monitor:  How will a Palestinian request to join the criminal court influence the situation in the region?

Moreno-Ocampo:  The presence of the ICC in the region will encourage the sides to think creatively about how to solve their problems in their bilateral relations. They can both do a lot about this. The conflict keeps resulting in many casualties in Israel and Palestine. Joining the ICC might prevent crimes and open up new ways of thinking about the problem. The Palestinians understand that joining the ICC will expose them as well to prosecutions. If this, then, prevents the firing of rockets from Gaza, Israel’s citizens will benefit, will they not?

Al-Monitor:  Can the fact that Israel is concerned about the Palestinians joining the ICC point to a troubled conscience?

Moreno-Ocampo: Yes, it probably does. The question is what Israel should do now that the Palestinians are authorized to join the court. If it doesn’t want them to do so, it has to think what it can offer them in order to prevent such a move. If the court's presence can constitute a threat that will prevent future crimes, this will be an excellent result. As I said, this goes for the Palestinians, as well.

Al-Monitor:  How does the court wield influence if it does not have any enforcement mechanisms of its own?

Moreno-Ocampo:  The police forces of the member states enforce the rulings of the court. That means that whoever is convicted cannot travel around Europe, Canada or Australia [unlike the United States, Russia, China and additional states that have not signed the Rome Statute, the document that serves as the source of the ICC’s authority]. Zero impunity is an essential matter for the prevention of future crimes.

The idea is to ensure that in an effort to prevent crimes, justice is carried out across borders, not only in the state where the crimes are committed. When I joined the ICC, there were 21 member states, and today there are 122. We keep expanding. It’s only a matter of time. What we need are additional tools to prevent violence and to control it.

Al-Monitor:  And finally, in your lectures in Israel you asked students what they would do if they were in your shoes as a prosecutor. Permit me to ask you, if you were the prime minister of Israel, would you join the ICC?

Moreno-​Ocampo:  First of all, you have to solve the problem between yourselves and the Palestinians. Only then can you join the ICC, in order to ensure that you don’t slip back into violence. It’s hard and complex to join the ICC as long as you are in the throes of a conflict.