To expedite reconciliation for the Hussein-era Anfal Campaign, Kurds in Iraq are pushing Baghdad to join the International Criminal Court to prosecute the culprits of genocide against the Kurds, writes Abdel Hamid Zebari. 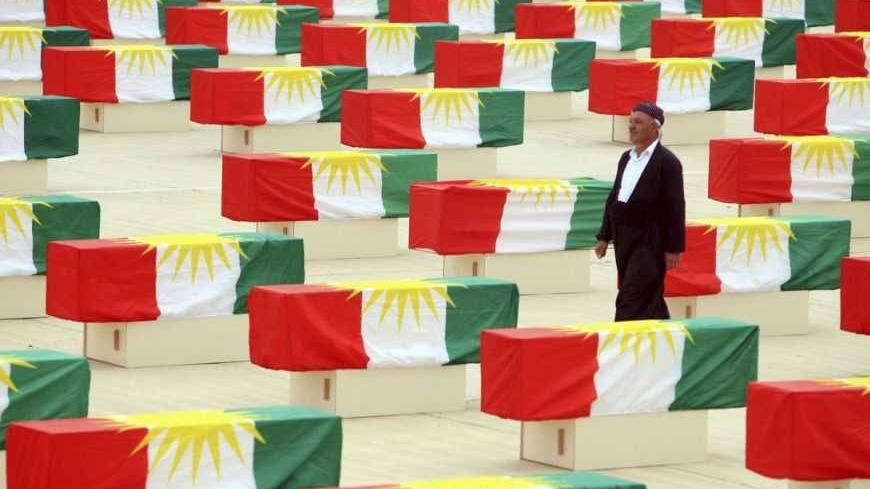 A Kurdish man walks among coffins draped with Kurdish flag containing the remains of victims during a burial ceremony northeast of Baghdad, May 28, 2012. More than 700 Kurds, said to be killed by former Iraqi leader Saddam Hussein in the Anfal Campaign, were honored. - REUTERS/Stringer

The Kurdistan Regional Government of Iraq is seeking to pressure the federal government in Baghdad to join the International Criminal Court (ICC) to ensure that what took place under the rule of the successive regimes in Iraq before 2003 — when the Kurdish people were subjected to assaults and ethnic cleansing — would never repeat itself.

During the reign of former Iraqi President Saddam Hussein in the 1980s, Kurds were subjected to genocidal campaigns dubbed the Anfal Campaign by the government itself, in reference to the eighth chapter of the Quran, which details the triumph of proponents of the newly descended Islam over pagans.

In 2008, the Iraqi Parliament deemed the Anfal operations implemented by Iraqi forces under the reign of Saddam Hussein as an act of genocide against the Kurdish people.

At the time, the Iraqi government destroyed around 4,000 Kurdish villages and killed hundreds of thousands of Kurds in the Kurdistan region. Nearly half a million of Kurdish citizens were driven out of the regions they came from and were forced to stay in villages set up by the Iraqi government in order to closely monitor them. According to unofficial statistics, more than 182,000 Kurds were arrested, killed and buried in mass graves in remote areas of Iraq.

On Dec. 5, 2012, the Swedish Parliament recognized that the Anfal operations amounted to genocide against Iraqi Kurds.

In a statement to Al-Monitor, Aram Ahmed, minister of the Martyrs and Anfal Affairs in the Baghdad government, said: “We want Iraq to become a member state in the ICC because it is a way for us to sign the Rome Statute and be part of the ICC in The Hague.”

The minister called upon Iraqi institutions, especially the government and parliament, to take the initiative to join the ICC and act in good faith in applying justice, national reconciliation and tolerance in Iraq.

He added: “This is the right way to build a new Iraq and to employ all possible means  to prevent the recurrence of such crimes in the future.”

The ICC, based  in The Hague, Netherlands, is the first court capable of prosecuting individuals accused of genocide, crimes against humanity, war crimes and crimes of aggression. The ICC is intended to be a court of last resort, investigating and prosecuting only where national courts have failed or were unable to investigate or prosecute individuals for committing such crimes.

By July 1, 2012, the 10th anniversary of the court’s establishment, 121 states had acceded to the Rome Statute of the International Criminal Court. The ICC, however, has faced scathing criticism from a number of countries, including China, India, the United States and Russia, which have refrained from acceding to the Rome Statute.

The court has opened investigations into four cases in northern Uganda, the Democratic Republic of Congo, the Central African Republic and Darfur. It has also issued nine arrest warrants and has detained two suspects in custody who are set to stand trial.

Some people confuse the ICC with the International Court of Justice (ICJ) — sometimes referred to as the International Tribunal — the judicial arm of the United Nations to resolve disputes between nations. For this reason, it is important to note that they are two separate legal systems. The court can only deal with crimes committed since it was founded.

Still, Jabar Qadir, a Kurdish professor, political analyst and genocide researcher, believes it's important to join the International Criminal Court to prevent genocides, crimes against humanity and future war crimes against any social or ethnic group in Iraq.

He believes, however, that the court suffers from serious deficiencies, as a number of the U.N. Security Council member-states did not join the treaty or the International Tribunal. Therefore, some of the Security Council’s resolutions have not been implemented, such as the arrest warrant for the Sudanese President Omar al-Bashir.

Bashir has been heavily criticized and accused by international human rights organizations in recent years, as recruits affiliated or loyal to the government are involved in war crimes committed in Darfur or Southern Sudan.

So far, the Kurdistan Regional Government has organized two conferences to pressure the Iraqi government in Baghdad to join the International Criminal Court.

Leaders in the Kurdistan region have repeatedly said that some [parties] in Iraq still seek to revive the Anfal campaign, as perpetrated by the former regime against the Kurds, particularly as the conflict between Baghdad and Erbil intensifies regarding the disputed areas in Kirkuk, Mosul and Diyala.

The relationship between Kurdish leaders and the federal Iraqi government — headed by Shiite National Iraqi Alliance leader Nouri al-Maliki — has witnessed heated tension over several pending issues, most notably the Kurds claim to the city of Kirkuk, the oil contracts concluded by Erbil with foreign companies — considered invalid by Baghdad — and Kurdistan's share of Iraq's budget.