Despite the passage of more than 43 years since an autonomy agreement was signed between Iraq’s central government and the Kurds, tensions persist between Baghdad and Erbil, writes Abdel Hamid Zebari. 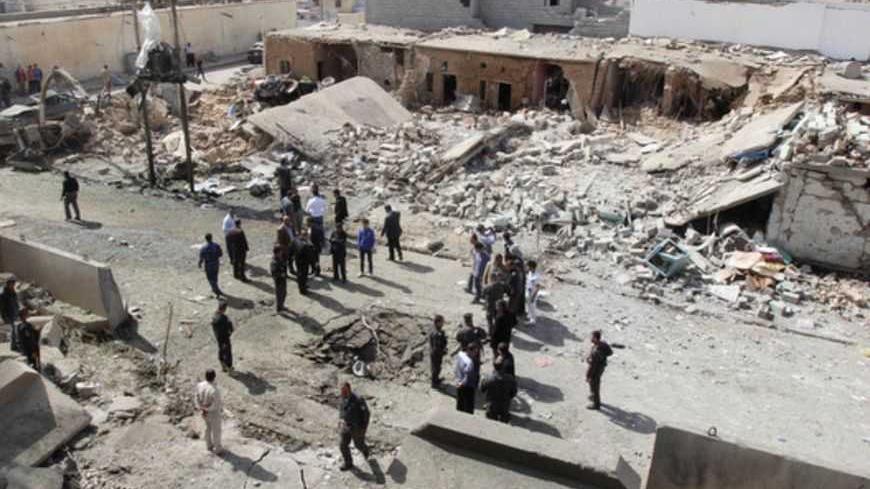 Security personnel and residents gather around a crater caused by a suicide car-bomb attack in Debis, west of Kirkuk March 11, 2013. - REUTERS/Ako Rasheed

On March 11, 1970, the Kurds of Iraq signed a peace accord with the government that is still to this day celebrated as a declaration of autonomy. Five years later, the Iraqi authorities backed out of the accord following a disagreement over the administrative borders of the Kurdistan Region. Ever since, these borders have become a curse for Arabs and Kurds alike and a fundamental matter of dispute.

The Kurds hold this agreement in high esteem, as it was the first deal through which they reaped benefits. March 11 was made an official holiday commemorated in the Kurdistan region by its official institutions.

The March 11 accords, concluded between the Iraqi government and Kurdish leader Mullah Mustafa Barazani, acknowledged the national rights of Kurds. Moreover, they recognized the legitimacy of their participation in the government and allowed the Kurdish language to be taught in educational institutions.

In an interview with Al-Monitor, Mahmoud Outhman, a Kurdish politician and current MP who was a member of the Kurdish delegation that negotiated the deal, clarified that “when the agreement was announced on March 11, 1970, it was a historical event. At the time — 43 years ago — granting the Kurds civil rights was a weighty issue. Unfortunately, however, the implementation of the agreement has to this day been an exercise in futility.”

Historical sources note that the main dispute between the Iraqi government and Barazani flared up when the latter laid formal claim to Kirkuk’s oil fields, considering their ownership to be part of Kurdish rights. The Iraqi government, at the time, considered the Kurds' insistence on imposing a Kurdish identity on Kirkuk a virtual declaration of war. Consequently, in March 1974, Baghdad unilaterally decreed an autonomy statute — without the consent of Kurds — that was a far cry from the agreement of 1970. The 1974 manifesto’s definition of the autonomous area excluded Kirkuk, Khanaqin and Sinjar, and renamed the province of Kirkuk “al-Ta’mim.”

Outhman added, “In 1974, two weeks before the war began, the government had put on the table an agreement it already knew that we wouldn’t accept. We were asked to accept it and delay any discussion over the border to a later date. However, we were more concerned about the boundary delimitation, since the law could be easily amended, contrary to the borders. Currently, we are facing the same problem with Article 140 of the constitution.”

In 1975, Iran and Iraq concluded what was known as the Algiers Agreement, pursuant to which Mohamad Reza Bahlavi, the Shah of Iran at the time, cut supplies to the Kurds. As a result, the Kurdish movement collapsed and the Iraqi government took over the Kurdish cities once again, imposing the autonomous statute on the three cities of Erbil, al-Sulaymaniyah and Dohuk.

On March 6, 1975, in order to quell the Kurdish armed struggle that was led by Barazani and supported by Bahlavi, the Algiers Agreement was signed and the river boundaries between the two countries were demarcated according to the thalweg line. In 1980, however, Saddam Hussein had abrogated the agreement when the Iranian Shah was ousted and the Islamists took power, leading the region into the First Gulf War.

For eight years, Iraq and Iran were plunged into an endless war that left their infrastructures and economies severely damaged. Subsequently, the former Iraqi regime was at odds with the Gulf countries — notably Kuwait — which supported Iraq during its war on Iran, only to be occupied by Hussein in 1990. Hussein was down and out after the US liberated Kuwait. Back then, an international economic blockade was imposed on Iraq and the Kurdish region, which was under Hussein’s control, broke out in upheaval in 1991.

Nearly 43 years after the signing of the 1970 agreement, the impasse between the Kurdish government in Erbil and the federal government in Baghdad is still standing over the demand of the former to add Kirkuk, along with part of Nineveh and Diyala provinces, to the autonomous region. However, other Arab political powers are opposing the claim.

In 2003, when the former Iraqi regime fell, the ruling system was altered. The aforementioned provinces were to be dealt with according to Article 58 of the Law of Administration for the State of Iraq for the Transitional Period, which, when the permanent constitution was approved, was replaced with Article 140 of the constitution.

Article 58 stipulates that the Iraqi Transitional Government, and especially the Iraqi Property Claims Commission and other relevant bodies, shall expeditiously take measures to remedy the injustice caused by the previous regime’s practices in regard to altering the demographic character of certain regions, including Kirkuk

Clause B of the same article reads: “The previous regime also manipulated and changed administrative boundaries for political ends. The Presidency Council of the Iraqi Transitional Government shall make recommendations to the National Assembly on remedying these unjust changes in the permanent constitution.”

Additionally, clause C of Article 58 notes, “The permanent resolution of disputed territories, including Kirkuk, shall be deferred until after these measures are completed, a fair and transparent census has been conducted and the permanent constitution has been ratified.”

In 2005, the permanent constitution was approved and Article 58 was replaced with Article 140, which reads: “The executive authority shall undertake the necessary steps to complete the implementation of the requirements of all subparagraphs of Article 58 of the Transitional Administrative Law. The responsibility placed upon the executive branch of the Iraqi Transitional Government stipulated in Article 58 of the Transitional Administrative Law shall extend and continue to the executive authority elected in accordance with this constitution, provided that it accomplishes completely (normalization and census and concludes with a referendum in Kirkuk and other disputed territories to determine the will of their citizens), by a date not to exceed Dec. 31, 2007.”

After all these years, and even though the Iraqi constitution was ratified and the Kurds have participated alongside the Arabs in governing the state, the dispute over administrative borders is still deadlocked. Kurds still insist on the Kurdish identity of Kirkuk and some parts of Nineveh and Diayala provincs, amid vehement Arab objection.

Outhman noted, “The Baath party used to say that autonomy was a concept linked to the people and not to the land; the land was theirs. As far as I can see, the convictions of the current political leaders in regard to the federal system are different from ours. The majority of the influential powers are wishing for a strong, centralized rule fortified with armed forces in order to marginalize other groups. They do not believe in partnership, nor in the constitution they signed.”