Baghdad considers the Iraqi Kurdistan Region's deployment of peshmerga to the outskirts of Kirkuk to be escalatory and provocative, writes Abdel Hamid Zebari. 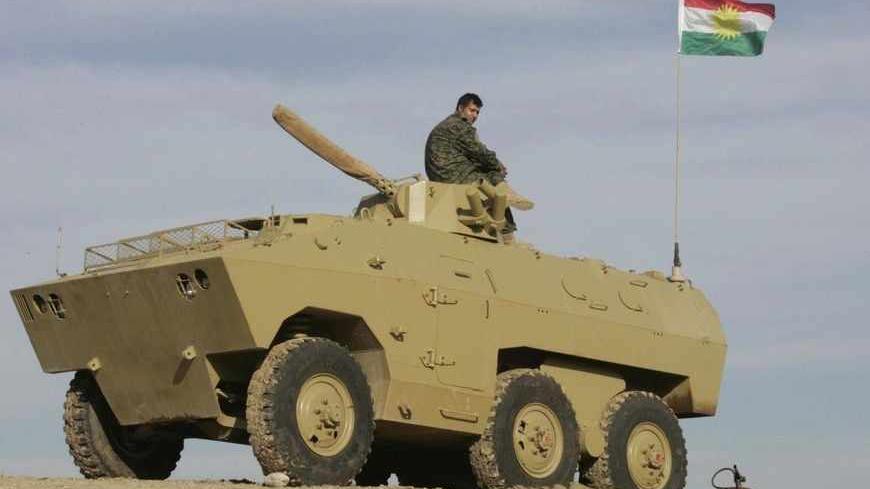 Kurdish peshmerga forces were deployed to the outskirts of Kirkuk to fill the security vacuum there and to thwart a sectarian war, which some believe to be just around the corner. According to the Ministry of Peshmerga Affairs, the move was coordinated with the governor of Kirkuk. Iraqi military forces, however, believe that the oil wells located in the area are the reason behind this move and consider it a breach of security agreements between Erbil and Baghdad.

In that regard, the Ministry of Peshmerga in the Kurdistan Regional Government (KRG) announced that it was merely filling the gap left by the Iraqi army in the disputed area out of fear that armed groups might infiltrate the region. The ministry reiterated that its aim was to protect all citizens and groups, regardless of political or religious affiliation.

The Ministry of Peshmerga released a statement saying, “The Iraqi army has been abandoning the majority of its barracks and bases affiliated with Squad 5 in Diyala, Squad 4 in Salahuddin and Squad 12 in Kirkuk and Ninevah, especially at night, for fear of being attacked by armed groups.”

The statement affirmed that “[this move] has led to a [security] vacuum in the areas surrounding the city and the affiliated townships, particularly in the outskirts of Kirkuk.” It continued: “In order to protect the lives of citizens of all national, societal, religious and sectarian backgrounds, and following a deliberation with the governor of Kirkuk, the Kurdistan peshmerga forces will fill the [security] vacuum in general and the vacuum in the areas surrounding Kirkuk in particular.

The statement pointed out that the move “aims at fending off the infiltration of armed terrorist groups and protecting the lives of citizens and military forces from terrorist operations.”

It also said, “The ministry’s intelligence data shows that these groups intend to carry out massive terrorist attacks, particularly in the city of Kirkuk.”

This is not the first time the Kurds have deployed their forces to these areas. A few months ago, when the federal government established the Tigris Operations Command in Kirkuk, Diyala and Salahuddin provinces, the Ministry of Peshmerga Affairs sent military reinforcements and prevented them from reaching Kirkuk. The Tigris Operations forces remained in the town of Tuz Khormato, south of Kirkuk, and a political crisis flared up between the central government and that of the Kurdistan region.

Following the Kurdish move, Ali Ghaidan Majid, commander of the Iraqi army’s ground forces, rushed to consider the deployment in Kirkuk to be a breach of the joint security agreement previously concluded between the Iraqi army and the Kurdish forces.

Ghaidan said the Kurdish moves are aimed at “oil fields and wells. This is a dangerous development.”

In a statement to Al-Monitor, Falak al-Din Kakai, a Kurdish leader in the Kurdistan Democratic Party (KDP) led by President Massoud Barzani, denied that the move was carried out unilaterally or underlay political aims to take over the region.

“We do not make unilateral moves; we coordinate with the other parties, whether in the federal government or the other Iraqi powers and political blocs. Our purpose is not to align with one party; we care deeply about preserving peace in the region, especially in the disputed regions. The mission of the peshmerga and the political leadership is solely peace. As Barzani affirmed recently, we support peace and we will become party to any treaty that conveys peace,” he added.

Kakai said deploying peshmerga forces to these areas exemplifies the peaceful role that Kurds can perform. He said, “[We are sending these troops] in case battles expand beyond our control and that of the government and other forces. However, we hope [these battles] remain contained.”

He said: “Unfortunately, all signs point in the direction of an escalating war. It will turn into a civil war and as such, the situation will be beyond the control of everyone.” He continued: “Who is able to contain the situation currently? We, as far as we are concerned, are preserving the security and safety of citizens of all backgrounds in the disputed areas. We are trying to avoid getting involved in any fighting.”

The Iraqi Kurdistan Region sees these areas as falling within its administrative borders, yet they are not under its governance.

In Article 140 of the Iraqi Constitution, a roadmap was laid out to settle the dispute over these areas by sending the Arabs away and allowing the Kurds who were deported during the rule of former President Saddam Hussein to return. Afterward, a census and a referendum was to be conducted so residents could decide whether they wanted to remain under the auspices of the federal government or join the KRG. The implementation of Article 140, however, has been hindered by political and security crises.

Political analyst Mohammed Sherif, a former Iraqi MP for the Democratic Patriotic Alliance of Kurdistan, said: “The deployment of peshmerga forces to these areas comes with security connotations, which supersede political connotations because the Iraqi army has retreated from these delicate regions that are threatened with a sectarian war. Peshmerga forces are in charge of preserving the security of the region and halting the infiltration of terrorists. They have to fulfill this task.”

Sherif said the tensions that exist along the border between the region and these areas — which are considered to be part of the Kurdistan region yet are in dispute — are affecting the security situation, upsetting citizens and impacting their business dealings and daily activities. If it was not for the military and security deployment, the situation would have been hazardous, he said.

He added, “The country is witnessing a dangerous situation. The Iraqi Constitution prohibits the army from suppressing citizens. Regardless of the aim of the demonstration that was staged in Hawija or in any other place that upsets the government, it was peaceful nonetheless and turning it into an armed protest was dangerous. This was caused by interference on the part of the army.”

Iraqi army forces stormed a protest being held in a public square in Hawija in Kirkuk province, leaving protesters in neighboring provinces enraged. In return, the protesters attacked army and police forces and members of the Sahwa forces, which resulted in a number of dead and wounded on both sides.

Residents of Sunni-dominated areas — Anbar, Ninevah, Salahuddin, Diyala, parts of Kirkuk, and Baghdad — claim that they have been marginalized ever since the ousting of the former regime in 2003. They accused Prime Minister Nouri al-Maliki of using counterterrorism and de-Baathification laws to unjustly target them. Maliki, on the other hand, reiterates that he is enforcing the law and following the constitution.

It is important to note that sectarian tensions in Iraq during 2006 and 2007 claimed the lives of thousands.