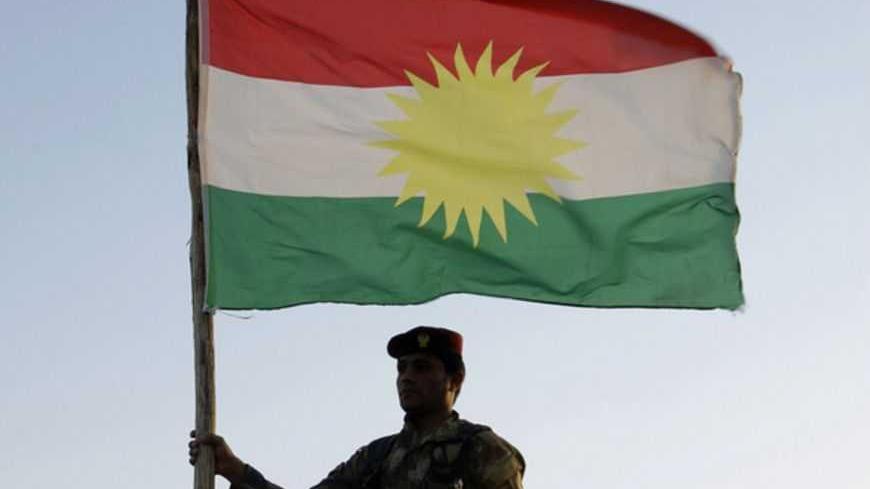 A Kurdish Peshmerga soldier holds a Kurdistan flag during a deployment in the area near the northern Iraqi border with Syria, which lies in an area disputed by Baghdad and the Kurdish region of Ninawa province, Aug. 6, 2012. - REUTERS/Azad Lashkari

It appears that a new conflict is brewing on the horizon between Iraq’s Kurdistan Regional Government (KRG) and the central Iraqi government headed by Nouri al-Maliki, following the latter’s announcement of the formation of a military force under the name of the “al-Jazeera and Badiya Force” headquartered in the city of Sinjar, which is part of disputed areas in Nineveh Province bordering Syria.

This new military dispute between Erbil and Baghdad comes a few months after the controversy of the Iraqi “Dijla (Tigris) Force,” which was stationed on the outskirts of Kirkuk and remains there, ready to face off against the Kurdish Peshmerga troops sent to the region.

The military mobilization in Mosul came as a result of the dispute that erupted between Kurdish and Iraqi forces in the Zemar region early last summer, when Iraqi governmental troops tried to take control of the Iraqi-Syrian border area, which falls within the territories of Iraqi Kurdistan in the Fishkhapour region.

Kurdish objection to the Iraqi army’s movements in the northern regions is not new, dating back to 2008, when the Kurds strongly opposed any Iraqi military movement in the “contested” areas between the two parties. Military confrontation nearly ensued in Khanaqin (east of Baghdad), when Maliki sent Iraqi army troops there to confront Kurdish Peshmerga forces.

The dispute intensified last year between the Kurds and Maliki, who was accused of ruling unilaterally, striving to restore totalitarian rule to the country, and failing to implement political agreements. Subsequently, the Kurds, in cooperation with the Iraqiya Bloc headed by Iyad Allawi, tried and failed to withdraw confidence from Maliki.

As soon as the Iraqi government announced a few days ago the establishment of the al-Jazeera and Badiya force headquarters in one of the Iraqi army’s former camps in the Sinjar district, Kurds were quick to object, with Sinjar residents demonstrating in the streets against the presence of such forces in the area. Jabbar Yawar, the official spokesperson for the Ministry of Peshmerga in the KRG, stated that “since 2010, and according to the agreement signed between the Kurdish Ministry of Peshmerga and the Iraqi Federal Ministry of Defense, neither side can deploy additional forces in the disputed areas without receiving consent from the Higher Ministerial Committee and the Supreme Labor Committee, based on the needs of the particular region.”

The “disputed areas,” to which Article 140 of the Iraqi constitution was dedicated, are defined as all the areas in which Kurds, Arabs, Turkmens, and Christians live, which were subjected to demographic or administrative transformations during Saddam Hussein’s reign, in the provinces of Kirkuk, Mosul, Salahuddin and Diyala, and are the subject of Kurdish annexation demands.

The Iraqi government justified the deployment of new troops with the need to protect the Iraqi-Syrian border from infiltration by gunmen affiliated with al-Qaeda; while the Kurdish leadership views the move as emanating from Maliki’s desire to control these areas and spread his influence over them in order to facilitate the flow of Iranian and Iraqi aid to Syrian government forces through the Rabia border crossing.

The past few days have witnessed the spread of the Syrian military conflict into Iraqi territories along the border region between the two countries, with gun battles erupting in the Syrian Yaarabiya border crossing adjacent to the Rabia crossing in Nineveh province, which resulted in the wounding of several Syrian regular army troops who were transported to an Iraqi hospital for treatment.

The Iraqi government also announced a few days ago that 48 Syrian and seven Iraqi soldiers were killed by gunmen when the Iraqi army tried to send back to their country Syrian troops who had escaped into Iraq following battles with Syrian opposition forces.

The Kurds believe that Iran is pressuring Iraq into providing military aid to the Syrian regular army in order for it to defeat the armed opposition. This belief is bolstered by the surprise visit of Iranian Foreign Minister Ali Akbar Salehi to Iraq a few days ago, which coincided with these developments on the ground.

Yawar stated that the Kurds had officially informed the Iraqi Defense Ministry that establishing these headquarters was not consistent with the basics of joint action.

Hundreds of Sinjar province residents had taken to the streets surrounding the Sinjar district seat and headed toward the Sinjar encampment (three kilometers south of Sinjar) to protest the establishment of the al-Jazeera and Badiya headquarters in the city. They also threatened to hold permanent sit-ins and erected tents on the public highway.

Sinjar district, which is adjacent to the Syrian border, is considered part of the disputed areas covered by Article 140. It is currently run by a Kurdish commissioner from Iraqi Kurdistan.

The city’s commissioner, Maisar Hajji, said that they did not need these troops in the city, because of the lack of adequate coordination between federal police forces, the Iraqi military and Peshmerga troops inside the city, which enjoys relative security and stability compared to other Iraqi regions.

The Kurdish and Iraqi governments had held a series of meetings to discuss the issue of military deployments in the Kirkuk area; but these meetings ended more than a month ago without result. The Ministry of Peshmerga stated that it was waiting for the Iraqi Defense Ministry to set a date for the next meeting.