After the Iraqi Council of Representatives passed its 2013 budget law despite a boycott by Kurdish parliamentarians, the Kurdistan Regional Government is struggling to determine how it will pay foreign oil contracts, writes Abdel Hamid Zebari. 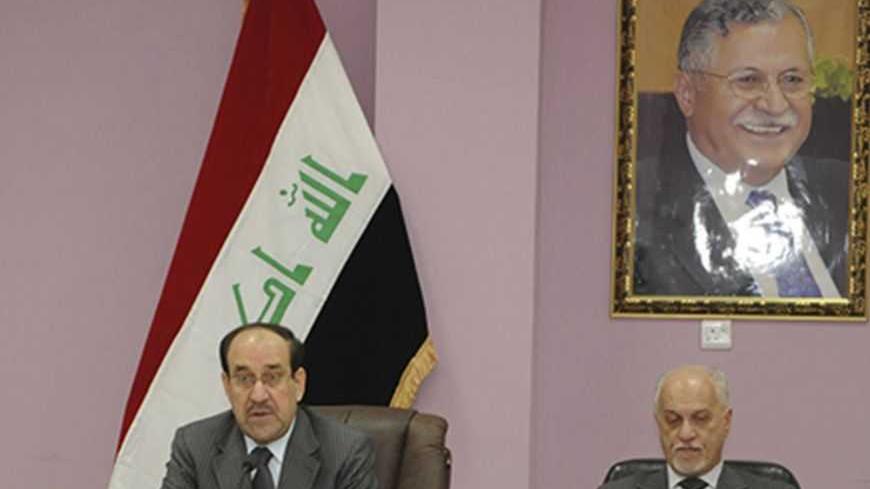 Through the ratification of the Iraqi Public Budget Law for the year 2013 in parliament based on the principle of "majority" rather than "consensus" — amid a Kurdish boycott of the parliamentary session — it seems that Prime Minister Nouri al-Maliki has put difficult choices before the Iraqi Kurds, which may manifest in the coming days.

The Iraqi parliament approved on Thursday [March 7] the country’s general budget of $119 billion. The session was boycotted by Kurdish deputies, and had been delayed for weeks due to several disagreements, most notably over the payments of foreign oil companies operating in the Kurdistan region.

The Kurdistan Regional Government (KRG) has asked the Iraqi government to pay the remaining dues of foreign companies, estimated at about $4.5 billion, while the federal government has only agreed to pay $750 million.

The dispute erupted in September 2012, after the Iraqi government paid around 650 billion Iraqi dinars [$558 million] out of 1 trillion [$858 million] owed, on condition that the Kurdistan region would produce 250,000 barrels of oil daily. Payment of the remaining dues was delayed, with the Iraqi government providing various excuses, prompting the Kurdistan region to stop the export of oil from the region’s wells through the Turkish Ceyhan line.

As soon as the federal budget law for this year was approved, the KRG announced its rejection of many sections of the law. It noted that the political parties that approved the law based on the principle of majority have overlooked the proposals and observations made by the Kurdistan region on the budget law, violated the rights of the people of Kurdistan and aborted the principle of national consensus and genuine partnership in power.

The KRG pledged to take all possible legal and constitutional action against this attempt, which aims to harm the interests and lives of the citizens of Iraqi Kurdistan.

The presidency of the Kurdistan region described the manner with which the budget law was passed as marginalization of a key component, a supposed founding partner of the political process and rebuilding the state, and a major ethnic group in determining the future of the country.

The position of the presidency of Kurdistan came after President of the Kurdistan Region Massoud Barzani called for an urgent meeting of all members of the Kurdish bloc in the government and parliament in Erbil to discuss the issue.

A presidential statement declared that "in a remarkable step that reinforces division in the Iraqi national ranks and monopoly of political power and the country's leadership, the federal budget was passed by the State of Law coalition led by Maliki without taking into consideration a major nationalist point of view.”

The Kurdistan presidential statement adds: “As we are forced to take this position, which is open to all options, we hold the State of Law coalition, Maliki, and their collaborators responsible for what might ensue, and possible positions and developments.”

Maliki has put the Kurds in a difficult position in the face of foreign companies operating in the Kurdistan region, which are demanding their dues after having waited for a long time, especially since they had been promised by the KG that it would resolve its legal differences with Baghdad.

The KRG has so far signed 50 contracts with foreign companies, which have invested $15 billion to $20 billion in oil exploration and production in the region. However, these companies cannot export oil without the consent of Baghdad or use it in any way because the company in charge of oil export is the Iraqi Oil Marketing Organization(SOMO), and returns go to the Iraqi fund.

The proportion of the general budget allocated to the Kurdistan region is over 15 trillion Iraqi dinars [$12.9 billion] for 2013, according to the 17% quota set for it within the Iraqi public budget. Should the KRG pay the due payments to foreign companies, it would lose half the budget. This would also put the Kurdistan region in an unnecessary financial quandary as it seeks more development and reconstruction.

Oil analyst and expert Wajid Shaker says that the federal government’s procrastination in paying the dues of foreign companies will force the Kurdistan region to pay the amount from the returns of oil being produced in oil wells in Kurdistan.

He told Al-Monitor: “I suppose that the Kurdistan region will take a position. The way to deal with the situation will be based on the KRG’s decision. However, I believe that [the KRG] is able to export oil and pay the dues of foreign companies.”

Last year, the KRG exported crude oil from wells in Kurdistan via Turkey, but in small amounts and without the consent of Baghdad, saying it adopted this plan to fill the shortage in oil derivatives after the Iraqi government stopped providing it with them, especially since the existing refineries in Kurdistan are unable to process the quantities needed by the local market.

Sources indicate that the Iraqi government’s insistence on not paying the dues of foreign companies operating in the Kurdistan region is a step it took to force these companies to stop signing contracts with the Kurds, despite the government’s constant warnings directed at these companies.

Shaker said that this would not prevent companies from coming to the Kurdistan region because they are carefully examining the issue: “Big companies like ExxonMobil and Chevron have legal and technical departments that correspond to the governmental technical departments in Iraq. They also have fields worldwide and enjoy a prominent status in the world of oil. They have studied the issue, know their interests and can obtain their rights.”

Shaker added, “It seems that the Kurdish position so far is limited to threatening to withdraw from the government headed by Maliki, then withdrawing from the political process in the country. In the final stage, [the Kurds] might adopt a tougher stance, the details of which the Kurdish leaders are withholding, since it is early to do that."

While Kurdish political analyst Abdul-Ghani Ali Yahya said in an interview with Al-Monitor that “the ratification of the Iraqi budget for 2013 by the Iraqi parliament, despite a boycott by the Kurdish bloc, contradicts the principle of consensus that has dominated political life in Iraq, albeit on a small scale, and will inevitably lead to the majority government advocated by the State of Law coalition, which is opposed by the Kurds and Sunnis.”

He added: “By ignoring the demands of the Kurdish bloc regarding the budget, unlike the other blocs, the ethnic conflict in Iraq will only deepen. Moreover, other Kurdish demands will be ignored in the future and create a sense of injustice and discrimination among them.”

The KRG announced in a statement that it will take legal and political action against the budget ratification, which was done without its approval. Yahya said: “What the Kurds can achieve is economic quasi-independence. However, their success depends on the responsiveness of the international community, particularly Turkey and the West.” He added, "Any solution to the ongoing conflict between the two governments and among Iraq’s social components will not be without the division of Iraq and the establishment of three states that are Shiite, Kurdish and Sunni."

Kurdish MP Chuan Mohamed of the Barzani-led Kurdistan Democratic Party (KDP) said: "The Iraqi government must deal with the Kurds as the second component, and our proposals and opinions must be taken into consideration.  We believe that what we were subjected to regarding the budget is tantamount to a genocide of the people of Kurdistan."