The Kurdistan Region of Iraq is struggling with the number of displaced Syrian Kurds flowing into the region, writes Abdel Hamid Zebari. 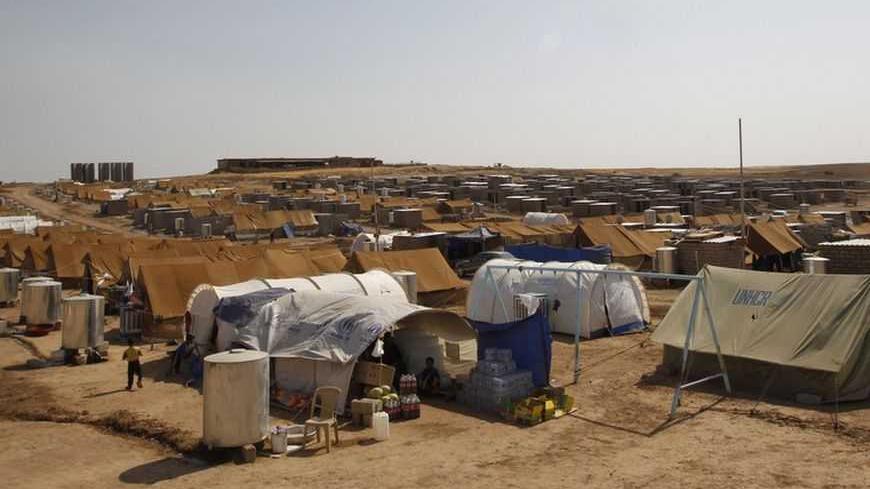 Members of a Syrian refugee family, who fled the violence back home, are seen at the Dumez refugee camp in the northern Iraqi of province Dohuk, July 25, 2012. - REUTERS/Thaier al-Sudani

When popular protests erupted in Syria, a mass influx to the Kurdistan region of Iraq began, particularly from the Kurdish majority areas in Syria. The flow of people reached numbers that exceeded the expectation of the Kurdish administration, which started to look for ways to provide refugees with shelter and assistance.

Since March 15, 2011, Syria has experienced popular protests that started with demands for democratic reform, and ended with demands to bring down Bashar al-Assad’s regime. These protests were met with bloody violence by the Syrian security forces and “thugs,” which has resulted in the death of more than 70,000 people, according to the United Nations High Commisioner for Human Rights. Moreover, tens of thousands of protesters are currently being detained in Syrian prisons, according to the SOHR. While there are hundreds of thousands of refugees, displaced and missing persons, the Syrian authorities accuse terrorist groups of being behind the violence.

The Kurdish-majority Syrian areas have not witnessed military operations between protesters and regime forces, and have stayed away from the military conflict. Yet, they have been directly affected by the difficult economic situation in the country as a result of the deteriorating security situation.

The latest statistics announced by the Kurdistan Regional Government of Iraq shows that the number of displaced has reached 74,000 in the region, while Kurdistan was preparing to receive at least a quarter of that number with the start of the conflict.

Dindar Zebari, deputy head of KRG's Department of Foreign Relations, told Al-Monitor that the total number of Syrians displaced and refugees in the Kurdistan region of Iraq had reached 74,994 of 83,958 people incoming people into Iraq.

The largest portion of displaced Syrians in the region reside in the Dumez camp in Dohuk province bordering Syria, where the number of refugees reached 30,000 out of more than 50,000 refugees in Dohuk. They numbered 15,989 refugees in Erbil, and 4,311 in Sulaymaniyah.

Zebari noted that all these refugees entered the region through the Iraqi-Syrian border crossings in al-Qaem, Al-Waleed and Rabia, then headed to the Kurdistan region of Iraq. He added that in the last week alone 7,319 refugees — mostly residents of the cities of Qamishli, Damascus and Aleppo — arrived in the region.

The Dumez camp — the only one for newly displaced Syrians in the region — was assigned to accommodate 10,000 refugees; the mass influx, however, forced the KRG to continuously expand the camp. Yet, the camp can no longer be expanded, after the number of displaced Syrians reached 30,000.

Zebari said that in collaboration with the World Food Program (WFP), the United Nations High Commissioner for Refugees (UNHCR) successfully provided continuous aid to refugees and paid each $30 per month to buy basic food.

Nonetheless, this aid is not enough, according to Zebari, who called on donor countries to provide Syrian refugees in countries neighboring Syria with international assistance, including those in Kurdistan.

Four thousand Syrian refugees used to live in the camp in Dohuk province. They arrived in 2004, when clashes erupted between the regime forces and Syrian Kurds in the city of Qamishli, called the “Qamishli Events”, which resulted in the death of a number of demonstrators and the arrest of hundreds by the Syrian regime.

The KRG decided to establish a camp in the city of Sulaymaniyah, after the number of refugees increased. They mostly live in large city centers in Erbil, Sulaymaniyah and Dohuk in houses where the most basic needs are lacking despite the cold weather.

In a phone call with Al-Monitor, Farouk Haji Mustafa — a Kurdish journalist and writer who currently resides in the Kurdish city of Malikiyah in Syria — said that two reasons are pushing Syrian Kurds to flee to the Kurdistan region, namely politics and the economy.  Politically, the future of the Kurds is unclear and the Kurdish political leadership cannot bring the attention as it should to the future of the Kurds. Economically, have begun to lose the basic necessities for survival.

The Kurdish National Council in Syria, which includes Syrian Kurdish opposition parties, anticipated migration to the Kurdistan region, due to the siege on Kurdish areas in Syria, and called on the KRG to open the border crossings and provide displaced Syrians with urgent assistance.

The Presidency of the Iraqi Kurdistan Region commenced delivering aid relief to the Kurdish majority areas in Syria on January 17, 2013, through the Faysh Khabour crossing, where aid was transported by boats to the Syrian side.

Mustafa said that thus far aid has not reached all areas and has been limited to areas near Kurdistan.

The Faysh Khabour crossing is located on the Tigris River, 50 km [30 miles] west of Dohuk, within the border of the Kurdistan region. It was established in 1991, linking both sides of the Iraqi-Syrian border by boats. It is also the only outlet linking Kurdistan to Syria. Following 2003, works at the crossing decreased, after the Rabia border crossing in Mosul province — 400 km [250 miles] north of Baghdad — was activated.