Despite protests from Baghdad, the Kurdistan Regional Government of Iraq is moving ahead with plans to develop the infrastructure for an oil pipeline to Turkey, reports Abdel Hamid Zebari. 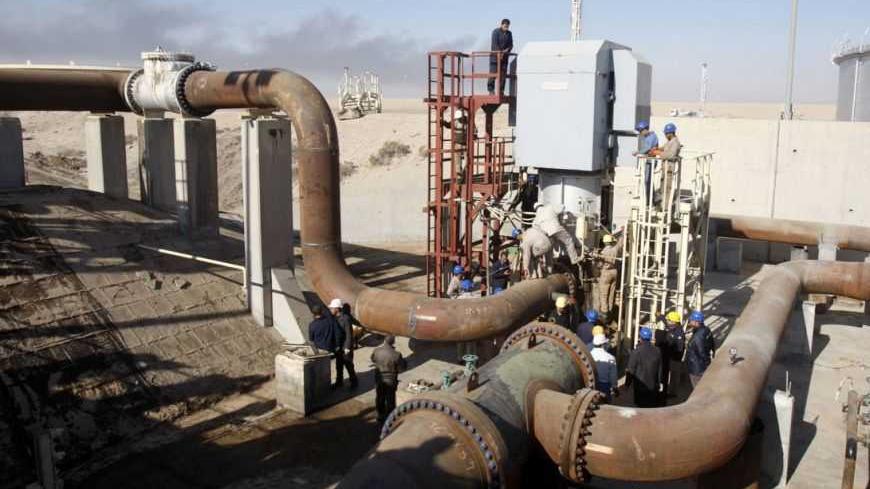 Employees of the state-run South Oil Co. join a new oil storage tank to the oil pipelines near the southern city of Basra, Jan. 14, 2013. - REUTERS/Atef Hassan

In light of escalating quarrels over oil between the Iraqi federal government in Baghdad and the Iraqi Kurdistan region — which maintains a quasi-independent authority — the Kurdish side insists on moving forward with developing its infrastructure in the oil sector. It will extend a pipeline connecting Kurdistan’s wells to the port of Ceyhan in Turkey, a move that will give the region independence in terms of energy and oil should the pipeline be completed.

Turkey has thus far not responded to the Kurdistan region's request to extend the new pipeline. Ankara has said that it is still studying the project. Meanwhile, the prime minister of the Kurdistan Regional Government, Nechirvan Barzani, said on Jan. 7 that "the region is serious about extending the pipeline to Turkey."

At the beginning of this year, the Kurdistan Regional Government allowed the General Energy Company to begin selling oil from the Taq Taq oil field directly to Turkey, which Baghdad considered illegal trade.

Oil disputes between Baghdad and Erbil broke out in 2009, after the latter signed a number of oil contracts with foreign companies. The Iraqi government in Baghdad objected to this project and said that it alone had the authority to sign such contracts.

The Kurdistan Regional Government (KRG) stated that it signed these contracts with foreign companies based on constitutional powers granted to it in the Iraqi constitution, which was voted on in 2005.

Article 111 of the Iraqi constitution stipulates that oil and gas are the property of all Iraqi people in all districts and provinces, while Article 112 states that “the federal government manages oil and gas extracted from the current fields, in cooperation with the producing districts and provinces, on the condition that it distributes the revenue equitably according to the population distribution throughout the whole country.”

The same article states that “the federal government and the producing provinces and regions must cooperate to establish the necessary strategic policies to develop the oil and gas resources in order to serve the best interests of the Iraqi people by using the the latest marketing techniques to boost investment.”

The Kurdistan region (located 350 km north of Baghdad) is currently Iraq's only federal region. Meanwhile, various cities such as Basra (500 km south of Baghdad) are struggling to become quasi-independent regions in order to gain more autonomy in the oil sector.

The Iraqi Kurdistan parliament issued in 2007 the Oil and Gas Law, according to which the region’s government entered into oil contracts with foreign companies. However, to this day, the federal parliament in Baghdad has not ratified this law and refuses to recognize it.

The government of Iraqi Kurdistan stated that its project to extend a pipeline to link the wells of the region directly to the outside world will be completed by the end of 2014 or beginning of 2015. A few years ago, the wells were connected to the Iraqi-Turkish pipeline which links Kirkuk to the Turkish port of Ceyhan.

Ali Balo, adviser to the Ministry of Natural Resources in the KRG, said: “Constructing an oil pipeline starting from the Kurdistan region carries great significance for Iraq as a whole.”

He told Al-Monitor: “Oil revenues will ultimately go to the treasury of the Iraqi government and then be distributed to all Iraqis. This would greatly benefit the Iraqi budget and income per capita in Iraq.”

He continued: “With the construction of this pipeline, the KRG will be able to settle the claims of foreign companies operating in the region without being subject to problems and to the central government’s erratic decisions.”

With each passing day, the problem of claims by foreign companies operating in the Kurdish region worsens, as the government in Baghdad has refused to pay these companies the amount they were owed a few months ago. Since then, the KRG has decided to halt oil exports from Iraqi Kurdistan’s rigs to the Turkish Ceyhan pipeline.

Baghdad concluded a deal with the KRG last summer to pay about $950 million in accruals to foreign companies. It paid the first installment of $650 million, but did not pay the remaining amount of $300 million.

Nechirvan Idris Barzani, prime minister of the KRG, said he hopes that the project to construct the proposed oil pipeline between the region and Turkey will be completed, stressing that it will be advantageous for Iraq as a whole, not just for the region.

The pipeline will link Iraq's Kurdistan Region oil fields, which are spread across the provinces of Erbil, Sulaymaniyah and Dohuk, most notably the Shiwashok oil field in Taq Taq, Khormala in Erbil and Tawki in Dohuk.

Iraq already has a pipeline to transport crude oil that extends from the city of Kirkuk — an area disputed by the two governments — passing though Turkey and down to the Turkish port of Ceyhan. Construction on the pipeline, which is 1048 kilometers in length, began in 1973. The network was expanded twice in 1983 and the final capacity of 1.75 million barrels per day was reached in 1987.

Iraqi Kurdistan’s oil reserves are estimated at about 45 billion barrels of crude oil and more than three trillion cubic meters of natural gas, drawing the attention of countries who consume the most oil.

Large international corporations took part in the discovery and production of oil in the region, most notably among them the American companies Exxon Mobil and Chevron as well as France’s Total and Russian Gazprom, all of which have been engaged in a broad controversy with the Iraqi government in Baghdad.

The KRG claimed that the British company BP’s activity in Kirkuk, by an agreement with the Iraqi Oil Ministry, was “an illegitimate and unconstitutional plan to invest in the fields without consulting or seeking the approval of the other parties in the conflict.”

Wajid Shaker, an oil expert, told Al-Monitor: “These problems will continue between the two governments. They will neither be addressed nor ended, unless the Iraqi parliament passes a law on oil and gas that resolves the responsibilities and capacities of various parties in handling the country’s energy resources."