Baghdad needs a more convincing oil strategy that addresses the concerns of the Kurdistan region, the provinces and the need for fair redistribution of revenues. 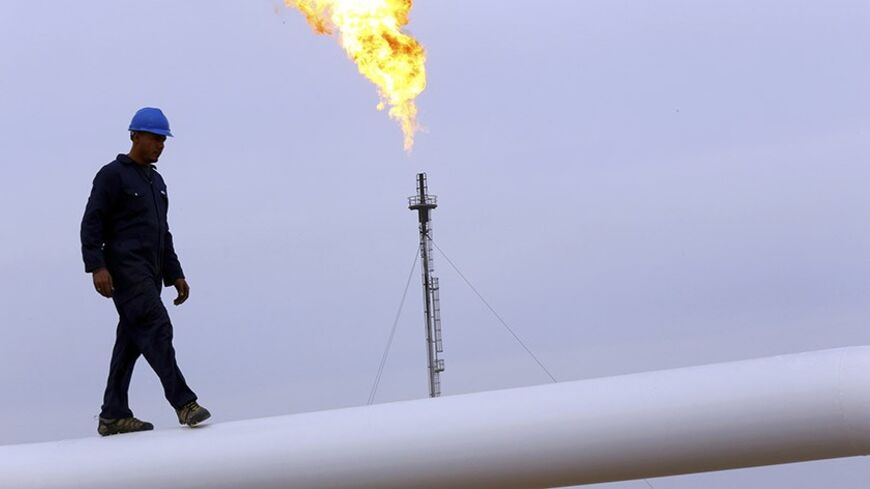 A worker walks on an oil pipeline at the Khurmala oilfield on the outskirts of Erbil, Dec. 4, 2013. - REUTERS/Stringer

As al-Qaeda continues to terrorize parts of Iraq, another battle looms over the country: control over Iraqi hydrocarbons and revenues. The Kurdistan Regional Government (KRG) is pressing ahead with its plans to independently export and sell Kurdish crude to Turkey, while Baghdad has threatened to cut the KRG’s budget and take legal action against Ankara. These tensions are occurring as oil-producing provinces are making their own oil and revenue demands, and threatening to boycott parliament and stage demonstrations. While this type of brinkmanship is common to post-Saddam Iraqi politics, it underlines the new fault lines that have emerged between Baghdad and provincial and regional authorities. These lines indicate that a viable power-sharing arrangement will be determined by fair access and distribution of the country’s oil wealth.

The heightened energy rhetoric reflects the opportunity to maximize political interests and leverage by Erbil and Baghdad. The KRG calculates that weakened Iraqi Prime Minister Nouri al-Maliki needs Kurdish backing in the forthcoming elections to win a third term. KRG support includes Peshmerga (Kurdish militia) security assistance against al-Qaeda threats, particularly in the disputed territories. The KRG’s strengthened position also is shaped by its energy sector successes, including a newly built pipeline that connects to the Iraqi-Turkish pipeline (ITP), oil contracts with major international oil companies (IOCs) and Turkish partnership. The KRG also is “fed up” with Baghdad and the numerous failed attempts to export its crude and secure consistent or full payment.

These developments have encouraged a more nationalist and less compromising KRG position. Whereas in 2010 the KRG recognized Iraqi State Oil Marketing Organization (SOMO) as having the sole right to export Kurdish crude, by 2013 it had denied SOMO’s role in Kurdish energy sector development. Instead, the KRG states that its newly created Kurdistan Oil Marketing Organization (KOMO) is now the region’s export agency. The KRG has also tendered sales of its crude in the Turkish port of Ceyhan via KOMO to affirm this right.

Baghdad, however, has a different perception of the KRG’s leverage and energy strategy. Aware of Erbil’s financial dependency on the Iraqi government and the region’s current financial woes — Sulaimaniyah banks have been without cash for weeks and civil servants have not been paid — some Iraqi officials are willing to “call the KRG’s bluff.” They, too, have heightened the threat level by using Iraq’s own trump card: withholding KRG revenues, which represent 95% of the KRG annual budget. Baghdad also has resorted to legal action, arguing that exporting natural resources from Iraq without federal government approval is equivalent to taking confiscated or stolen property. Neither Erbil nor Ankara can therefore legally load tankers in Ceyhan and sell Kurdish crude without the risk of international arbitration from Baghdad.

The Baghdad-Erbil energy dispute also involves the Iraqi provinces, which further complicates its resolution. Despite their shared anti-Malikism, demands for greater oil revenues, rejection of the 2014 draft budget and their admiration for the KRG’s accomplishments, the provinces do not necessarily support Kurdish oil, revenue and political demands. Iraqi populations disagree with what they perceive as the KRG’s “double standards.” They argue that the KRG wants federalism on its own terms; it is part of Iraq when it is to the Kurds’ advantage (obtaining revenues), but independent at other times. Another common criticism by Arab Iraqis is that the KRG has “taken too much from Baghdad without giving anything back”.

Further, even though Basra and other oil-producing provinces have threatened to stop oil production and boycott the parliament, they do not fundamentally challenge the territorial integrity of Iraq. Their claims are based on “fairness” of revenue distribution and greater decentralization. A key demand is an increase in the government petrodollar payment from $1 to $5 per barrel. Although other provinces have attempted to follow the KRG example by signing independent contracts with IOCs, such as Salahuddin and Wasit, they later affirmed Baghdad’s sole authority over the energy sector and canceled the contracts. Even Barzani’s commercial partner in Ninevah province, Sunni Arab governor Atheel Nujaifi, has indicated that any oil development in the province would be coordinated with Baghdad.

Indeed, Maliki needs KRG support, particularly as the crisis in Anbar rages and tensions with the Sunni Arab community continue. Still, there are limits to how far Maliki can go to assuage the KRG in light of the growing demands by provincial administrations and local populations for government services and revenues — all fueled by a sense of Iraqi resource nationalism. Some Iraqi officials have argued that Maliki could even lose votes if he supports Kurdish independent export and payment demands. Others have reframed the oil imbroglio as a financial issue; a drain on the Iraqi economy that Baghdad can no longer sustain, given last year’s $18 billion budget deficit. Hence, Baghdad cannot afford to pay the KRG without Erbil’s contribution to the federal budget, which includes exporting 400,000 barrels per day via SOMO. These financial strains could increase further if Baghdad recognizes the creation of three new provinces, which would be eligible for their own budgets.

Despite the rhetoric, negotiations between Baghdad and the KRG continue, and short-term agreements are likely to be made before the April elections. Yet, the key issue of who controls oil and money extends beyond the Baghdad-Erbil dispute and into the provinces, which makes the problem a larger one of determining relative gains. For the KRG, the challenge is not only convincing Baghdad of its export and revenue rights, but other Iraqi provinces and populations who regard natural resources as part of Iraq’s national wealth to be distributed among Iraqis first. Still, the onus of responsibility lies with Baghdad. To maximize Iraqi energy sector potential, Iraqi officials will have to devise a more convincing strategy that assures its control over energy resources, incorporates the provinces and KRG fairly into this plan, and assures an equitable distribution of revenues to Iraqi populations.