There might be a short-term fix before the Iraqi elections in April, but a lasting solution on the Baghdad-Erbil hydrocarbon question is not imminent. 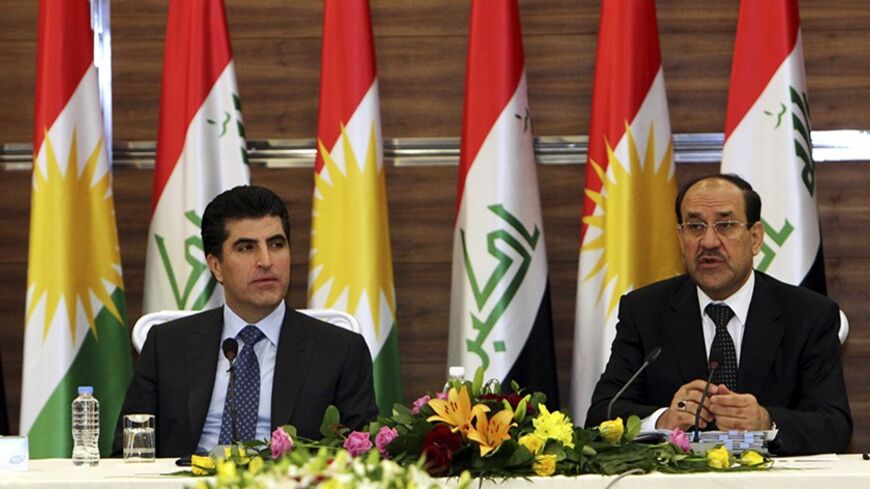 Iraqi Prime Minister Nouri al-Maliki (R) speaks next to his Iraqi Kurdish counterpart Nechirvan Barzani during a meeting of the Council of Ministers in Erbil, June 9, 2013. - REUTERS/Azad Lashkari

The ongoing tit for tat between Baghdad and Erbil over oil-export rights and revenues has escalated over the past two weeks, leading to the Kurdistan Regional Government's (KRG) most serious banking crisis since 1991. In the absence of an agreement, Baghdad has withheld part of the KRG’s revenues, resulting in non-payment of some civil servant salaries for two to three months, including the Peshmerga forces and the Oil Protection Force that guards international oil company (IOC) installations. KRG President Massoud Barzani has responded harshly by equating Baghdad’s actions to a “declaration of war on the people of Kurdistan” while claiming the ability to pay salaries from KRG funds.

Despite employing nationalist rhetoric, staging anti-Maliki protests, blaming the United States for a lack of support and pressing IOCs for payments, the KRG’s efforts to leverage Baghdad and independently export oil remain ineffective. Alongside ongoing legal, political and technical obstacles, the KRG’s key ally and energy partner, Turkish Prime Minister Recep Tayyip Erdogan, is facing his own domestic crisis and an uncertain political future. In the absence of a legal transit route or viable alternative revenue source, and with mounting criticism by local populations and investor confidence to sustain, Erbil will be hard-pressed to compromise with Baghdad. If not, the landlocked region risks undermining the economic and political gains it has made thus far while leaving its population and key institutions vulnerable to social, political and financial instability.

Until now, few believed that Baghdad would go so far as to withhold the KRG budget as a retaliatory measure. Although the Iraqi government and KRG have been disputing payments since 2005, the KRG has continued to receive its expanding annual budget from Baghdad. In 2013, the region was allocated about $13 billion to administer three provinces, relatively more than other oil-producing provinces in Iraq. Nor did Baghdad effectively thwart the KRG’s energy sector development. Its “blacklist” against IOCs working in the Kurdistan Region has hardly deterred oil majors from signing contracts with the KRG and exploiting hydrocarbons.

It was only when the KRG crossed Baghdad’s red line by attempting to circumvent state sovereignty and export oil unofficially to Turkey that Iraqi officials fully utilized their revenue card. The current crisis also imploded in response to Baghdad’s 2014 draft budget, competing claims by other oil-producing provinces for greater decentralization and revenues and the KRG’s opaque financial demands. It has now become part of campaign politics as both Barzani and Iraqi Prime Minister Nouri al-Maliki use the oil and budget issues to affirm their authority and nationalist credentials and cut the best deal possible before the April elections.

Indeed, the crisis has heightened criticism by Kurds of the Iraqi government. Many blame Maliki for withholding revenues, arguing that the Kurds are victims of Baghdad once again. Yet local populations also argue that the crisis is due to in part to the KRG’s mismanagement of funds and lack of transparency in financial affairs. One parliamentarian from the Gorran movement stated that as the KRG has been selling oil for years, it should be able to pay six months of salaries based on its oil revenues. Similarly, the head of the Kurdistan Central Bank, Edehem Karim Derwish, stated that the crisis is not simply an issue of Baghdad refusing to send money to the KRG. Rather, Baghdad is withholding cash flows to Erbil because the KRG is withholding clear information regarding its oil shipments and revenues. Worse still, the KRG has made no plans for financial emergencies. While Baghdad has $80 million in reserves in its state banks, the public banks in the Kurdistan Region have nothing.

The crisis has also spilled over into the KRG’s energy sector, particularly as it relates to security operations and the Oil Protection Force. The KRG’s Ministry of Natural Resources has indicated that KRG security forces remain proactive in defending the region and there is no discussion of the protection force leaving its posts; however, it has warned IOCs to remain vigilant at rig sites. The ministry has also given IOCs the option of (re-) hiring their own private security guards — a retrenchment from a 2011 edict demanding all IOCs release most of their international security personnel and employ only the KRG’s Oil Protection Force.

Securing revenues also has created tensions between the Ministry of Natural Resources and some IOCs. According to a local Western oil company representative, the ministry is pressing IOCs to pay their outstanding Oil Protection Force bills by March 1, 2014. In a recent meeting with IOCs to discuss the financial crisis, Minister of Natural Resources Ashti Hawrami criticized those IOCs — including key oil majors — for not paying their protection force bills and indicated that nonpayment would not be tolerated. Thus far, only about 5-10% of IOCs have currently paid, and the total payments could be about $150 million.

Some KRG officials and individuals have stated their intentions to use additional cards to pressure the Iraqi government. They initially threatened to obstruct parliamentary politics in Baghdad, decrease water supplies to Arab farmers from KRG dams, block Kirkuk oil from being transported to Turkey and declare independence. Baghdad immediately responded by threatening to close the airspace in the Kurdistan Region, blocking all flights to and from Erbil and Sulaimaniyah.

Despite these tactics and threats, it seems likely — or imperative — that both sides will negotiate an agreement before the election — although it would be a short-term deal at best. Even then, the crisis has reinforced the vulnerability of the KRG and its dependence on Baghdad. With over 60% of the population dependent on the KRG for salaries and even more on social welfare benefits, and a government still unformed nearly six months after regional elections, the KRG may have to rethink its energy, political and financial strategies moving forward. One essential step is to create transparent institutions to manage the region’s energy wealth, particularly a sovereign wealth fund for future generations. Failure to do so will have greater repercussions on local populations, economic and energy sector development and domestic stability.