Erdogan not giving up on gas from Iraqi Kurdistan

Erdogan appears bent on advancing energy deals with Iraqi Kurdistan, even as a gas project remains bogged down by legal, technical and financial snags. 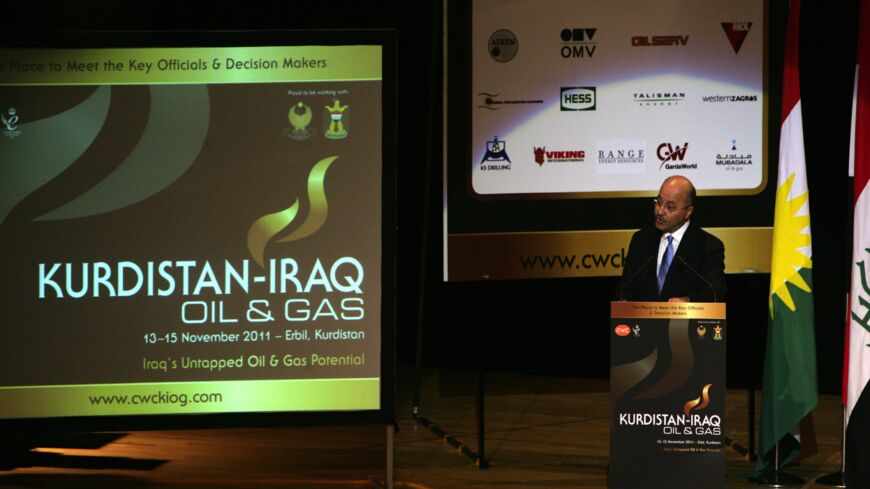 The Iraqi Supreme Court’s Feb. 15 ruling that proclaimed Iraqi Kurdistan’s oil and gas law unconstitutional has cast a shadow on Turkish President Recep Tayyip Erdogan’s hopes to buy gas from the autonomous region, coming atop an arbitration case over Ankara’s oil trade with the Iraqi Kurds that bypasses Baghdad. Counting on his political and economic leverage, Erdogan might ignore the court ruling, just as he has maintained the oil trade, ignoring the prospect of Baghdad winning the arbitration case. Yet the gas project faces financial and technical snags that Erdogan could hardly ignore.

Turkey’s access to Kurdistan’s energy resources dates back to the days when the United States prepared to invade Iraq and the Iraqi Kurds sought out energy investors, convinced that Saddam Hussein’s rule would be over soon. During a trip to Ankara in March 2002, Jalal Talabani, the late Iraqi Kurdish leader who at the time headed the Patriotic Union of Kurdistan, met with Mehmet Sepil, the owner of Turkish construction company Epik. Sepil, whose experience was limited to construction projects at US and NATO bases, was caught off guard when Talabani offered him the development of the Taq Taq oil field, predicting big profits for early investors. Sepil partnered with Mehmet Emin Karamehmet, the owner of Turkey’s Cukurova Holding, to set up Genel Energy, which soon commenced operations at Taq Taq under a production-sharing contract.

Genel Energy expanded its operations to many other fields in the ensuing years, forming several consortiums before merging with Vallares, a London-based investment company, in 2011.

Meanwhile, Iraq adopted a new constitution in 2005, followed by an oil and gas law two years later. Iraqi Kurdistan promulgated its own oil and gas law in 2007. The federal legislation stipulated that Baghdad should manage oil resources together with regional governments and provinces. Oil and gas extracted in Kurdistan was to be sold via Iraq’s state-owned company, SOMO, and Kurdistan was to receive 17% of the federal budget. But things unfolded otherwise on the ground.

Defying objections, Kurdistan awarded contracts to foreign companies and, in 2009, launched oil exports from the Taq Taq and Tawke fields. In 2012, a 1974 oil deal between Ankara and Baghdad expired, and Erdogan — at odds with Iraq’s then-premier Nouri al-Maliki — struck a 50-year energy deal with Erbil the following year. Under the deal, the Turkish Energy Company received licenses for 12 exploration blocks in Iraqi Kurdistan. It was a remarkable shift on the part of Ankara, which only several years before had rejected the involvement of Kurdish gas in a planned pipeline to Europe on the grounds it would help Kurdistan pursue independence.

The Ankara-Erbil deal involved the construction of a new pipeline in Iraqi Kurdistan to bypass the Iraqi section of an existing pipeline from Kirkuk to Turkey’s Mediterranean port of Ceyhan, as well as the construction of a gas conduit from the Miran and Bina Bawi gas fields to the Turkish border. The oil pipeline was quickly completed and became operational in 2014. Meanwhile, Powertrans, a company allegedly linked to Erdogan’s son-in-law Berat Albayrak, transported crude from Iraqi Kurdistan by land. Busy truck traffic from 2009 to 2013 saw up to 500 vehicles loading oil per day. The Kurdish crude was carried to Ceyhan and then sold to Israel and some murky companies. It made its way also to Turkey’s largest refiner, TUPRAS, in Kirikkale.

But unlike the flourishing oil activities, gas projects in Kurdistan have faltered.

The gas from the Khor Mor and Chamchamal fields, extracted by Crescent Petroleum and Dana Gas, goes to power plants in the region. But export-oriented investments remain insufficient particularly in the Miran and Bina Bawi gas fields. Turkey’s state pipeline operator, BOTAS, has extended its pipe network to the border, while a 180-kilometer (112-mile) conduit has yet to be built on Kurdistan’s side as part of the initial plans to export 20 billion cubic meters of gas per year.

Arif Akturk, the former director of Genel Energy’s gas project in Kurdistan, told Al-Monitor that a combination of political, financial and technical factors had led Turkey, a prospective buyer of gas from the Miran and Bina Bawi fields, to gear down.

First, Iraq lodged an arbitration case against BOTAS in 2014 over Kurdistan’s unilateral oil shipments to Turkey — a move that deterred investors and financiers.

The arbitration tribunal is expected to order Turkey to pay up to $25 billion in compensation to Iraq. Yet BOTAS’ deal with the Iraqi Kurds contains a little-known provision that the liability of any legal sanctions arising from the oil trade will be transferred to the Kurdistan administration. According to Akturk, Ankara would refuse to pay any penalty and pass the bill to Erbil instead. Erbil, for its part, appears incapable of paying such a sum. A compensation showdown between the three parties might strain Turkey’s ties with Iraq and rekindle independence ambitions in Kurdistan.

Second, Kurdistan’s independence referendum in 2017 caused some reluctance on energy projects in Ankara.

Third, Akturk drew attention to technical and financial snags. The high sulfur content of the Miran and Bina Bawi gas fields requires additional processing and is a thorn in the project’s side. Sulfur has a market value as a raw material for the fertilizer industry, but the mountains of sulfur granules that emerge from the desulfurization process require prompt removal to prevent them from mixing with rain and transforming to sulfuric acid with toxic impacts on the environment. Railway transport is seen as the most convenient way to carry the sulfur to fertilizer industries or export outlets. In other words, sulfur kills gas projects unless a proper processing facility and other infrastructure are built.

A processing facility cost $4.5 billion in 2018, according to Akturk. Preliminary work with a Chinese company before the independence referendum failed to ripen into a deal. Genel Energy, which has invested more than $1 billion in Miran and Bina Bawi, suggested prioritizing oil extraction at different levels underground and returning to the gas project afterward should the conditions improve, but Erbil refused, wary of discouraging gas investors. In December, Genel Energy announced it was starting arbitration for “substantial claims” against Erbil after the latter refused to separate oil and gas projects and terminated the company’s production sharing contracts.

According to Akturk, pipeline construction is a relatively easy task that could be completed in about a year and a half for $350 million on flat terrain.

Pointing to another snag, he said Turkey needs to give a purchase guarantee through an intergovernmental agreement or no lender would be willing to finance the project. While oil could be sold even on the backs of mules, the gas industry requires more integrated investments, distribution and sales guarantees. “The gas processing plant requires about $4.5 billion and the wells $2.5 billion. No one in the industry can finance this with equity capital,” Akturk said. “For the processing plant, in particular, one needs to knock on the door of financiers, and they would want to see a purchase guarantee agreement. A transportation agreement is not enough,” he added.

In another deterrent factor here, the Ankara-Erbil partnership has lacked transparency and supervision.

Turkey’s Energy Market Regulatory Board has licensed Siyah Kalem, a company with zero experience in the sector, to import gas from Iraqi Kurdistan. It has granted a similar license to Cengiz Holding, a business group close to the government, in light of the needs of its power plant and fertilizer factory. Both companies have failed to achieve anything.

But despite the many handicaps, Erdogan’s interest in Kurdish gas appears to have reawakened. Why?

On Feb. 2, Nechirvan Barzani, the president of the Kurdistan Regional Government (KRG), traveled to Ankara to discuss the issue with Erdogan. The meeting followed Iran’s 10-day cut of gas supplies to Turkey. Several days later, Ali Hama Salih, the head of the energy commission in Kurdistan’s parliament, said a gas pipeline to Turkey would become operational in 2025. Then, KRG Prime Minister Masrour Barzani discussed Kurdistan’s gas potential and regional energy cooperation with Qatar’s energy minister, signaling some potential quest on the Erbil-Ankara-Doha triangle.

Meanwhile, Erbil concluded a deal with KAR Group in December to build a pipeline from the Khor Mor field to Erbil and from there to Dahuk. The conduit is intended to serve domestic needs, but once it reaches the power plant in Dahuk, the remaining distance to the Turkish border would be only 35 kilometers (22 miles).

According to Akturk, Qatar is unlikely to step up to the plate and the Kurdish gas is unlikely to become an alternative to Iranian supplies for Turkey, though it would help diversification.

The coalition bickering in Baghdad and Iranian influence might have had a role in the Iraqi court ruling, but Kurdistan’s unilateral energy deals have clearly faced an extensive front of objections. A key question now is whether Erdogan will insist on the Kurdish gas despite the court ruling. The arbitration case has not deterred Ankara from the oil trade. Counting on Turkey’s clout, Erdogan may be hoping to untangle the gas knot after the Iraqi government is formed. After all, “It'll be alright on the night” is an approach he has often employed.

Editor's note: An earlier version of this article incorrectly stated that Genel Energy formed a consortium with Dana Gas.