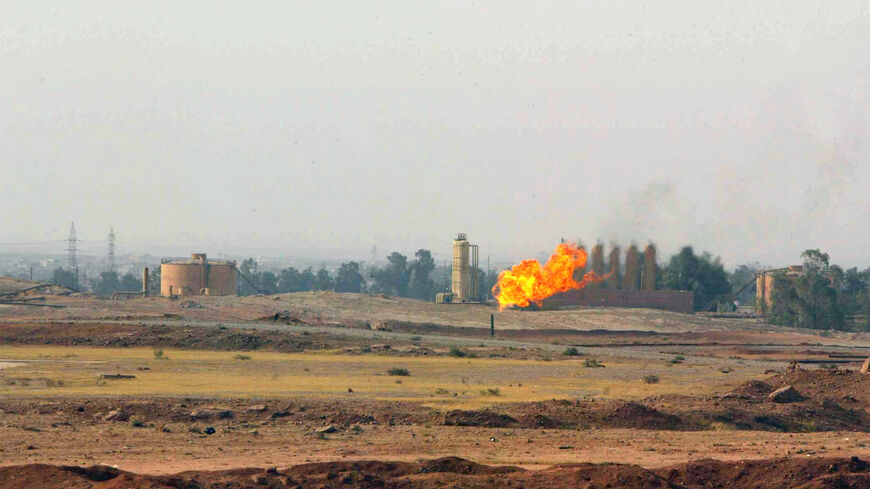 A gas flare burns in a field close to the northern oil-rich city of Kirkuk, 225 kms from Baghdad on Nov. 2, 2009. - MARWAN IBRAHIM/AFP via Getty Images

Potential projects to carry Iraqi Kurdistan natural gas to Europe via Turkey, in order to reduce dependency on Russia, might also increase rivalry between Turkey and Iran.

Citing Turkish and Iraqi officials, Reuters reported Mar. 28 that a potential plan to carry Iraqi Kurdish gas through Turkey with the help of Israel was one reason for Iran's missile attack on Erbil on March 13.

The Islamic Revolutionary Guard Corps made no mention of that factor in its statement on the attack, which came after the killing of IRGC operatives near the Syrian capital Damascus in an Israeli airstrike in early March. The attack targeted Israeli intelligence presence in Erbil, the IRGC said.

KAR reached an agreement with the Erbil administration in December to build a pipeline from the Khor Mor field in southern Kirkuk to carry gas to Erbil and from there to Dohuk. The conduit is intended to serve domestic needs, but once it reaches Dohuk, the remaining distance to the Turkish border would be only 35 kilometers (22 miles). Under an energy cooperation deal between Ankara and Iraqi Kurdistan in 2013, Turkey has already finished the pipeline linking its border with northern Iraq to a conduit which carries Azeri gas to Europe.

“I am not in a position of government to talk about marketing the gas of the Kurdistan region,” Barzinji told Reuters. He added that current production meets only 50% of the local need and that gas would not be exported if local consumption is not met — casting doubts over statements by Erbil that the region could start to export its gas as soon as 2025.

Erbil has amped up its efforts to boost its energy ties with regional actors amid escalating tensions between Russia and the Western capitals over Ukraine. Iraqi Kurdistan President Nechirvan Barzani met with Turkey’s President Recep Tayyip Erdogan in Ankara on Feb. 2. Ali Hama Salih, the head of the energy commission in Kurdistan’s parliament, said Feb. 9 that the gas link to Turkey would become operational in 2025. KRG Prime Minister Masrour Barzani discussed Kurdistan’s “huge gas potential” with Qatar Energy Minister Saad Al-Kaabi during his visit to Doha on Feb.16.

The Iraqi Federal Supreme Court struck down Iraqi Kurdistan’s oil and gas law Feb. 16, but has hardly slowed down Erbil’s efforts. Most recently, Masrour Barzani announced Mar 28 that Iraqi Kurdistan would “become a net exporter of gas to the rest of Iraq, Turkey and Europe in the near future and help meet their energy security needs,” speaking at Atlantic Council’s Global Energy Forum in Dubai.

While echoing previous assertions that Israel has no involvement in the plans, Barzani also admitted that Iraqi Kurdistan’s expanding energy ties were not in line with Iranian interests. The prime minister also said that in addition to missile attacks, some Iraqi institutions were manipulated into opposing the Iraqi Kurdistan region in an apparent reference to the court ruling.

In a similar vein, Erdogan said Turkey was gearing up for new energy projects. On his way back from Brussels, where he met with various NATO leaders, he told reporters, “God willing, through our meetings new avenues will be opened for Turkey in the energy field.” That hints at possible markets for Iraqi Kurdish and Eastern Mediterranean gas following normalization of ties with Israel.

“Kurdistan's oil is exported to Afghanistan via Iran. Natural gas should not be seen as a strategic threat to Iran,” Wali told Al-Monitor, adding that Tehran has no problem with Erbil making money through its oil and gas. According to Wali, Iraqi Kurdistan cannot export gas for at least five years due to production capacities and infrastructure constraints.

Wali also said Barzani has ignored repeated signals from the Iranian side to dissuade him from supporting Sadrists. “But Barzani persisted. The attack is the outcome of this persistence. It has nothing to do with natural gas.”

The journalist added that Iran was endorsing an alternative gas route to carry Iraqi gas through Jordan, bypassing Turkey, but the plan failed to receive a green light from Iraqi Prime Minister Mustafa al-Kadhimi.

Aside from Iranian anger, Ankara has other disagreements with Bagdad to resolve before a potential gas project with Iraqi Kurdistan. These include a dispute over water resources; Turkish military bases in Iraq and ongoing military operations against the outlawed Kurdish militants in the Iraqi territory; and a controversial deal to sell Iraqi Kurdish oil bypassing the central government. The missile attack on the Turkish military in Bashiqa near Mosul in February, indicates the growing ire in Baghdad, particularly among pro-Iranian circles, over Turkey’s efforts to increase its foothold in the country.

Bagdad lodged an arbitration case against Turkey’s state pipeline operator in 2014 over Kurdistan’s unilateral oil exports to Turkey under the 2013 deal. The arbitration tribunal is expected to order Turkey to pay up to $25 billion in compensation to Iraq. A deal on gas would likely result in a similar case.

In sum, a Sadr-led coalition in Bagdad can indeed diminish Tehran’s influence over potential projects between Turkey and Iraq. But Ankara still has to find a middle ground between Erbil and Baghdad to advance its gas and oil cooperation with Iraqi Kurdistan.