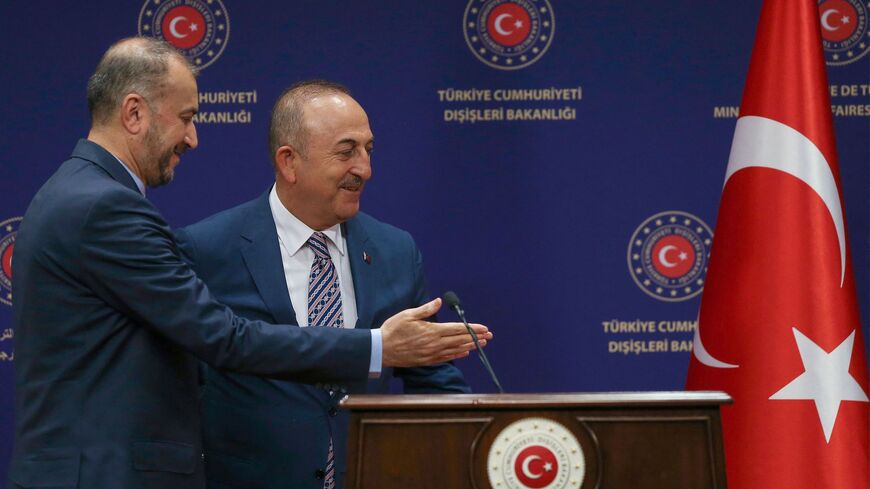 Iranian Foreign Minister Hossein Amir-Abdollahian was scheduled to be received by Turkish President Recep Tayyip Erdogan in Ankara today, part of an effort to manage growing tensions between the prickly regional rivals.

Upon his arrival, Amir-Abdollahian said he would be discussing “comprehensive long-term cooperation” between Iran and Turkey with his Turkish counterpart Mevlut Cavusoglu and Erdogan.

The Iranian diplomat's meeting with the Turkish president had not ended as of time of publication.

The visit comes just days after Israel’s Foreign Minister Yair Lapid was in Turkey, where he thanked Turkish leaders for foiling an alleged Iranian assassination plot against its citizens in Istanbul. Turkey detained eight members of an alleged Iranian thought to be conspiring to murder Israeli tourists and a former Israeli ambassador in apparent retaliation for ongoing killings of high-value Iranian targets by the Jewish state. Iran denied the allegations, saying they were “baseless.”

"We consider the fake Israeli regime the number-one enemy of Muslims and the Islamic world,” Amir-Abdollahian said in a joint news conference with Cavusoglu.

Israel warned its citizens to avoid traveling to Turkey following the assassination in late May of Col. Hassan Sayad Khodayari in Tehran. Khodayari, a member of the Islamic Revolutionary Guard Corps’ Quds Force, was supposedly involved in the killings of Jews and Israelis across the globe.

Turkey’s open-door policy with Iran, under which citizens from both sides can travel to the other without visas, “provides easier logistics for Iranian plans to target Israeli tourists,” noted Gallia Lindenstrauss, a senior research fellow at Tel Aviv University’s Institute for National Security Studies. The policy is unlikely to change.

In any case friction over Israel, which has deepened as Turkey mends fences with the Jewish state, has taken a back seat to Iran’s other big concerns, observers say. “Syria and Iraq are at the top of the list,” contended Hamidreza Azizi, a CATS fellow at the German Institute for International and Security affairs who focuses on Iran’s relations with Turkey. “Iran is deeply worried about the prospect of a new Turkish military operation, especially if it’s going to involve Tel Rifaat,” Azizi told Al-Monitor. He was referring to the Syrian town south of Aleppo that is close to the Shiite-majority town of Nubl and Al-Zahra that could also act as a gateway allowing Turkey and its Sunni rebel allies to expand their influence around Aleppo. The prospect is of equal concern to the Syrian regime and its main patron, Russia.

“From Iran’s point of view, this could be a prelude to the further expansion of the influence of Turkey toward central Syria, enabling it to limit Iran’s influence and create a new headache for the Syrian regime,” Azizi added. Erdogan renewed vows to conduct another military operation against the Syrian Kurds today. "As soon as we finish our preparations for the completion of a security belt along our border with Syria we will start a new operation there," Erdogan after meeting with members of his cabinet. The Iranian minister suggested that his government may be on board, despite Iran's well known misgivings. "We understand that maybe a special operation might be needed. Turkey's security concerns must be tackled fully and permanently," Abdollahian said.

Iran’s other concern is Iraq, where Turkey is trying to limit Iran’s influence in the Iraqi political sphere by facilitating the formation of a unified front composed of the Kurdistan Regional Government and the country’s main Sunni faction.

At the same time, the escalation in Turkey’s military operations in Iraqi Kurdistan has raised concerns among Iran and its affiliated Shiite groups that Turkey may seek to establish a permanent sphere of influence in northern parts of Iraq. Those worries were sharpened by KRG Prime Minister Masrour Barzani’s comments earlier this year about selling Iraqi Kurdish gas to Europe via Turkey to offset supply deficits stemming from sanctions on Russia over its invasion of Ukraine.

It’s hardly a coincidence that the Khor Mor gas field in Iraqi Kurdistan’s Sulaimaniyah province was attacked multiple times last week. The KRG Security Council said the attacks came from Kirkuk and had been directed by Iran-backed Hezbollah militants. Turkey is the KRG’s closest regional ally and top economic partner.

In March, Iranian cruise missiles struck the residence of Sheikh Baz Karim Barznji, CEO of the Kurdish oil company Kar Group, which exports Iraqi Kurdish crude via a pipeline to Turkey. Iran said the attack targeted Israeli interests in Iraq, but the message was almost certainly intended for Barzani. The Iraqi Kurdish leader announced Sunday that reinforcements had been sent to Khor Mor and that he had spoken to White House Coordinator for the Middle East and North Africa Brett McGurk and Iraqi Prime Minister Mustafa al-Khadimi.

"The cowards behind the attacks have resorted to terror tactics because they have lost the court of public opinion in the rest of the country. Rather than focus on the future and economic integration to lift all of the country, lawless groups have resorted to rocket attacks on our villages and civilians," the Kurdish premier said in a statement.

Why does Iran, a top producer of oil and natural gas, feel so threatened?

“Iraq burns its own gas and buys Iranian gas above the market price, so whatever the Iraqi government and the KRG does to develop its own gas goes automatically and naturally against what Iran is doing, which is deepening that dependency that Iraq has developed for Iranian gas and Iranian electricity,” explained Bilal Wahab, a senior fellow at the Washington Institute for Near East Policy. “If the KRG were to sell its gas and not use it for domestic consumption it would be selling it to and through Turkey. If the KRG thereby contributes to Turkey becoming an energy hub for Europe, that goes against what Iran is trying to do.”

But on a wider regional scale, “what worries Iran the most is that Turkey has been improving its relations with Iran’s rivals, particularly Israel and Saudi Arabia,” said Azizi, the Iranian analyst.

“This dual-track rapprochement, along with the aforementioned factors specific to Iraq and Syria, has created the perception in Iran that a regional front might be in the making with the participation of Turkey, Israel and the Arab states of the Persian Gulf with the primary aim of confronting Iran,” Azizi said.