The resumption of El Al cargo flights to Turkey does not mean that relations between Israel and Ankara have thawed. 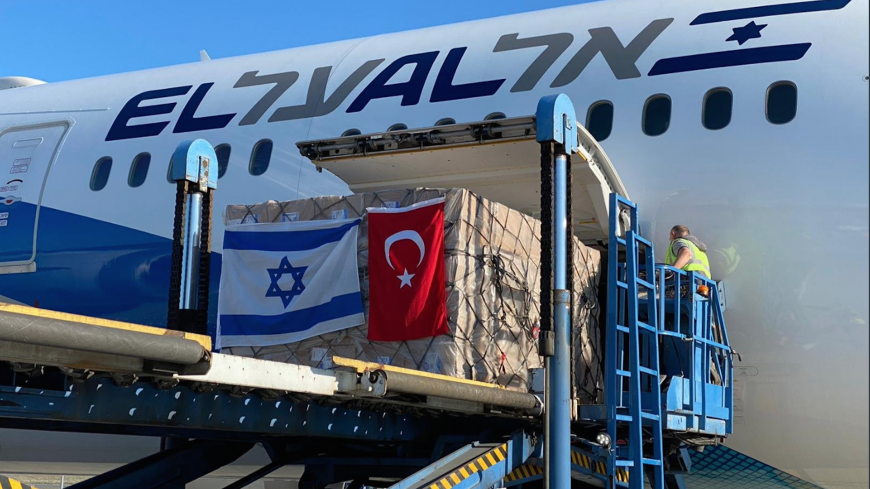 Turkish and Israeli flags are displayed outside an El Al cargo plane that arrived in Istanbul on May 24, 2020. - TWITTER

There has been a surge of optimism lately about a possible thaw in relations between Turkey and Israel. Signs of a possible breakthrough came when Israel’s national carrier, El Al, resumed its cargo flights to Turkey, with the first plane landing in Istanbul on May 24 after a decade-long pause. The flights had stopped after Israeli commandos killed nine Turkish activists on board the Mavi Marmara flotilla carrying aid to Gaza in May 2010, sending relations between the former allies into a tailspin.

Yet even as El Al was loading medical supplies to combat COVID-19 for onward delivery to US doctors, Turkish President Recep Tayyip Erdogan was blasting Israel’s plans to annex nearly half of the West Bank in an Eid al-Fitr address to American Muslims the same day.

Noting that “a new occupation and annexation project, which disregards Palestine’s sovereignty and international law,” had been set in motion by Israel, Erdogan vowed to “not allow the Palestinian lands to be offered to anyone else.”

Moreover, Jerusalem is a “red line for all Muslims, worldwide,” he said, making it clear that Ankara’s overall stance toward the Jewish state remained unchanged.

Few will have likely been more dismayed than Israel’s charge d’affaires in Ankara, Roey Gilad. In a May 21 essay for the Turkish online publication Halimiz, Gilad had called for mutually reinstating ambassadors. There has been no ambassador in either capital since May 2018, when Turkey asked Israel’s ambassador, Eitan Na’eh, to “go on leave” because of carnage in Gaza and Washington’s decision to move its embassy from Tel Aviv to Jerusalem.

Gilad said the sides did not have to “agree on everything” and do have mutal concerns. Most critically, Turkey is at odds in Syria with Israel’s biggest bugbear, Iran, and its Hezbollah proxies. So why not just push differences aside to focus on common interests and enemies, Gilad suggested.

The reality remains that neither side has any compelling reason to do so, particularly since the hawkish Benjamin Netanyahu remains at Israel’s helm.

As matters currently stand, Erdogan doesn’t believe that relations can normalize so long as Netanyahu is in charge and Netanyahu thinks the same of Erdogan. “It's business as usual,” said a well-informed Israeli source speaking not for attribution. “Unlike [the period between] 1949 and 2010, Israel is not running after Turkey. Its interests are diversified and all the more so because Erdogan’s Turkey hardly followed those interests. Relations with Israel were thrown under the bus,” the source said. The source was alluding to the halcyon days of Turco-Israeli friendship in the 1990s when Turkey’s anti-Islamist generals had the final say and Israeli jets trained in Turkish skies.

Under Erdogan, Turkey hosts top-level Hamas operatives on its soil and continues to engage in “blatant” anti-Israeli and anti-Semitic rhetoric. Under Netanyahu, Israel has all but abandoned a two-state solution to the Palestinian problem.

“Is there a political will in Israel to gamble [on better relations with Turkey ] again? What for? What will Israel and Turkey get that they already don’t have?” the source asked.

The idea that Erdogan would jettison his status as the champion of the Palestinian cause — a valued domestic propaganda tool — just as Israel mulls further annexation of Palestinian territory was fanciful to start with. The only obvious downside for Ankara not having an ambassador in Israel is that “this will require it to come up with a more creative or harsher than needed reaction to the annexation as it doesn’t have the more soft diplomatic option of withdrawing its ambassador,” wrote Gallia Lindenstrauss, a senior research fellow at the Israeli Institute for National Security Studies, in emailed comments to Al-Monitor.

Meanwhile, business between the two countries, mainly in Turkey’s favor, keeps growing anyway. The resumption of the El Al cargo service is a reflection of that trend. And despite friction over Hamas, intelligence cooperation between the sides is continuing, Israeli sources confirm.

Turkish spy chief Hakan Fidan and his Israeli counterpart Yossi Cohen have met at least twice within the last 10 months, most recently in January, according to two well-placed sources speaking on condition of strict anonymity. If true, that would not be unusual. Even Gulf nations that have no diplomatic ties with the Jewish state share intelligence with it against common foes.

One of the sources said the January meeting took place in Washington and an earlier meeting in Berlin. The same source said Syria, Libya and the eastern Mediterranean were the focus of the talks.

Turkey’s troubles in the eastern Mediterranean — where it is locking horns with Greece, Cyprus and Egypt over drilling rights — inspired some of the talk about detente with Israel. Israel’s absence from a statement signed two weeks ago by Greece, Cyprus and Egypt that condemned Turkey for its “illegal activities” of gas drilling and “expansionism” in the eastern Mediterranean was seen as a sign that relations are on the mend (Israel has signed a gas pipeline agreement with Greece and Cyprus). This in turn prompted claims that Turkey and Israel were in secret talks for a maritime delimitation deal. These were promptly debunked by the Israeli Embassy in Ankara.

Either way, “The decline in energy prices makes the future development and export of the natural gas from the area highly questionable,” said Lindenstrauss. “If this has not already changed the calculus of all the actors, then it will in the near future,” she said. The dramatic fall in global energy prices make it less likely that Turkey and Israel will revive negotiations for a gas pipeline to export Israeli gas to Europe.

As for Libya, “Israel already has enough problems — being sucked into other conflicts the actors have with Turkey is not that attractive,” Lindenstrauss added.

In Syria, however, Turkey and Israel’s interests align somewhat more. Israel has, since Iranian intervention in the Syrian conflict, been striking Iranian military assets across the country. Gilad said the confluence of interests was evident when Turkey struck Iran-backed forces in Idlib after losing around 50 of its own men in a Syrian regime attack. “The fact that Turkey is clashing with Iranian and Hezbollah-backed groups in and around Idlib and that it has influence over Hamas makes it a useful partner for Israel. Therefore, the idea that Israel may be seeking a new opening with Turkey as the Shia axis grows stronger cannot be entirely dismissed,” said Ceng Sagnic, a Washington-based analyst.

Hamidreza Azizi, a visiting fellow at the Berlin-based SWP think tank, agrees that tensions between Ankara and Tehran in Syria are rising but that the potential for Turkish-Israeli cooperation there is exaggerated.

“It was clear since the beginning that Turkey’s desire to establish a zone of influence northern parts of Syria is in contradiction with Iran’s desire to bring all of Syrian territory under [Syrian President Bashar al-] Assad’s control. It was this exact contradiction that resulted in a direct faceoff between Turkey and Iran-backed groups in Idlib,” Azizi told Al-Monitor in emailed comments.

Azizi continued, “However, I don’t think this is something that could help Israel and the United States achieve their goal of rooting out Iran’s influence in Syria. Iran has already established its positions in the south, and especially in the southeast in Deir ez-Zor and Turkey appears to have neither the potential nor the willingness to go that far against Iranian-backed groups.”