Is Turkey on moderation path in its foreign policy?

Conciliatory messages coming out of Ankara recently may appear as an effort to moderate Turkish foreign policy vis-a-vis the United States, Europe and Israel, but they are likely to be just maneuvering to weather the many stalemates in Turkey's foreign ties. 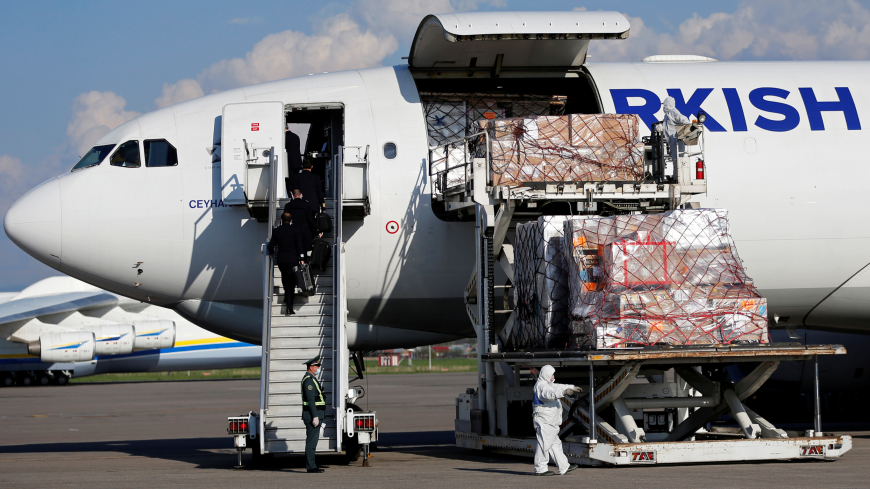 Workers wearing protective gear unload a shipment of medical supplies from Turkey intended to combat the spread of the coronavirus disease from a cargo plane at Almaty International Airport, Kazakhstan, April 18, 2020 - REUTERS/Pavel Mikheyev

The old adage that one cannot pursue an active foreign policy without a robust economy is proving true once again in the case of Turkey’s ruling party. With Turkish troops now on the front lines in Syria and Libya, the party’s claim at a bold foreign policy has been realized, but Ankara lacks the wherewithal to sustain its high-cost ambitions, as evidenced by its desperate quest for currency swaps with various countries, which has been going on for weeks.

While the COVID-19 pandemic has badly aggravated its economic woes, Ankara feels pressed to open new chapters with estranged partners, trying to turn this extraordinary global turmoil into an opportunity. Atop gestures to the United States, Ankara has asserted commitment to its ties with the European Union and messaging with Israel has warmed amid rising stakes in the energy rivalry in the eastern Mediterranean.

Not all of those steps have underlying economic rationales. Since the botched coup attempt in 2016, President Recep Tayyip Erdogan has been increasingly surrounded by Euroasianists who support Ankara’s drift away from the West and are said to be influential in the military. Erdogan appears fearful now that this could trigger a fresh coup scenario that would bring his own end; hence, another reason to seek a reset with Washington.

The COVID-19 pandemic came as a godsend in this respect, providing the pretext for Turkey to postpone the activation of the Russian S-400 air defense systems, which was scheduled for April. The postponement makes it much easier for President Donald Trump to maintain his lenient attitude toward Erdogan in the face of congressional pressure for sanctions. And as a gesture of solidarity against the pandemic, Ankara sent medical gear to Washington in late April. In an accompanying letter to Trump, Erdogan said regional developments, especially in Syria and Libya, “have shown how important it is to maintain the Turkey-US alliance and cooperation in the strongest way.”

Furthermore, former Turkish Defense Minister Fikri Isik told a panel in Washington on May 13 that Turkey’s ties with Russia “are not strategic but tactical” — a statement that was certainly not detached from the current air in Ankara. Previously, government officials did describe ties with Russia as a “strategic partnership.”

Turkey’s messages are not without reciprocations. Washington’s Syria envoy James Jeffrey said last week that, despite outstanding problems, the United States gets “along fairly well with Turkey on most of the issues from Libya to NATO to the [Caucasus], Black Sea area and including Syria and Iraq.” NATO Secretary-General NATO Jens Stoltenberg, for his part, spoke of helping the Government of National Accord, Turkey’s ally in war-torn Libya.

On the European front, Erdogan says the COVID-19 crisis should serve as an opportunity to revitalize relations, though he was threatening the EU with a new wave of refugees in the early days of the pandemic. In a message on May 9, Europe Day, he said, “I hope that the EU, which has so far displayed a discriminatory and exclusionary stance toward Turkey on various issues, has understood that we are all on the same boat. … We are determined to reach full membership to the EU.”

Meanwhile, warm breezes have blown between Turkey and Israel. A message from Israel’s official Twitter handle, which is managed by the Foreign Ministry, caused quite a stir May 7. In response to a Twitter user asking whether Turkey and Israel could be friends again, it said, “We are proud of our diplomatic relations with Turkey. We hope our ties grow even stronger in the future. Sending love to all of our Turkish followers!”

Also, Israel was absent from the signatories of a joint statement May 11 slamming Turkey’s actions in the eastern Mediterranean, which many thought to be a telling sign. The group included Egypt, Cyprus, Greece, France and the United Arab Emirates.

Ankara would like to draw Israel to its side in the energy rivalry in the eastern Mediterranean to reinforce the balance it has managed to set by signing a maritime demarcation accord with Libya’s Government of National Accord. Proponents of a similar deal with Israel believe that energy cooperation with Israel is possible despite outstanding problems in bilateral ties. A Turkish argument goes that Israel’s maritime zone would have been 6,000 square kilometers (2,316 square miles) larger had it signed a deal with Turkey and not Cyprus.

Israel has pursued cooperation with littoral states, but appears to be steering clear from further polarization involving non-regional players such as France and the UAE. In the complex outlook of Turkish-Israeli ties, the Palestinian issue remains an area of confrontation, while bilateral trade continues and the two sides remain open to negotiation in the energy field. Though Israel has been keen to use Turkey as a route for gas exports to Europe, it is unlikely to join a camp involving turbulent Libya and alienate its current partners in the energy field.

Turkey has failed to win over partners other than Libya’s Government of National Accord, which is embroiled in a civil war and needs Turkey’s military support.

On May 13, the Israeli Embassy in Ankara denied reports that Israel was intending to sign a deal with Turkey on delimiting maritime zones, which are crucial for exploration and development rights. And Alon Liel, a veteran Israeli diplomat, told the Turkish media that such a deal was unlikely because Turkey’s partner Libya sees Israel as an enemy, while Greece and Cyprus are political allies of Israel. According to Liel, the ongoing chill between Ankara and Cairo also stands in the way of Turkish-Israeli normalization because Israel cooperates with Egypt in the energy field.

Nevertheless, Israel remains open to negotiations on a gas pipeline via Turkey. According to Israeli media reports, Turkish and Israeli officials exchanged messages in December expressing readiness to resume talks on a pipeline to carry Israeli gas to Europe via Turkey.

In an article published May 21 on a Turkish website, Roey Gilad, charge d’affaires of the Israeli Embassy in Ankara, highlighting common interests, argued in favor of normalizing ties. The recent escalation in Syria’s Idlib has exposed how Iran’s presence in Syria works against Turkey’s interest, Gilad wrote, stressing that Iranian militia played a dominant part in the battles in which Turkey lost dozens of soldiers.

Turkey’s opposition has also called for normalizing ties with Egypt and Israel to extricate Turkey from its predicaments in the eastern Mediterranean. Some factors, however, are dampening such prospects.

Israeli Prime Minister Benjamin Netanyahu — at the helm of a newly formed coalition government —- is bent on a plan to annex 30% of the West Bank, which he wants to present to the Cabinet while Trump remains in office. Such a move is bound to generate harsh reactions from Ankara, meaning that bilateral ties are headed for another critical test this summer. And Gabi Ashkenazi, Israel’s former chief of general staff whom Turkish prosecutors had indicted over the Mavi Marmara incident in 2010, is now Israel’s foreign minister.

All in all, Turkey could gain some room to maneuver by winning over this or that country against another, but such a strategy is unlikely to produce lasting results as long as its ties remain on a polarization track.

In ties with Washington, Ankara aims to cool an array of rows, including on the S-400s, the Syrian Kurds and Halkbank’s embroilment in an Iranian sanctions-evasion scheme, but what happens if Trump loses in November is a big question mark.

On the EU front, hopes for moderation are marred by tensions with France, which Ankara calls “the patron of the axis of malice” against Turkey.

An authoritarian tilt since 2013 has driven Turkey further away from EU norms after its membership talks stalled in 2007. In his appeal to revitalize ties, Erdogan portrayed Turkey as a powerful country, from which even EU nations have sought help during the COVID-19 pandemic, saying nothing about democracy and reforms. Such rhetoric speaks not of an intention to return to efforts to align with EU norms but rather a hope that the EU accepts Turkey with its current democracy record.

So, is Ankara really aiming at a reset or is it just hoping to regain wiggle room for its adventurist foreign policies? The latter option looks likelier.