Why is France a useful adversary for Turkey?

Although France has the means to hamper Turkey, both in the European Union and Africa, its current strategy often plays into Turkey’s hands, as evidenced by its recent failure to squeeze Turkey through a NATO probe. 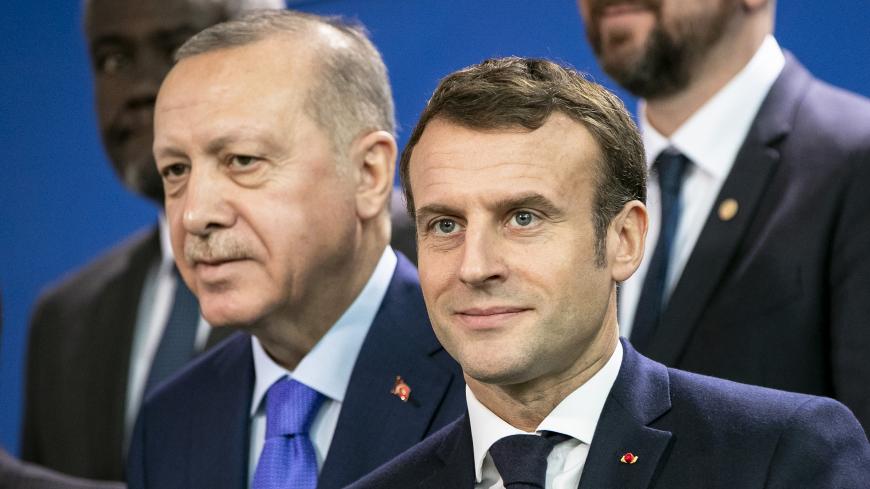 The first round in the Turkish-French confrontation over Libya, coming atop the energy row in the eastern Mediterranean, resulted in Ankara’s favor. In early July, a furious France pulled out from a NATO security mission in the Mediterranean after a NATO investigation did not back its allegations that two Turkish frigates harassed a French warship as it sought to inspect a vessel suspected of carrying weapons to Libya last month.

As Turkish President Recep Tayyip Erdogan savored the outcome of the investigation, many in Ankara were quick to conclude that French power was in decline. Turkey's state-run Anatolia news agency has said that France lacks coherent strategies and tools to exert influence in the region, struggles to get support from other European heavyweights, is still haunted by its army’s “debacle” in World War II and “cannot stomach” Turkey’s military capabilities. The argument goes that France is trying to pit Turkey against Russia, while also hoping for a Turkish-Egyptian war in Libya.

A main point of strength for Turkey in Libya is that it backs the UN-recognized government in Tripoli. France, for its part, accuses Turkey of using Islamist militants, drawing mostly on the notion of fighting terrorism. But due to diverging priorities, France has failed to impress its Western partners, many of whom have not even made an issue of Turkey’s transfer of Syrian jihadis to Libya.

France’s essential misfortune in Libya stems from falling on the same side with Russia. It has ended up largely isolated in NATO as Washington came to prioritize the prevention of Russian entrenchment in Libya after initially winking at Khalifa Hifter, the leader of the eastern forces, and sympathizing with Egypt’s concerns over the Muslim Brotherhood. Russia entered the game after France had already put its bets on Hifter. Ostensibly, everyone was investing in a “secular” alternative that would defeat the Islamists. France could have hardly foreseen that Turkey would intervene directly on the side of the Tripoli government, linking the conflict to the energy rivalry in the eastern Mediterranean, and that Washington would come to back Ankara.

Paradoxically, Erdogan is able to posture as a defender of NATO against French President Emmanuel Macron, who argues the alliance is “brain dead,” never mind that Turkey has bought Russian air defense systems and blocked implementation of a NATO defense plan for eastern Europe in an attempt to force its allies to blacklist the Syrian Kurdish People’s Protection Units (YPG) as a terrorist group.

Second, Erdogan has used the French colonial past in Africa in a full-blast effort to promote Ankara’s own efforts to open up to the continent. He has had no qualms about raking over the coals of colonialism during trips to Algeria, Tunisia, Morocco, Senegal, Gabon and Niger in recent years.

Also, Erdogan has skillfully portrayed France as a “destructive” actor in Libya, referencing the French lead in the 2011 NATO intervention in Libya, never mind that the Turkish city of Izmir was the headquarters of the campaign.

Furthermore, Erdogan accuses France of “supporting terrorism” over its backing for the Syrian Kurds. Washington’s partnership with the YPG has been at a much greater level, but Ankara’s criticism of Washington has had a reverse gear.

Still, the Turkish tendency to downplay France’s clout is mistaken. After its failure to squeeze Turkey at NATO, France unfolded its European Union cards, calling a July 13 meeting to discuss Ankara’s actions in Libya and the eastern Mediterranean and consider sanctions.

The EU’s own divergences, however, keep the bloc from applying strong pressure on Turkey. The economic fallout of the COVID-19 pandemic also stands in the way of assertive foreign policies. Plus, many EU members are not at ease with France falling on the same side with Russia in Libya.

Domestic politics are another factor weakening France’s profile on the foreign policy track. Macron reshuffled the government this week after his party took a drubbing in local elections in late June, atop the blows of the coronavirus pandemic, the “yellow vests” riots and trade union protests.

German Chancellor Angela Merkel, whose country took over the EU presidency this month, has other priorities such as the trade dossiers with China and the United States, overcoming the pandemic damage, appeasing disenchanted members such as Italy and Spain and weathering Brexit smoothly. She might consider a second Berlin conference on Libya, but seeks to avoid losing her real focus to the French-Turkish score-settling.

Yet such downsides for France do not mean that things will be easy for Turkey. Erdogan’s Libyan venture is the most staggering episode in his dreams of a return to Africa. In this context, France’s aversion to a Turkish comeback is rather different from its rivalries with China, India and the United States, to which France has been losing the African market. Erdogan’s Africa opening, fraught as it is with anti-colonial narratives, is seen as a score-settling attempt by the French; hence they are unlikely to stand by with folded arms.

Indeed, Paris has the means to hamper Turkey in Africa, where France holds permanent military bases in Djibouti, Ivory Coast, Gabon and Senegal and has run counterterror operations in Mali, Mauritania, Niger, Burkina Faso and Chad since 2014. France has close ties with Tunisia and Algeria, two important neighbors of Libya. During a June visit to Paris, Tunisia’s president pleased his hosts, saying the Turkish-backed Government of National Accord in Libya had only “a temporary legitimacy” and should be replaced with “a new legitimate government.”

To impede Turkey, France is likely to spearhead moves within the EU as well. France, Greece, Cyprus and Austria have already proved their skill in teaming up to hamper Turkey. The EU has thus far excluded Turkey from its travel reopening, dealing Ankara a major blow as it grapples with a hard-currency crunch and hopes for the return of European tourists to boost its revenues. Ankara sees its exclusion as a political move, arguing that its pandemic record is better than many in Europe. Turkish Foreign Minister Mevlut Cavusoglu traveled to Berlin last week to seek a breakthrough on tourism, but to no avail.

The EU’s refugee deal with Turkey remains important for Merkel, but the general European sentiment toward Turkey keeps deteriorating. Volkswagen’s decision to drop a major investment plan in Turkey despite lavish government incentives is not an ordinary event. It shows that even Merkel could do little for Turkey as she tries to prevent the EU from drifting into a big schism over Turkey. On July 6, German politicians attending an online meeting organized by Erdogan’s party signaled that Ankara could hardly hope for a new page with the EU because of its worsening record on democracy and the rule of law.

Back to Libya, a core point of contention between France and Turkey is about which country is violating the UN arms embargo. According to French sources, French assistance for Hifter has been limited to a few missile batteries and intelligence agents, sent prior to 2017, unlike the extensive military, technical and militia support that Ankara has provided to the Tripoli forces. As the researcher Jalel Harchaoui puts it, Paris shares the Egyptian and Emirati intolerance for political Islam, and even if it did not get involved in the conflict as much as the Russians, it provided a “diplomatic veneer” to Hifter.

As Turkish and Russian involvement grew, the scenario of Libya becoming an influence-sharing ground for Turkey and Russia has emerged as an unsettling prospect for France, which it describes as “the Syrianization of Libya.”

France is now compelled to look for alternatives. Because sidelining Turkey and Russia simultaneously is impossible, the French have timidly moved to communicate with the head of the Government of National Accord, while trying to convince the EU and the United States to readjust their postures.

In any case, Libya is not a place where either of the sides could bring peace by ignoring the other. The country has a coastline of 1,800 kilometers (1,120 miles) on the Mediterranean, land borders of 4,000 kilometers (2,485 miles) with six neighbors and oil and gas partnerships with international companies. Turkey’s intervention to secure Tripoli, Egypt’s declaration of Sirte as a “red line” in collaboration with Russia and France and the rifts in NATO and the EU are all pointing to one way out — a negotiating table where the Libyans decide Libya’s future.