Is France irked by Erdogan’s passion for Africa?

Erdogan’s efforts to boost Turkey’s economic role in Africa have been marked by outbursts maligning France’s colonial past, but there is more to Turkey’s Africa opening that fuels the bilateral spats. 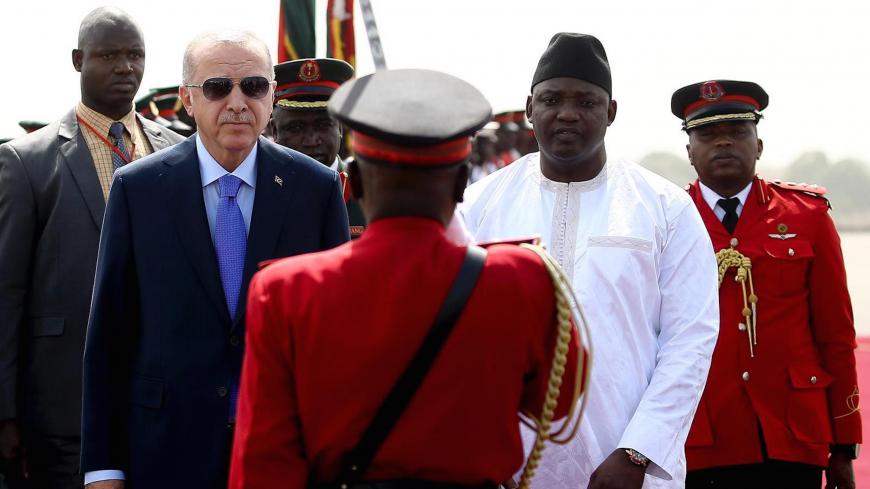 Turkish President Recep Tayyip Erdogan boasts about being the leader who goes most frequently to Africa, but his outreach to African countries might backfire as he keeps maligning Europe’s colonial past and pursues a controversial strategy in Libya.

On Jan. 27, Gambia became the 28th African country Erdogan has visited. Erdogan's trip to war-torn Somalia in 2011 was the most publicized as he became the first non-African leader to visit Mogadishu in two decades. His most controversial visit, however, was to Sudan in late 2017. Sudanese leader Omar al-Bashir, who would soon be overthrown, agreed to lease Suakin Island to Turkey, animating Erdogan’s Ottoman dreams. Claims that Turkey would build a military base on the island, once an Ottoman port, after restoring its historical sites infuriated other Red Sea countries who saw the move as “the return of colonialists.”

Turkey’s outreach to Africa, which began in 1998 and intensified after Erdogan’s Justice and Development Party came to power in 2002, was initially free of controversy, focusing on trade, investments and humanitarian aid. But once Turkey began to add the military dimension in, it caused eyebrows to raise. The military base Turkey opened in Somalia in 2017 to train local soldiers and the ensuing Suakin controversy aside, Turkey’s intervention in Libya’s civil war could prove to be an engagement that alters Ankara's narrative on opening to Africa.

Since 2005, which was an “Africa year” for Ankara, Erdogan has argued that the Ottomans left a proud legacy on the continent and that Turkey was never a colonial power eyeing Africa’s resources, while pointing to the West’s colonialist past and maligning particularly the record of France.

With Turkey already at odds with France over its close ties with Syrian Kurdish leaders, the Libyan issue has grown into a flat-out faceoff between the two sides. Ankara backs the Islamist-controlled Government of National Accord in Tripoli, while Paris bets on Khalifa Hifter, the commander of the Libyan National Army. The rift grew wider at last month’s Libya conference in Berlin, where French President Emmanuel Macron brought up Turkey’s transfer of jihadis from Syria to Libya. Macron followed up with accusations that Erdogan was breaking promises made in Berlin by sending ships carrying mercenaries to Libya. He slammed Turkey's actions as “an attack on the sovereignty of Libya” and “an attack on the security of all Europeans and inhabitants of the Sahel.”

Erdogan showed he would not refrain from escalating the row with France during his African tour Jan. 26-28, which took him also to Algeria and Senegal. Speaking to journalists accompanying him on the trip, Erdogan said Algerian President Abdelmadjid Tebboune told him the French had massacred more than 5 million Algerians over 130 years. “I told him, ‘I’d be very glad if you could send me documents about that’. … I didn’t imagine the number was that big,” he said. In fact, Erdogan had already mentioned that number. Responding to French criticism of Turkey’s military campaign in Syria in April 2018, he charged, “Didn’t you massacre 5 million people in Algeria? Answer for that first!”

If passionate comments in the Turkish media are to be trusted, France is in a panic for losing Africa to Turkey. According to the outlook they depict, indignation is growing over France’s military presence in Africa, with France suffering setbacks in trade and investments. The comments also highlight that the CFA franc system in former French colonies, which requires them to hold at least half of their foreign-exchange reserves in the French treasury, is coming to an end. And with Turkey’s active Africa opening supposedly coming out on top, France is going into anger fits.

True, France has lost economic ground to China and India, which have stormed into Africa in recent years, as well as to Spain, which stands out among Western powers trying to counter the Chinese and Indian thrusts, and even to Britain, another former colonial power. In 2017, the French share of exports to the African market fell to 5.5% from 11% in 2000, while that of China increased to 18% from 3% in the same period.

Still, one could hardly argue that a French decline is underway in Africa due to Turkish strides.

France’s exports to Africa were worth $28 billion in 2018. Among European nations, Germany was the second biggest exporter to Africa with $25.4 billion, followed by Spain with $21 billion and Italy with $19.9 billion. French imports from Africa, meanwhile, amounted to $27.5 billion. In sum, France’s trade volume with the continent totaled $55.5 billion.

During his Africa tour, Erdogan said Turkey’s trade volume with Africa had reached $26 billion, increasing 381% over the past 17 years, with Turkish exports accounting for $16 billion. The target is to reach $50 billion in mutual trade, he said, reiterating the figure he had mentioned in Gabon in 2015.

However, the Turkish Statistical Institute measures trade differently than Erdogan. The institute said Turkey’s trade with African countries was nearly $21.5 billion in 2019, with $15.8 billion in exports and $5.6 in imports. The figure stood at $21.4 billion in 2018, with Turkey’s exports and imports standing at $14.4 billion and $7 billion respectively.

In terms of Turkish investments in Africa, the numbers are rather modest — and it is investments that often determine the depth of relations.

“Turkey’s net investment stock in [the continent] has reached $2 billion. The market value of those investments has exceeded $6 billion,” Erdogan said Jan. 26. Earlier, the coordinator of Turkish-African business councils, Tamer Taskin, had put direct Turkish investments at $6.2 billion in 2017, up from $100 million in 2003.

France’s direct investments, meanwhile, stood at $34 billion in the 2014-2018 period, while China was the biggest investor with $72 billion. Trailing behind were the United States with $31 billion, the United Arab Emirates with $25 billion and Britain with $17 billion.

Erdogan eyes the Turkish defense industry as an important realm to boost exports, in addition to the construction sector. During his Africa tour, he kept up efforts to market Turkish-made drones, warships, helicopters, tanks, armored vehicles missiles, rifles, howitzers and training aircraft.

Turkey’s efforts vis-a-vis Africa extend beyond trade. The number of Turkish embassies in the continent has reached 42, up from 12 in 2002, while the number of African embassies in Ankara has increased to 36 from 10. In the past five years, 15 new bilateral business councils have been set up, bringing the total number to 45. The Turkish Cooperation and Coordination Agency, a government body involved in development work, has opened 22 offices across the continent. Turkish Airlines flies to 58 destinations in 38 African countries. Some 4,500 African students have received scholarships to study in Turkey.

Yet Ankara’s political posture appears to be increasingly marring this momentum. First and foremost, Turkey has viewed Islamist channels as the most easily accessible means of influence. Entities affiliated with Islamist communities have been the main pillar of Ankara’s soft-power strategy for years. In Sudan, for instance, the fellowship with the Bashir regime relied on Islamist affinities; once Bashir was toppled, the relationship networks stumbled, lacking strong institutional foundations.

This counterproductive strategy is now being repeated in Libya, where Ankara has thrown its weight behind the Islamist forces. The transfer of jihadis from Syria has taken things to a whole new level. Turkey’s policy is rekindling sensitivities stemming from the Islamist insurgencies that North Africa and the Sahel region have suffered for years. And this is the biggest trump card that France could be given.

With permanent military bases in Djibouti, Gabon, Ivory Coast and Senegal, France retains its intervention ability in “French Africa” as part of what it describes as fighting terrorism. The French military activity, which began with Operation Serval in Mali in January 2013, has expanded to Burkina Faso, Chad, Mauritania and Niger since Operation Barkhane kicked off in August 2014. No wonder the French are now calling out Turkey’s jihadi-nourishing policy.

At first glance, drawing on Africa’s dilemmas stemming from its colonial history may look like a smart tactic to open room for Turkey in its outreach to the continent. Yet keeping the emphasis on Europe’s colonialist past could ultimately turn into a trap and snag Turkey’s efforts. After all, not everyone remembers the Ottoman legacy as being as immaculate as Erdogan does.

Back in 2011, amid a row over a French bill that would make it a crime to deny that Armenians suffered genocide under the Ottoman Empire, Erdogan lashed out at then-President Nicolas Sarkozy, saying, “What the French did in Algeria was a genocide. If Sarkozy is not aware of this genocide, he can go and ask his father Pal Sarkozy, who served in the French legion [in Algeria] in the 1940s.” Erdogan’s outburst provoked a rebuke from Algeria’s then-premier, who said, “Nobody has the right to make the blood of Algerians their business” and urged Ankara to “stop making capital out of Algeria’s colonization.”

Erdogan’s latest reference to Algeria drew a similar response. An Algerian Foreign Ministry statement said Algeria was “astonished” by Erdogan’s remarks. The words attributed to Tebboune were “lifted out of their context,” it said, stressing that Erdogan’s statements “do not serve the efforts deployed by Algeria and France to resolve the questions related to past legacies.”

Asharq al-Awsat, meanwhile, quoted an Algerian activist as saying that Algeria could ask European countries for archives on “the Ottoman plunders here,” which he described as “crimes no lighter than France’s colonial crimes.”

Ankara’s rhetoric of reviving its Ottoman legacy has been stirring similar sentiments. Its effort to add military dimensions to ties is only increasing the aversion.