Libya is only small part of Turkey’s ambitious Africa overture

Although Turkey’s moves in Libya capture a lot of headlines these days, Ankara has been busy on other fronts in Africa. 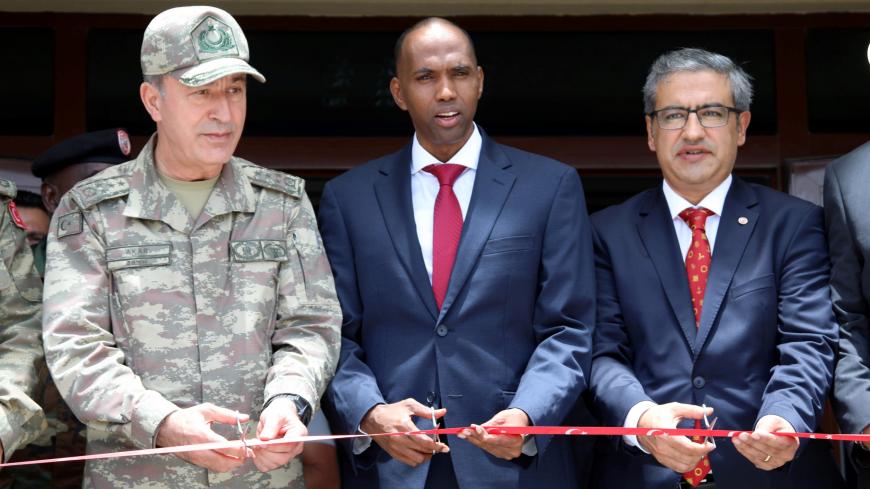 While Libya captures a lot of headlines today, it is hardly the only African country where Turkey is keeping busy these days. While Turkey’s recent attempt (with Russian support) to negotiate a cease-fire in Libya has failed to halt that country’s violent civil war, Ankara’s moves in other parts of Africa suggest that Turkey will remain tenacious in pursuing its interests in Libya and in the rest of the continent.

When the Turkish Foreign Ministry prepared a document titled “Africa Action Plan” in 1998, not many noticed. But as Turkey’s economic profile grew under President Recep Tayyip Erdogan and his Justice and Development Party (AKP), Ankara’s overtures in African countries increased. Efforts ranging from state building to providing security assistance to taking over schools affiliated with the network of Pennsylvania-based preacher Fethullah Gulen, who is accused of masterminding the 2016 coup attempt, have ramped up. Meanwhile, despite challenges, commerce remains the most successful element of Turkey’s African overture.

In the Horn of Africa, Turkey has become something of a big brother to Somalia. Struck by political divisions and factional strife since 1991, Somalia also experienced a massive drought and famine in 2011 that killed more than 260,000 people. Erdogan, then prime minister, visited the Somali capital, Mogadishu, and initiated a high-profile reconstruction mission. When Somalia began struggling with another drought in 2017, a Somalian expert called for other countries to follow Turkey’s example by praising “the Turkish model [that] combined aid and development” in 2011-12.

Currently, Turkey maintains one of its largest overseas bases in Mogadishu, where it continues to train a quarter of the national army. Turkish Airlines flies to the Somali capital on a regular basis. The Turkish foreign aid agency and private companies are active in the territories controlled by Somalia’s central government.

Meanwhile, off the coast of the Horn, Turkish warships patrol the Gulf of Aden as part of the UN’s anti-piracy task forces. In nearby Sudan, Erdogan’s government leased the port city of Suakin on the Red Sea in 2017. Yet the status of that lease is a mystery since the ouster of Sudanese President Omar al-Bashir.

While Turkey’s military and political moves in Africa capture the headlines, commerce is the king. Turkey’s total trade volume with Africa reached $20 billion in 2018, though that figure is a small portion of overall Turkish foreign trade (nearly $400 billion in 2018).

Ankara is picking up the pace. Since the mid-2000s, Turkey has concluded free trade agreements with four African countries. In fact, Turkey’s trade with Africa proves the maxim that money does not care about creed, politics or skin color.

For example, even as Turkish-Egyptian diplomatic relations stumble from one crisis to another, Egypt remains Turkey’s largest trading partner in Africa thanks to their free trade agreement. In 2018, Turkey exported more than $3 billion goods and services to Egypt in 2018 while Egyptian exports to Turkey reached $2.2 billion. New free trade agreements with Sudan and Ghana are awaiting ratification. Ankara also is negotiating free trade agreements with other African governments in a bid to secure unrestricted access to the newly created African Continental Free Trade Area.

The free trade agreement with Morocco offers a cautionary tale of success. Originally meant to take advantage of the northwestern African nation’s free trade agreements with the United States and the European Union and its potential as a logistics hub, the Turkish-Moroccan free trade agreement turned into a blessing for Ankara on its own merit. Trade between the two countries, which stood at $435 million in 2004, reached $2.6 billion in 2017 — with a surplus of $1.27 billion to Turkey’s advantage. This trade imbalance and the Turkish customs authorities’ alleged discrimination against Moroccan imports have upset Morocco’s business community. Earlier this month, the Moroccan government added new tariffs on imported Turkish textiles while the Moroccan trade minister threatened to cancel the free trade agreement.

In response, Turkey’s Trade Minister Ruhsar Pekcan traveled to Morocco on Jan. 15 and called on Turkish businessmen to invest in joint projects with their Moroccan counterparts to access third-party markets in Africa — subtly acknowledging Rabat’s concerns. Pekcan also said Ankara will be “knocking on Africa’s door much more” this year.

Despite the problems, Turkey’s business community is happy with the AKP government’s Africa focus. A senior foreign trade expert in Istanbul agrees that Africa is the wave of the future for Turkey’s economic growth.

“We opened a dozen new embassies in Africa. Turkish Airlines has opened offices in virtually every African capital and it flies to all major African cities. This made a big difference in our trade with the continent,” he told Al-Monitor on condition of anonymity.

The expert also claimed that while Ankara has been putting pressure on many countries around the world to turn over Gulenist schools to bodies affiliated with the Turkish government, on the economic front, Gulenist businessmen are slowly being brought back into the fold.

Allegedly, pro-AKP business circles are cautiously reestablishing partnerships with Gulen-affiliated businesses in Africa. “Money has no ideology,” the expert said.

The expert also spoke positively of the increasing number of African immigrants in Istanbul, whom he described as “qualified labor — many of those who arrive are college educated, and often speak both French and English fluently.”

Turkey’s recent changes to its immigration and naturalization laws are slated to bring more immigrants from Africa, he added. Currently, foreign nationals could gain Turkish citizenship upon buying properties worth $250,000 or gain permanent residency upon buying a home of lesser value.

But the same expert lamented significant hurdles — in particular, double taxation and high tariffs — undermining Turkish trade with Africa. Lack of effective financial connections between Turkey and many African countries seem to be another source of grievance. “Turkish banks will not recognize letters of credit from African banks and vice versa. … Of course, merchants find a way around that problem, so official numbers on Turkey’s trade with Africa may be underreported,” he said. The expert noted how these problems lead Turkey to fall behind China in Africa. “Unlike the Chinese, who sell their goods by the container ship, we can sell our things only piecemeal.”

The good news is that Turkey seems to be following in China’s footsteps. Like China, Turkey does not carry the legacy of a troublesome colonial past in much of Africa. Beijing, despite its controversial economic and commercial policies in many countries, has signed more than 40 bilateral free trade agreements with African governments since 2000. Even before the advent of the African Continental Free Trade Area, the Central Kingdom pushed to join the Southern Africa Customs. (Ankara, for its part, has set its sights on South Africa as its next partner for a free trade agreement.)

And perhaps that is the most important lesson for Turkey: To keep pushing. In 2000, Chinese trade with Africa was a mere $10 billion — an afterthought in a space where former European colonists took the lead. Fast forward 20 years, China-Africa trade is slated to reach $220 billion. But even if the gargantuan Chinese competition and legal and financial obstacles were to be negotiated, mindsets need to be changed.