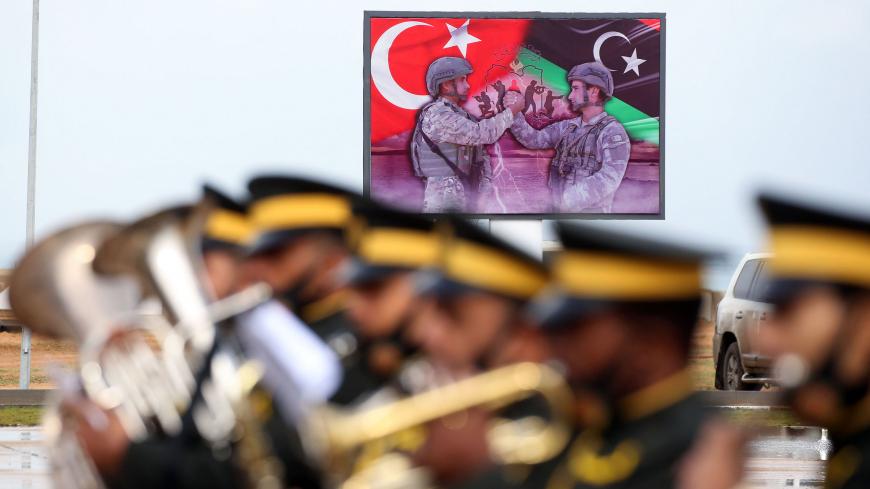 A military band performs during a graduation ceremony for cadets loyal to Libya's UN-recognized Government of National Accord in a military-training agreement with Turkey at the Omar Mukhtar camp in the city of Tajoura, southeast of the capital Tripoli on Nov. 21, 2020. - MAHMUD TURKIA/AFP via Getty Images

Turkey’s regional ventures, spurred by Ottoman nostalgia, have earned it a hostile Arab front led by Saudi Arabia, the United Arab Emirates and Egypt. Though Turkey’s ambitions have hardly translated into a success story, they have fueled a plethora of myths and falsehoods that both Turks and Arabs are feeding off.

In his comments on regional issues, President Recep Tayyip Erdogan often brings up the treaties that led to the disintegration of the Ottoman Empire or evoke the Ottoman legacy by, say, pledging Turkish citizenship to Lebanese Turks or speaking of one million ethnic Turks in Libya. For many in the Arab world, such statements are a signal that the Turks have designs on Arab lands and are eyeing a comeback. Maps of a “Greater Turkey” circulated by figures close to Erdogan have only fueled the suspicions.

The Erdogan-controlled Turkish press has similarly fanned Arab fears by marketing Ankara’s regional moves with a heavy dose of hyperbole and nationalist bluster. Pro-government commentators theorize that the defense of Turkish borders begins in the Mediterranean, the Persian Gulf and the Indian Ocean, boasting that Turkey is building lines of defense on three continents. Many Arab journalists, too, paint an overblown picture of Turkey and its capabilities, though in an alarmist fashion. From the optics of both sides, Turkey looks like a Leviathan pervading a sprawling region — from Syria, Iraq, Lebanon, Palestine and Yemen to Libya, Somalia, Djibouti, Ethiopia, Mali and Senegal. Using the same toolbox, both sides are fanning enmity and deluding their respective publics.

Several years ago, for instance, pro-government Turkish news outlets hailed Sudan’s decision to lease its Suakin Island to Turkey as a development that “profoundly changes the balance” in the Red Sea. Although no Turkish base was there yet, they linked the island to the Turkish bases in Qatar and Somalia to celebrate a “Turkish triangle” in the Red Sea, the Persian Gulf and the Indian Ocean. The same outlets, however, have neglected to follow up on the story, namely how Turkish ambitions on Suakin went down the drain after the overthrow of Sudanese President Omar al-Bashir in 2019. Following the coup, the head of the military leadership was quick to assert that Suakin was an “inseparable part” of Sudan.

“Its value cannot be measured with a material price. Its history cannot be sold,” he said. The statement must have come as relief for the Egyptian press, which had claimed Turkey would use Suakin to topple Egyptian President Abdel Fattah al-Sisi, a nemesis of Ankara since ousting the Muslim Brotherhood in 2013.

In a fresh addition to the myths, The Arab Weekly reported Jan. 26 that Ankara’s decision to extend the mandate of anti-piracy naval forces in the Gulf of Aden, Somalian waters and the Arabian Sea was part of its “destabilizing agenda” in Yemen and the Horn of Africa. According to the paper, Turkey has sought footholds in Somalia and Djibouti in a bid to obstruct the interests of Gulf countries and control commercial traffic in the Horn of Africa by taking control of ports on the Bab al-Mandeb Strait in Somalia, Somaliland and Djibouti.

In reality, there is no evidence that Ankara is eying ports in Djibouti and Somaliland, even though Turkish companies operate the international airport and seaport in the Somali capital. Turkey has spoken only of establishing a commercial center in Djibouti, where Saudi Arabia, China, France and the United States have acquired military bases. As for breakaway Somaliland, Turkey opened a consulate there in 2014, but the UAE has been the essential regional power courting Somaliland, with Egypt apparently in tow.

The Arab Weekly also blames Turkey for undermining Saudi stabilization efforts in Yemen in order to achieve its strategic goals at the expense of continued chaos. Turkey also stands accused of expanding intelligence operations in Yemen under the cover of humanitarian aid missions and helping Muslim Brotherhood affiliates gain control of the oil-rich province of Shabwa and build a seaport there, all to advance its own interests.

Earlier reports by The Arab Weekly claimed the Houthis and the Brotherhood have colluded to seize Bab al-Mandab with Turkish backing and Turkey has supplied drones to and trained Brotherhood elements in Yemen.

All those claims appear to be overblown achievements credited to Turkey. If they were genuine, Erdogan would have hardly missed the opportunity to brag about them. The regional rivals have often tried to trip up each other and their rivalries have escalated into enmity, but Turkey's wins were not all that big.

For others like former Egyptian diplomat Ramzy Ezzeldin Ramzy, Turkey’s pursuit of military footholds in Sudan, Somalia, Qatar and Libya are part of a policy to encircle Egypt. Many believe Turkey’s ambitions in Libya are not limited to that country but extend to its neighbors and beyond.

For Asharq al-Awsat columnist Abdulrahman Al-Rashed, Turkey is a threat to no less than 15 Arab countries. “The Turks in Libya are the greatest threat to Egypt since the Camp David Accords,” he wrote. “Turkey will use Libya to blackmail the Europeans and threaten Egypt, Tunisia, Algeria and Sudan. Turkey’s next war will be in Yemen.”

Ankara’s backing of the Muslim Brotherhood keeps the tensions alive. Asharq al-Awsat’s Hanna Saleh believes Turkey is drawing on neo-Ottomanism to build “a Muslim Brotherhood crescent in parallel to the Persian crescent.” For his fellow columnist Saleh al-Qallab, Erdogan “has virtually pledged allegiance to the Muslim Brotherhood.” Based on experience, this author would counter that Erdogan’s allegiance is to his interests alone. Since the Arab Spring, the Brotherhood has indeed become a tool of political influence for Erdogan, but his pragmatism means he might well show them the door down the road.

Score-settling over the Brotherhood aside, Turkey’s efforts to expand its influence through economic, political and military ties can hardly be reduced to or explained away as animosity toward Egypt. Turkey’s close ties with Sudan under Bashir or rapprochement with Ethiopia amid the latter’s water-sharing row with Egypt could have indeed felt like encirclement in Cairo. And indeed, Egypt lacks real leverage in many regions to which Turkey has reached out. Still, Egypt has the upper hand in reaching out to Arabs in regions of clashing interests. Encircling Egypt is simply beyond Turkey’s capacity.

In a climate where any political, commercial or humanitarian contact is seen as a move of conquest by one side and invasion by the other, sparring has become inevitable. The Turkish side has come to look for a Saudi-Emirati hand behind any terrorist or piracy attack targeting Turkish interests. In June, for instance, the daily Yeni Safak, an Erdogan favorite, trumpeted, “The UAE will attack Turkey in Somalia.” According to the paper, “The UAE has set an eye on Somalia after suffering a heavy defeat in Libya. Its objective is to drag [Somalia] back into chaos after the African country reached stability with Turkey’s support. Thus, it will also take revenge from Turkey. Abu Dhabi, which had attempted a coup in Somalia in 2018, is now inciting terrorism via the autonomous Somaliland and Puntland.” The same paper has claimed that after Bashir, Sudan has been collaborating with Egypt and Israel to curb Turkish presence in the Red Sea.

The notion of neo-Ottomanism may be a source of motivation for Erdogan, but it is now a fantasy without grounds. Erdogan’s moves to expand Turkish influence in the Middle East are hardly the product of a comprehensive, well-thought-out strategy backed with corresponding means and capabilities, as Turkish and Arab media portray them. Moreover, he may be running out of ammunition on this front, for he has recently turned to reviving ties with the European Union.

Turkey has hit a dead end in Syria despite its military buildup there, is unable to guarantee the future of its military cooperation and maritime demarcation deals with Libya’s Tripoli-based government and is back to ground zero in its ties with Sudan. The significance of its base in Qatar is bound to diminish as Doha mends fences with its neighbors, while the one in Somalia is becoming an issue of polarization in Somali politics. In Yemen, Erdogan was so pro-Saudi at the outset that he advocated the intervention, but bilateral ties have since soured, with Crown Prince Mohammed bin Salman at the center of the fallout. Still, Erdogan has remained respectful to King Salman and stopped talking about Yemen, an issue on which Turkey lacks a holistic policy.

The Saudis enjoy a vast network in Africa and even have a minister in charge of ties with African countries. King Salman sponsored the Eritrea-Ethiopia peace in 2019. Saudi influence on the littoral states of the Red Sea and the Gulf of Aden is beyond question.

In its positioning in Africa, Turkey has mainly meant to counter France and has often made mistakes like backing the controversial electoral board in the upcoming elections in Somalia and rushing to visit the military junta in post-coup Mali in September.

Turkey’s ambition was to become a vibrant economic hub between continents, but it has ended up being a harbor for problem groups, exiles and fugitives. And the Turkish bases abroad are a gift of the desperation of host countries. They are bound to become contentious as the reasons for the desperation diminish. The gap between Turkey’s ambitions and capabilities is growing, as is the gap between its rhetoric and the realities on the ground. Despite all the big talk, Turkey’s trade volume with Africa remains at some $21 billion.