The rivalry between Turkey and its regional adversaries has spilled over to the Horn of Africa and other regions in the continent beyond Libya, stoked by Ankara’s militarization of its outreach policy. 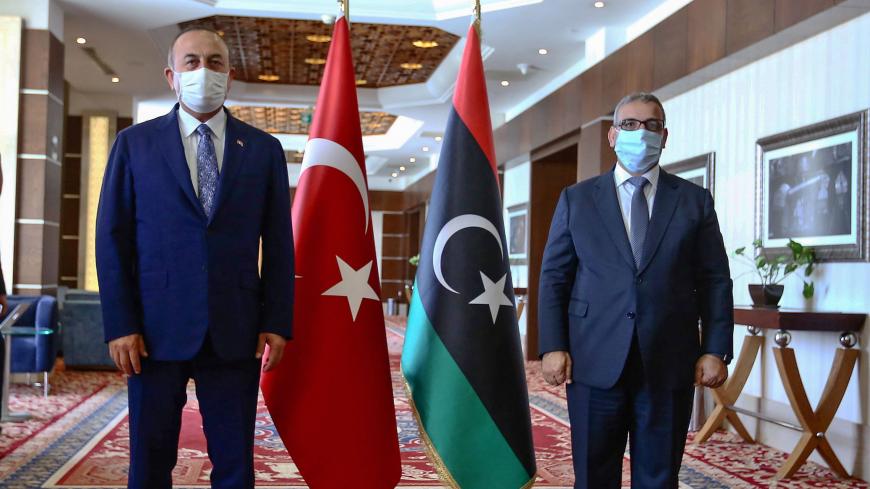 Turkish Foreign Minister Mevlut Cavusoglu (L) poses with President of the Libyan Supreme Council of State Khalid Al-Mishri prior to a meeting in Libya's capital Tripoli, on Aug. 6, 2020. - AFP via Getty Images

Turkey’s opening to Africa, which began as a diplomatic and humanitarian endeavor two decades ago, is becoming increasingly militarized, fueling the regional influence wars between Turkey and Qatar on one side and Egypt, Saudi Arabia, the United Arab Emirates and France on the other.

Dating back to an action plan adopted in 1998, Turkey’s opening to Africa gained momentum in 2005, which Ankara declared as “Year of Africa.” The outreach, marked by active diplomacy and humanitarian aid, turned into a passionate venture for President Recep Tayyip Erdogan after his regional ambitions shot up during the Arab Spring. Africa became an attractive new ground for Ankara’s pursuit of influence, met with suspicion in the Middle East as a neo-Ottoman quest. Though the Ottoman legacy may bring back unpleasant memories in North Africa, Turkey has found ground for smoother exchanges in many other corners of the continent.

Since 2002, the number of Turkish embassies in Africa has risen from 12 to 42 and its business cooperation councils from six to 46, while the African routes of the Turkish Airlines have increased from four to 60. Drawing on this expanded network, Erdogan has moved to add military dimensions to bilateral ties. In his visits to the continent, he has not only advertised Turkish military products but also sought to forge military collaborations.

In the fall of 2017, six years after Erdogan’s memorable visit to war-torn Somalia, Turkey inaugurated a $50-million military base in Mogadishu that established a new equilibrium in the Horn of Africa.

Later in the year, Sudan agreed to lease its Suakin Island to Turkey for 99 years, sparking anxiety of an “Ottoman return” to the Red Sea among rival countries. The deal involved the restoration of historical monuments on the island, once an Ottoman post, but Turkey’s plans also included the construction of a port for civilian and military purposes. Egypt responded in kind, wary that Sudan, emboldened by Turkish support, would grow more assertive in the disputed Halayeb triangle on the Red Sea coast. In addition to building the Mohamed Naguib military base near the Libyan border that facilitated Emirati operations in the region, Egypt reinforced the Halayeb triangle and sent troops to the Emirate base in Eritrea, not far from the Sudanese border. For Eritrea, Egypt’s dispatch of soldiers was a welcome boost against a common adversary, Ethiopia, which was amassing troops on the Eritrean border.

In a further show of force earlier this year, Egyptian President Abdel Fattah al-Sisi inaugurated the Berenice military base, the largest in the Red Sea region, in a ceremony attended by Abu Dhabi’s crown prince and the Saudi deputy defense minister. Egypt is reportedly also seeking a military base also in Somaliland, adding to tensions with Ethiopia over the latter’s Renaissance Dam on the Nile.

Amid Turkey’s thriving ties with Somalia, the UAE has sought to boost its clout in Somaliland and Puntland, both of which broke away from Mogadishu’s control in the 1990s. Emirati companies have won multi-million-dollar projects to expand and develop ports in the two regions. The influence war in the Horn of Africa has prompted Saudi Arabia to acquire a base in Djibouti, following in the steps of China, France and the United States.

The ouster of Sudanese President Omar al-Bashir in 2019 came as a blow to Turkey in the Red Sea and the Horn of Africa, with the Saudis and Emiratis seeking to woo Sudan’s new leadership with $3 billion in assistance.

Erdogan’s ambitions in Africa, however, have flared up anew since the signing of two critical deals with the Tripoli government in November 2019 and the ensuing Turkish military intervention in Libya. Turkey is seeking a lasting air and naval presence in Libya, a plan that if realized would further boost its Africa venture. Erdogan’s efforts to advance ties with former French colonies such as Chad, Gabon, Mali, Mauritania, Niger and Senegal have already stoked the rivalry between Turkey and France.

In the Horn of Africa, Ethiopia is emerging as a second potential partner for Turkey after Somalia amid the country’s simmering dispute with Egypt and Sudan over the waters of the Nile. The enmity between Ankara and Cairo since the overthrow of the Muslim Brotherhood in 2013 has already brought them to loggerheads in Libya, so it seems logical that Turkey might try to use ties with Ethiopia as a further leverage against Egypt.

And lacking any Arab backing against Egypt, Ethiopia appears eager for a counterbalance with a Muslim country like Turkey. A special envoy of Ethiopia’s prime minister met with Turkish Foreign Minister Mevlut Cavusoglu in Ankara July 17. Some saw the visit as a Turkish gesture of support for Ethiopia in its water row with Egypt, and there was even speculation that Ankara might offer radar and missile systems to protect the Renaissance Dam. Turkish media claimed the Ethiopian envoy suggested a mediation role for Ankara, but with the ongoing crisis in Turkish-Egyptian ties, Ankara is hardly capable of such mediation.

The pro-government Yeni Safak newspaper commented that Turkey already enjoys a “strategic alliance” with Somalia in the Horn of Africa and “developing a similar relationship with Ethiopia amounts to a clear message to the UAE and Egypt.”

An analysis run by the state-owned Anatolia news agency, meanwhile, argued for a cautious approach to the Egypt-Ethiopia row. “Some may conclude that Turkey will side with Ethiopia for the sake of weakening the Sisi regime, but Turkey should follow a more cautious policy as it cannot afford losing both Egypt and Sudan in the long term,” the analysis read. Ethiopia is unlikely to back Turkey’s position in Libya, it stressed, adding that some “dark quarters” are already “on the lookout for an opportunity to accuse Erdogan of striking Arabs via the Blue Nile.”

According to Anatolia, the Ethiopian ambassador to Turkey, Girma Temesgen Barkessa, told the press at home that Ankara would provide expertise to Ethiopian diplomats on hydro-political negotiations in a show of support for the Renaissance Dam. Barkessa had earlier described Turkey as a “strategic partner” and called for more Turkish investments in Ethiopia. They currently amount to $2.5 billion, or a third of all Turkish investments in Africa.

Libya’s southern neighbor Niger is another country on Turkey’s radar in the influence war in Africa. Cavusoglu visited Niger July 21, signing a cooperation deal on military training among others. The deal sparked speculation that Turkey is seeking a military base in Niger, though no reliable information has emerged thus far to corroborate the claims. Similarly, Turkey has been sounding Chad out to add a military dimension to its ties with Libya’s second neighbor to the south.

Turkey’s cooperation with Niger involves the field of mining — another irritant for the French, who hold a 63% share in the operation of Niger’s uranium mines. In January, Turkey signed a deal for mineral exploration in three fields in southwestern Niger. Around the same time, Erdogan said Somalia had invited Turkey to explore for oil in its seas. Somalia is expected to announce the winners of its first oil and gas licenses early next year.

Despite all those ambitious moves, Turkish trade and investments have yet to grow to an impressive level in Africa. According to official figures, the country’s annual trade volume with the continent stood at about $21 billion in 2018 and 2019. And by militarizing its Africa policy, Turkey risks opening cracks in the network of ties it has built across the continent over the past two decades.