Why hasn't the EU lifted travel ban on Turkey?

The European Union decision to exclude Turkey from the list of travel-friendly countries seems to have more to do with political disagreements rather than public health concerns. 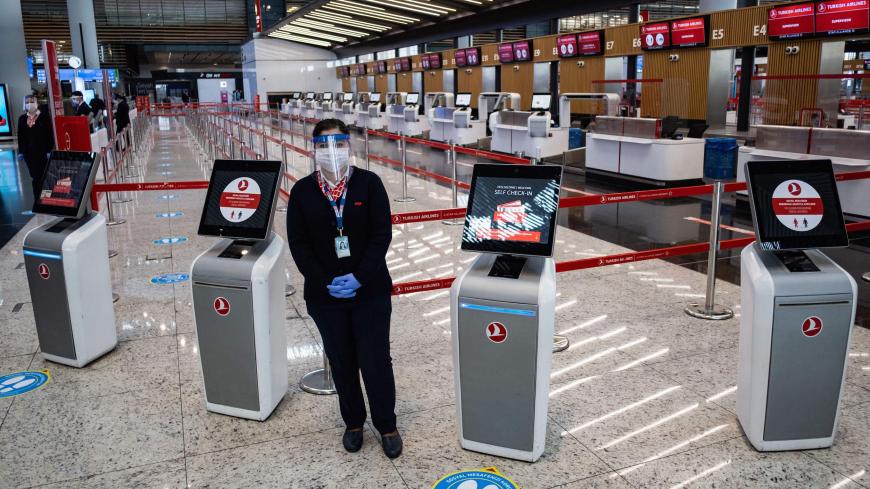 Employees wearing protective face masks wait for passengers at the Istanbul Airport on the first day of the resumtion of domestic flights which were halted since March 26 due to the spread of the novel coronavirus, COVID-19, in Istanbul on June 1, 2020. - YASIN AKGUL/AFP via Getty Images

Beginning with July 1, The European Union opened its borders to visitors from 15 countries. The full list of the first 15 countries ranges from Algeria to Uruguay, from Georgia to South Korea, from Serbia and Montenegro to New Zealand, from Morocco to Canada. Europe will open its borders to China as well, provided China opens up to travelers from the EU.

European doors will remain closed to travelers from the United States, Brazil, and Russia, due to the rate of the spread of coronavirus. Turkey, a candidate member of the EU, which performed well above the EU average in the Covid-19 struggle, however, is among those countries that the travel ban from and to the EU will remain in effect.

Given the success of the Turkish Covid-19 strategy, the disappointment expressed by the spokesperson of the Turkish Foreign Ministry for the decision was not unexpected.

Indeed, Turkey’s coronavirus statistics, for instance, in comparison to EU member Sweden, are much better. The Turkish population is almost nine times as much as Sweden, but the number of cases per 1 million is 2,370 in Turkey, while the figure stands at 6,777 in Sweden. The death rate in Turkey is 60.8 per 1 million in Turkey, and 528.1 in Sweden. Even in comparison to Germany, which has roughly the same population as Turkey and is lauded for a successful Covid-19 strategy, Turkey seems to be doing as well as Germany. The number of total confirmed cases in Germany is some 200,000 and in Turkey is some 195,000.

The reason for Turkey’s exclusion from the EU’s reopening can be explained by political reasons instead of public health concerns.

According to the New York Times, the EU is putting into effect a complex policy, by not opening its borders to some countries like the United States, Brazil, and Russia, sought to balance health concerns with politics, diplomacy, and the desperate need for tourism revenue. Although Turkey is not mentioned in the NYT story, the exclusion of it is the most striking example for the EU’s political considerations.

The EU constitutes the main trading partner of Turkey. More than 50% of the Turkish trade is with the EU plus the United Kingdom.

Moreover, more than ever, Turkey needs tourism revenues during a period when its foreign exchange reserves are increasingly depleted, and the country is facing a looming catastrophic financial crisis. In the year 2019, in the first nine months, 41 million tourists visited Turkey, and the annual tourism revenue amounted to 34,5 billion dollars. The Russian, German, and British tourists constituted the first three far ahead of the rest that visited the country in 2019.

To be deprived of tourism revenue in 2020 may have a devastating effect on Turkey’s economy, and it is unthinkable that the European leaders are not aware of this simple fact. Why then Turkey’s exclusion?

French President Emmanuel Macron’s statement a day before the decision provides a clue. In a joint press conference with the German Chancellor Angela Merkel, Macron bashed Turkey with vitriolic words.

All the French media outlets highlighted the remarks of Macron flanked by Merkel and the presser came only 24 hours before Germany would take over the EU presidency.

In his statement, Macron described Turkey as a country that “pretends to be a NATO member, in any case, it claims so.”

France’s discomfort with Turkey’s policies is not new. On June 22, Macron lamented Ankara 22 for playing a “dangerous game” in Libya and mentioned the “brain death of NATO.”

On June 10, French and Turkish frigates came dangerously close to an armed confrontation. The Turkish frigates escorting a cargo ship refused to let a French frigate under NATO command inspect the cargo.

Alleging Turkey's intervention in Libya increased the terrorist threat to Europe, Macron emphasized that Turkish drilling agreements signed with Libya’s internationally recognized Government of National Accord in the Eastern Mediterranean threaten the integrity of EU member countries including Greece and Cyprus.

"I consider today Turkey does not respect any of the commitments made at the Berlin conference [January 2020], increased its military presence in Libya since then and massively reimported jihadist fighters from Syria," Macron said.

Apart from its strong wording, the symbolism of Macron remarks should not be missed. The remarks came at Schloss Meseberg, a German government guest house near Berlin, in the presence of the German Chancellor Angela Merkel, a day before she took over the EU presidency.

There is every reason to think Merkel, even if reluctantly, is on board with Macron vis-a-vis Turkey's policies in the Eastern Mediterranean and Libya.

Not letting the Europeans travel to Turkey and not allowing Turks into the EU, with the consideration it may inflict on the ailing Turkish economy, should be seen as issuing an expensive political bill to Ankara.

The list of safe countries will be reviewed every two weeks to reflect the changing realities of the coronavirus outbreaks in individual nations, the EU officials said, and countries could be added or removed from the list.

That is the best the Turks can hope at the moment.