Advancing the East-Med project one step further, Israel’s government ratified the agreement signed last January with the governments of Cyprus and Greece. 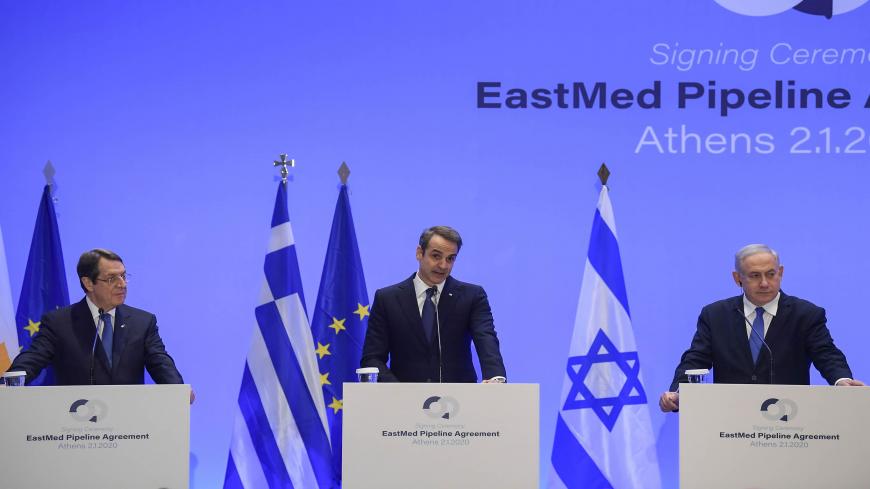 Israel’s government ratified July 19 the East-Med pipeline agreement, which was signed last January with the governments of Cyprus and Greece. The three countries have agreed to advance a project of a pipeline that would transport natural gas from the eastern Mediterranean to Europe.

According to the project’s outline, the 1,900-kilometer (1,180-mile) undersea pipeline would be able to transfer up to 12 billion cubic meters a year from offshore gas reserves between Israel and Cyprus to Greece, and then onto other countries in southeast Europe. Italy is expected to be the first entry point to the continent. The project aims at providing around 10% of the European Union’s natural gas needs, thus diminishing the continent’s energetic dependence on Russia.

In 2009, drillings offshore located a significant gas find named Tamar. A year later, more gas was discovered in another undersea location named Leviathan. While some of the gas is expected to be sold to neighboring Egypt and Jordan, the East-Med pipeline should offer Israel the possibility of moving significant gas quantities to Europe. The country aspires to launch the pipeline in five to six years, with the hope that energy prices will go up again by then, after the coronavirus-induced crash.

Energy Minister Yuval Steinitz has been spearheading the project practically since its inception. His ministry says that pre-studies of the project indicate good technical, economic and financial feasibility. It also estimates that once the coronavirus pandemic is over, energy prices will stabilize anew.

For Israel, the construction of the pipeline could offer great economic advantage, on top of security benefits and a strong alliance with the partnering countries. Upon the signature of the agreement in January, Turkey’s Foreign Ministry slammed the deal, calling it "a new example of futile steps in the region that try to exclude our country and the Turkish Republic of Northern Cyprus." Tensions over the project have grown even further in the last few months, over Turkey’s own exploration in the area and a deal it signed with Libya, delimitating maritime jurisdictions in the Mediterranean Sea.

On June 4, Turkish President Recep Tayyip Erdogan met in Ankara with Libya’s UN-supported Prime Minister Fayez al-Sarraj. Erdogan said on that occasion that his country would step up its cooperation with the Libyan government, to drill for natural resources in the eastern Mediterranean. A day later, EU spokesman Peter Stano reiterated European support of the project, saying that the pipeline is a Project of Common Interest under the 4th Union List and the related feasibility study receives EU funds.

Israel has been careful not to react publicly to Turkey’s statements on the issue, or provoking Erdogan in any way on his conflict with Greece and Cyprus. Jerusalem must now focus on getting Italy on board, for the project to be indeed feasible.

Still, even before the launching of the pipeline construction, Israel already registered some security and strategic achievements. On June 16, Greek Prime Minister Kyriakos Mitsotakis visited Israel and met with Prime Minister Benjamin Netanyahu. He was the first leader to arrive to the country since the pandemic began. Showcasing again bilateral ties, the Greek parliament ratified July 7 an agreement with Israel for the procurement of defense equipment and services, in what is considered further strengthening of ties between the two energy allies.

More so, Greek Ambassador to Israel Panagiotis Sarris welcomed the July 19 ratification, throwing also in a warning to Turkey over its objection to the project. The East-Med pipeline “turns energy into a catalyst for regional cooperation and stability, for the benefit of all. We want Turkey as an equal partner and not as the neighborhood bully, but this is currently proving difficult,” Sarris said.