The visit in Israel of Greek Prime Minister Kyriakos Mitsotakis reflects a growing convergence of interests between the two countries. 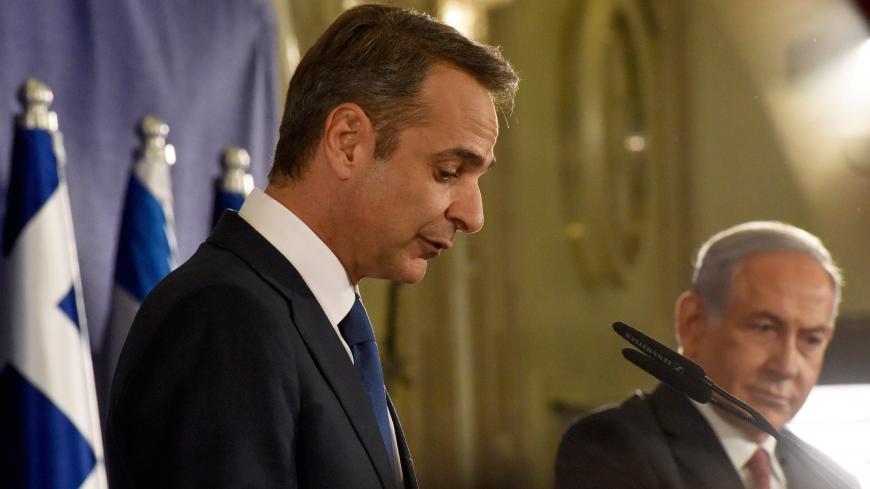 On his first trip abroad since the outbreak of the coronavirus, Greek Prime Minister Kyriakos Mitsotakis met with Prime Minister Benjamin Netanyahu today in Jerusalem. Mitsotakis is the first leader to arrive in Israel since the pandemic began. The Greek prime minister arrived in the country heading a large official delegation — including five ministers who are scheduled to hold separate meetings with their Israeli counterparts. The visit constitutes the fourth Government-to-Government (G2G) forum. After the tete-a-tete encounter, a larger meeting was convened, where the two leaders signed three memorandums of understanding: one each on cyber, agriculture and tourism.

Iris Ambor, director of the Foreign Ministry’s Southern Europe Department, told journalists before the meetings, “We will discuss the peace plan of President [Donald] Trump, and we will talk about energy and the EastMed [gas pipeline project], [and about] stability in the Middle East with an emphasis on Iran and Lebanon.’’ She said the two leaders will discuss the coronavirus crisis and ways to put bilateral tourism back on track.

Indeed, the issue of resuming flights and reopening Greece to Israeli tourists represented a top priority for Mitsotakis in his meeting with Netanyahu. It now seems that Israeli tourists could fly to Greece as of the beginning of August, without entering a 14-day quarantine upon their return. "Over a million Israelis go to Greece every year. This is an expression of Israelis' love for Greece," stated Netanyahu. “This also depends on what happens with the coronavirus pandemic, but if the numbers allow it, this [Aug. 1] is the target date for opening the skies,” he told reporters. For the past several weeks, Netanyahu has been discussing with counterparts in Greece, Cyprus, Austria and other countries less infected by the virus possible ways of relaunching regional tourism and the creation of bilateral travel corridors.

Another topic brought up by Mitsotakis was increasing Turkish activity in the Mediterranean, citing “recent incidents of illegal and provocative Turkish behavior at our sea, air and land border” and “the destabilizing effect that Turkey has made vis-a-vis its relationship with Libya.’’

Netanyahu brought up in the meeting ongoing talks on the East-Med pipeline project, which should promote the construction of a 1,900 km undersea pipeline from Israeli waters to the western Greek mainland via Cyprus and Crete.

Jerusalem and Athens see eye to eye on almost all of the above issues. Bilateral ties have been reinforced in the past few years, especially on the backdrop of the deterioration in Jerusalem’s ties with Ankara. Thus, the only really delicate topic discussed between the leaders was Netanyahu’s annexation plan. Considering Greece as an important ally, Netanyahu hopes to dilute the European Union’s objection to annexation. Netanyahu does not expect Greece to support his plan, but he would like to see it thwarting a joint EU declaration against it or an EU initiative for such a resolution at the United Nations. Asked about the issue, Israel’s Ambassador to Greece Yossi Amrani told the press, "We expect Greece to be an anchor of support for us in the [European] Union."