In the past few weeks, Ankara has made several overtures toward rapprochement with Israel, yet Jerusalem seems to be waiting for something solid. 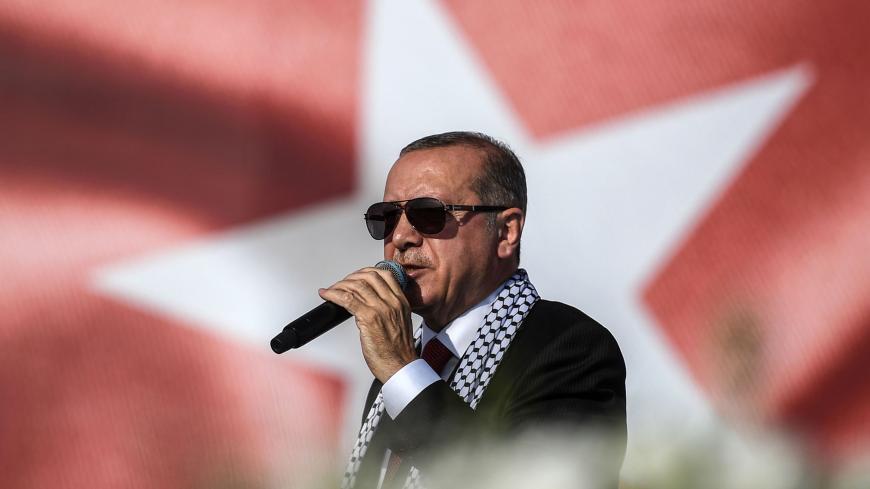 Turkish President Recep Tayyip Erdogan addresses a protest rally in Istanbul on May 18, 2018, against the recent killings of Palestinian protesters on the Gaza-Israel border and the US Embassy moving to Jerusalem. - OZAN KOSE/AFP via Getty Images

Multiple moves by Turkey in recent weeks indicate that relations between Jerusalem and Ankara may change, or that Turkey would like them to.

Bilateral ties between the two countries have been strained for over a decade, ever since the 2010 Mavi Marmara incident, where IDF soldiers shot and killed Turkish activists aboard a ship sailing towards Gaza under closure. They deteriorated further two years ago, when US President Donald Trump recognized Jerusalem as the capital of Israel. Following the ensuing deadly clashes between IDF soldiers with Gaza protesters, Ankara expelled Israel’s ambassador Eitan Na’eh, humiliating him at the airport upon departure. Jerusalem was left with little choice but to reciprocate, asking the Turkish consul, Husnu Gurcan Turkoglu, to leave the country.

Over the years, President Recep Tayyip Erdogan issued countless anti-Israeli and even anti-Semitic-toned statements, which sunk relations even lower. On Aug. 13, shortly after Trump announced the normalization of ties between Israel and the Emirates, Erdogan warned he was considering suspending diplomatic ties with Abu Dhabi and withdrawing the Turkish ambassador.

Erdogan did not go through with his threat. Four months later, when the United States announced the renewal of ties between Israel and Morocco, Turkey reacted differently. Foreign Minister Mevlut Cavusoglu said that no relations should come at the expense of the Palestinians, but he also noted that each country has the right to maintain whatever relations it chooses with another.

Last October this reporter wrote that Israeli-Turkish commercial ties and cultural exchanges were on the rise. On Nov. 30, Al-Monitor reported that the chief of Turkey’s national intelligence service Hakan Fidan had been holding secret talks with Israeli officials in efforts to restore bilateral relations. On Dec. 7, the Tel Aviv Moshe Dayan Institute proposed that the two countries review maritime borders in the Mediterranean Sea. The article was co-written by retired Adm. Cihat Yayci, a close associate of Erdogan, together with university researcher Zeynep Ceyhan.

Another sign came in recent publications on a conversation held between Azerbaijan President Ilham Aliyev and Turkey’s Erdogan. Aliyev reportedly suggested to Erdogan various paths to improve relations between Turkey and Israel. Erdogan apparently reacted positively to the ideas.

Then came reports on Turkey’s intention to nominate Ufuk Ulutas as its new ambassador to Israel, after two years without one. On Dec. 25, Erdogan told reporters that Turkey would like to have better ties with Israel. He also said and that bilateral intelligence contacts are likely to continue. However, Erdogan did not go back on his pro-Palestinian stance, stating, “The Palestine policy is our red line," and "If there were no issues at the top level, our ties could have been very different.”

Official Israel had refused so far to react to the issue of the new ambassador or to Erdogan’s latest statement. Experts in Israel indicated that if indeed nominated, the Turkish new ambassador might not move in soon if at all. He might stay in Ankara and shuttle between the two countries. A diplomatic source told Al-Monitor that Jerusalem was not planning any changes to the level of representation in Ankara. The embassy is currently headed by a charge d’affaires.

Turkey’s shift on Israel is certainly not innocent and can be attributed to two main game-changers. First, there is the imminent new administration in Washington. Ankara would like to turn a new page with the Joe Biden administration and also with the European Union. The second factor is the recent upgrading in Israel’s status internationally and within the Arab world.

But what about Israel? Where does it stand on this new Turkish goodwill? And why has official Israel kept mum on all of these positive signs?

Hay Eytan Cohen Yanarocak from the Jerusalem Institute for Strategy and Security is one of Israel’s top experts on Turkey. For him, Israel’s lack of public reaction does not mean it's ignores the developments. “Israel is of course interested in true normalization of ties, but it is waiting to see that Ankara is truly serious about it. As far as Israel is concerned, three indicators could signal that. Israel would like to see the return of a Turkish ambassador, Israel demands that Turkey ends its support of Hamas and Israel needs to see Turkey and Erdogan no longer issue hostile statements. If all this happens, Israel will obviously not refuse the rehabilitation of diplomatic ties."

The issue of Turkey and Hamas is especially crucial for Israel, Foreign Minister Gabi Ashkenazi has insisted on several occasions. Last August, charge d’affaires Roey Gilad said that Israel had warned Turkey last year that Hamas was carrying out terror-related activities in Istanbul and that Turkey had given passports to a dozen Hamas members in Istanbul. On Oct. 22, the Times of London reported that Hamas had set up a secret headquarters in Turkey for cyber warfare and counterintelligence operations.

Cohen Yanarocak noted that the regional geopolitical situation has dramatically changed over the past decade. In past years, Jerusalem felt indebted to Turkey as the first Muslim country to recognize Israel. It is clearly in Israel’s interest to normalize ties with Turkey, but Israel has also other interests. He argued, “With its pro-Palestinian stance, Turkey had turned itself ironically into the main architect of the Israel-Greece-Cyprus alliance. In my opinion, Israel won’t sacrifice its relations with these two countries for the sake of fragile ties with Turkey."

Prime Minister Benjamin Netanyahu invested great efforts in consolidating the Israel-Greece-Cyprus alliance. He is also very invested in in advancing the East Mediterranean Gas Forum, which is based in Cairo. Apart from Israel and Egypt, this forum includes Greece, Cyprus, Italy and Jordan, all countries strategically important to Israel. And in the spirit of Israel’s rapprochement with Gulf states, the United Arab Emirates recently joined the forum as an observer. And so with Hamas still in Istanbul and with old and new friends getting closer, Israel is in no hurry to offer Erdogan any gifts.