An article published in the Tel Aviv University Turkeyscope review might suggest that Ankara wants to rehabilitate its relations with Jerusalem. 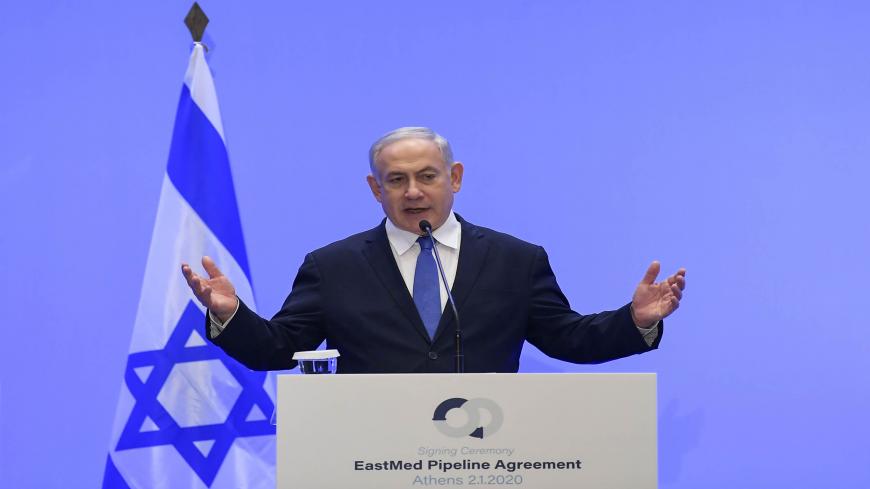 Israeli Prime Minister Benjamin Netanyahu speaks during a press conference, following the signing ceremony of an agreement for the EastMed pipeline project designed to ship gas from the eastern Mediterranean to Europe, Athens, Greece, Jan. 2, 2020. - Aris Messinis/AFP via Getty Images

The Tel Aviv Moshe Dayan Institute published Dec. 7 an exceptional article, titled "Israel is Turkey’s Neighbor Across the Sea: Delimitation of the Maritime Jurisdiction Areas between Turkey and Israel." The article appeared in the institute’s publication Turkeyscope, edited by Hay Eytan Cohen Yanarocak. It was co-written by retired Adm. professor Cihat Yayci, a close associate of Turkish President Recep Tayyip Erdogan and the architect of the Turkey-Libya maritime delimitation agreement, together with university researcher Zeynep Ceyhan.

Senior Turkish figures rarely publish articles in Israeli forums, but Yayci’s text is sensational in its content as well, as it proposes to redraft the exclusive economic zones in the Mediterranean Sea. The article discusses the possibility of signing a new maritime delimitation agreement between Turkey and Israel, at the expense of Cyprus. In other words, it proposes that contested maritime areas claimed by Cyprus should be under Israeli sovereignty. The map that accompanies the text proposes transferring blocs 8, 9, 11 and 12 in the Mediterranean Sea from Cypriot to Israeli hands.

Even before its publication, the expected article generated much interest in Israeli media. Relations between Israel and Turkey have deteriorated since the 2010 Mavi Marmara incident, where Turkish activists on their way to Gaza were killed by Israeli fire. Israel has since apologized and compensated the families of the victims. Still, Erdogan has been adopting over the years an even harsher tone against Israel, especially on the Palestinian issue. His remarks often border on antisemitism. Israel is also furious over Ankara hosting Hamas headquarters, and for offering passports to senior Hamas militants. Another point of friction is Turkish activities in East Jerusalem in support of several Palestinian charity outfits.

With all of the above, the publication of Yayci’s article was perceived in Israel as a positive sign. Interviewed by i24 News, Cohen Yanarocak said that the article should be taken seriously. "It is a new step for the Israeli-Turkish relations. When a senior Turkish figure is mentioning such a proposal, this is basically paving, preparing a new infrastructure for the Israeli-Turkish relations, and it is mending Israel’s reputation, [so it could be considered] as an emerging ally in the eastern Mediterranean," he explained.

Of course, this top expert on Turkey says Ankara has huge steps to take before bilateral ties could be normalized. It must end its verbal attacks against Israel, and it must give up its intimate ties with Hamas. Both countries need to bring back to Ankara and to Tel Aviv their consuls and their ambassadors, he suggests.

Official Jerusalem is cautious over this new positive signal from Ankara. Speaking at the Manama Dialogue Dec. 6, Foreign Minister Gabi Ashkenazi referred also to Turkish involvement in the Mediterranean. "We are following very closely their activities in the region. We are concerned with their aggressiveness in the East Med. We are in close contact with our allies in the region and with other neighboring countries in the eastern Mediterranean like Greece, Cyprus, Egypt and others," he said.

Ashkenazi went on to say he hoped for Turkey to revise its regional policies, adding, "I don’t see a change in our relationship with the Turks, but we are watching very closely developments as they evolve. … We hope that Erdogan will conduct his foreign policies differently, including by the way the fact that he is hosting — as we speak — Hamas headquarters."

Israel Hayom newspaper reported Dec. 8 that four months ago, officials in Ankara sent their Israeli counterparts a message about Turkey's desire to launch energy talks, but with the coronavirus pandemic gaining terrain, contacts produced nothing. Also, on Nov. 30, Al-Monitor’s Amberin Zaman reported that the chief of Turkey’s National Intelligence Agency has been holding secret talks with Israeli officials, as part of efforts to normalize bilateral relations.

A diplomatic source speaking on condition of anonymity told Al-Monitor that Erdogan is probably worried over a tougher policy stance the Biden administration is expected to adopt on Turkey. "Ankara might estimate that warming up ties with Jerusalem could soften Washington’s new policy," he said.