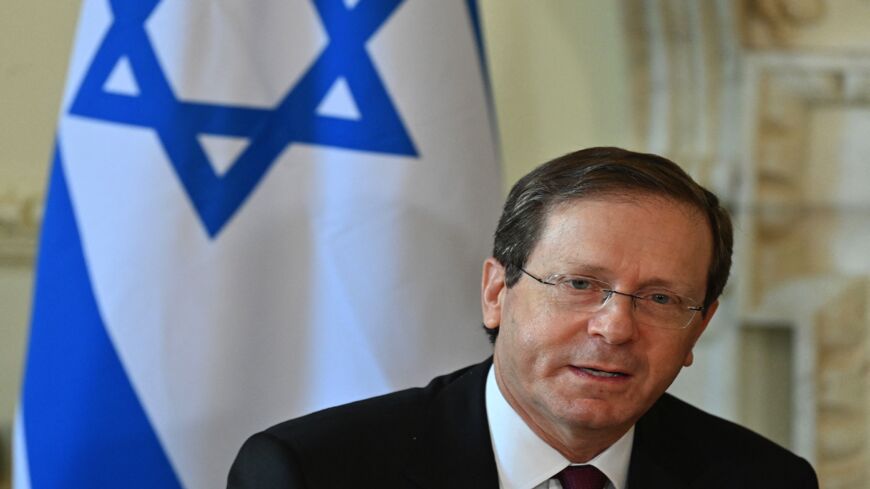 Responding to questions about changes in diplomatic relations with Israel, Turkish President Recep Tayyip Erdogan said that his office was “having talks with President (Isaac) Herzog" and he may be visiting Turkey soon.” Emphasizing similar willingness on the Israeli side for fully normalizing bilateral relations, Erdogan said that “Prime Minister Naftali Bennett also has a positive approach."

Herzog declined to comment on this information, but an unnamed Israeli diplomatic source confirmed today that Herzog's office is in contact with Erdogan's office to examine the possibility of a visit. No date was mentioned by either side.

If this really happens, Herzog would be the first Israeli president to visit Turkey since Shimon Peres in 2007. Peres came at the time to Ankara at the invitation of then-Turkish President Abdullah Gul, addressing the Turkish parliament, participating in a tripartite meeting with Palestinian President Mahmoud Abbas and meeting with then-Turkish Prime Minister Erdogan.

The last visit in Turkey of a senior Israeli official was in 2017 when then-Energy Minister Yuval Steinitz traveled to the country. Steinitz was in Turkey four years ago for the 22nd World Petroleum Congress in Istanbul. Last year, still under the Netanyahu government, he was invited to Turkey again, this time for the Antalya Diplomacy Forum, in what should have been the first visit of an Israeli minister in Turkey since Ankara recalled its ambassador in Israel three years before that. Still, Ankara withdrew its invitation to Steinitz at the very last moment over tensions on the Jerusalem Temple Mount compound and the Gaza border, and the visit was canceled.

Bilateral relations have been especially strained since the 2010 Mavi Marmara Flotilla incident in which nine Turkish nationals were killed by Israeli fire. Over the years, Erdogan multiplied anti-Israeli and antisemitic-toned declarations. In 2016, both countries reappointed ambassadors as part of a reconciliation deal (pushed by then-US President Barack Obama and following an Israeli apology over the Mavi Marmara killing). But in 2018, Ankara recalled its ambassador over the decision of the Trump administration to relocate its embassy to Jerusalem. Israel responded by recalling its own ambassador to Ankara Eitan Na’eh. Since then, the Israeli Embassy is headed by a charge d’affaires (the current one being the very experienced Irit Lilian).

Erdogan started signaling that he is interested in mending ties with Israel in 2020. In December that year, the Tel Aviv Moshe Dayan Institute published an article about delimiting new maritime borders in the Mediterranean, which was co-written by Cihat Yayci, a close associate of Erdogan.

Signals for rapprochement became stronger after the establishment last year of the Bennett-Lapid government.

For instance, Erdogan was personally engaged last November in efforts to release from jail in Istanbul Israeli tourists Natali and Mordi Oknin, detained after taking photos of the presidential palace there. Both Herzog and Bennett called Erdogan to thank him for his efforts in securing the release of the couple.

Another example was a meeting Erdogan held last December at his presidential palace with a delegation of local rabbis and Turkish-Jewish leaders. At the meeting, Erdogan said that relations with Israel were “vital for the security and stability of the region,” adding that “our relations with Israel in the fields of economy, trade and tourism are progressing in their own way.”

On Jan. 13, Erdogan called Herzog to offer him condolences over the passing of his mother, Aura Herzog, earlier that week. A statement issued by the office of Herzog said, “Having sent a letter of condolence a few days ago, the president of Turkey called to offer his personal sympathies to the president and his family.”

Official Jerusalem has been keeping a low profile over these rapprochement statements by Erdogan, mistrusting the intentions of the Turkish leader. Several senior Israelis have noted in the past two years that in order to prove its willingness for rapprochement, Ankara must first expel from its territory Hamas operatives and close down the Hamas office in Istanbul. On Dec. 23, after Israel arrested in the West Bank 50 members of a Hamas cell that was directed from Istanbul, Foreign Minister Yair Lapid reiterated this demand. “Hamas’ offices in Istanbul will be shut down. We must prevent these heinous acts of terrorism against Israeli citizens everywhere and under any conditions,” said Lapid.

Another reason for Jerusalem’s cautious approach is the strong alliance forged in recent years between Israel, Greece and Cyprus, especially in the domains of security and energy. A key element of this alliance is the EastMed pipeline project that should transfer natural gas from Israel to Europe. Israel has clarified lately that any rapprochement with Turkey will not come at the expense of its strong ties with Cyprus and Greece. Backtracking on the Trump administration approach, the Biden administration announced today it was withdrawing its support of the EastMed project.

At his exchange with the reporters yesterday, Erdogan addressed the possibility of bilateral cooperation with Israel in the field of energy. “We previously had some progress in transport of Israeli gas to Europe through Turkey. … We, politicians, exist to maintain peace, not war,” he said.