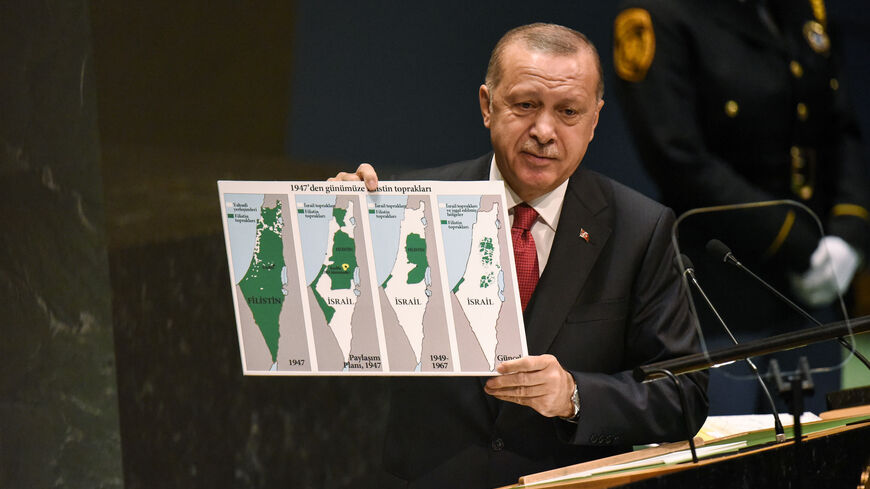 Turkish President Tayyip Erdogan said today that his country and Israel may work together on exporting Israeli natural gas to Europe. "We can use Israeli natural gas in our country, and beyond using it, we can also engage in a joint effort on its passage to Europe," Erdogan told reporters, adding, "Now, God willing, these issues will be on our agenda with [Israel’s President Isaac] Herzog during his visit to Turkey."

Yesterday, Feb. 3, Erdogan announced that he will host Herzog for an official visit in Turkey in mid-March. He also said that both Turkey and Israel are eager to restore bilateral relations, which have been strained for over a decade.

Erdogan had already alluded to Herzog visiting Turkey on Jan. 19. Responding to questions on the possible rehabilitation of bilateral relations with Israel, the Turkish president noted that his office was “having talks with President Herzog" and that the Israeli president may visit Turkey soon. Erdogan also claimed Israel was interested in restoring diplomatic ties, saying, “Prime Minister Naftali Bennett also has a positive approach."

Erdogan's comments join many other signals from Ankara to Jerusalem in the past few months.

On Nov. 18, Turkey agreed to release two Israeli nationals detained on suspicion of espionage. Tourists Natali and Mordi Oknin were arrested by Turkish authorities after taking a picture of the presidential palace in Istanbul, angering the Israeli public. Erdogan engaged personally in the affair and the two were released after two weeks in prison. As token of appreciation, Herzog and Bennett each called Erdogan separately to thank him.

On Jan. 13, Erdogan called Herzog to offer his condolences on the death of his mother Aura earlier that week.

On Jan. 20, Turkish Foreign Minister Mevlut Cavusoglu called his Israeli counterpart Yair Lapid to inquire about his health after the latter had recovered from COVID-19. It was the first conversation between Turkish and Israeli foreign ministers in almost a decade.

Israeli-Turkish relations have been cold and even hostile ever since Erdogan took office, especially since the 2010 Mavi Marmara incident in which nine Turkish nationals were killed by IDF fire. In 2013, under pressure by US President Barack Obama, then-Prime Minister Benjamin Netanyahu called Erdogan and apologized over the incident. He promised to pursue negotiations for a compensation agreement between the two countries on compensation for the families of the nine victims. Erdogan reportedly accepted Netanyahu’s apology, but bilateral relations did not improve. On multiple occasions, Erdogan made anti-Israeli remarks, some of them bordering on anti-Semitism. Then, in May 2018, following deadly clashes between Israeli security forces and Palestinians on the Gaza border, Turkey expelled Israel’s ambassador in Ankara, Eitan Na’eh, who was humiliated with a strict and public security screening at the airport. In return, Jerusalem expelled the head of the Turkish diplomatic mission in Israel.

The Turkish approach seemed to change some two years ago, when Erdogan started sending signals of willingness to mend ties with Israel. Still, considering their difficult history, Jerusalem seems hesitant to respond to Turkey's outreach, perhaps suspecting that Erdogan is motivated by other reasons. Considering the economic crisis it is facing and in view of regional changes such as the Abraham Accords and the new US administration, Turkey may see Israel as means to repair its status in the Middle East as well as with Washington.

Ankara’s new policy on the region is reflected, for instance, in the series of energy and technology investment agreements signed last November between Turkey and the United Arab Emirates. The agreements were signed on the occasion of Abu Dhabi Crown Prince Sheikh Mohammed bin Zayed al-Nahyan’s visit in Ankara, which was the first of its kind in years. With Israel and the Emirates now close allies, Turkey might push for trilateral economic cooperation.

While Jerusalem seems to find it hard to trust Erdogan personally, its hesitancy goes further.

The first concern is the strategic alliance between Israel, Cyprus and Greece first nurtured by Netanyahu. Bennett, Lapid and Defense Minister Benny Gantz continue to reinforce this alliance, reiterating their commitment to it since taking office with bilateral and trilateral meetings at the highest levels. For instance, on Jan. 20, Gantz hosted in Tel Aviv his Greek counterpart Nikos Panagiotopoulos.

The second reason is that Israel would like to see deeds beyond the nice words, especially on the issue of Hamas. It wants Turkey to close Hamas offices in the country and expel Hamas operatives living there. This position has been expressed multiple times by former Foreign Minister Gabi Ashkenazi when he was in office, and by Lapid now. Last November, Israel arrested 50 Palestinians in the West Bank suspected of membership in a terror cell directed from Istanbul. After the raid, Lapid said Jerusalem expects Hamas’ offices in Istanbul to be “shut down," saying, "We must prevent these heinous acts of terrorism against Israeli citizens everywhere and under any conditions.”

Lapid and Bennett demanding that Turkey act against Hamas in the country is probably why Ankara has identified Herzog as its preferred interlocutor. Herzog's championing a cautious dialogue with Ankara also serves Jerusalem, which is taking its time to decide where all of this is going.