For Jerusalem, Turkish President Recep Tayyip Erdogan's intentions for better relations need to be backed up with actions. 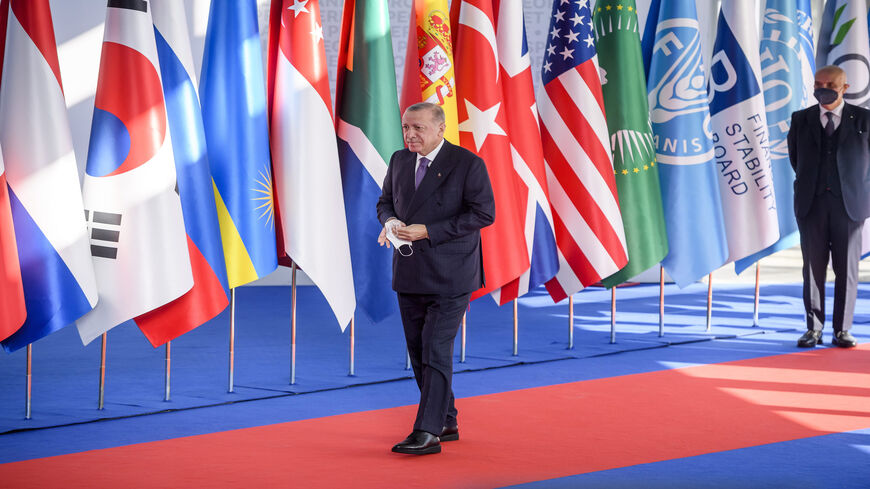 Israel’s President Isaac Herzog met Dec. 1 with Natali and Mordi Oknin, who were liberated two weeks ago from an eight-day detention in Turkey. The couple thanked the president for his efforts to release them.

For Jerusalem, the release of the couple was interpreted as a positive diplomatic signal by Ankara. Shortly after the release, Herzog called Erdogan to thank him for his personal involvement in the affair. A statement by Herzog’s office said that in the phone call, Erdogan “emphasized the importance that he attaches to relations with Israel, which he said were of key importance to the peace, stability and security of the Middle East.” Later that day, Bennett also called the Turkish president to thank him. It was the first phone call between the two leaders since Bennett took office.

Erdogan and his associates have made in the past year several positive declarations vis-a-vis Israel. But the release of the Oknin couple was the first time that Ankara made a tangible public move in this direction. Still, Jerusalem evidently expected and expects more, as could be seen in a tweet posted by Lapid Nov. 22. Lapid was calling for the closure of Hamas offices in Istanbul, following reports that this office was involved in the planning of a terrorist attack that was perpetrated in Jerusalem a day earlier.

But is Ankara ripe for taking such a step? The latest development on a possible rapprochement between the countries took place Nov. 29, when Erdogan publicly said Turkey would take measures to improve its ties with Egypt and Israel. He said that after a meeting in Ankara with Emirati Crown Prince Mohammed bin Zayed Al Nahyan. Following the meeting, the United Arab Emirates announced a $10 billion investment fund in different sectors in the Turkish economy.

Acknowledging the Emirati investment as a game-changer for the Turkish economy, Erdogan said, "Whatever kind of step that was taken with the Emirates, we will also take similar ones with the others [Israel and Egypt]." Erdogan then suggested the Turkish ambassadors could return to both Egypt and Israel. “Now when we have made our decision, we will of course be in a position to appoint ambassadors within a defined schedule,” said the Turkish president, without offering a timeline.

As a reminder, Ankara expelled Israeli Ambassador Eitan Na’eh in May 2018, after deadly clashes between Palestinians and Israeli security forces on the Gaza border. Ordered to leave the country, Na’eh underwent a strict security screening at Istanbul’s airport that required him to take off his shoes. After that, Jerusalem expelled the Turkish charge d’affair.

Hay Eytan Cohen Yanarocak serves at the Jerusalem Institute for Strategy and Security, and is considered one of Israel’s top experts on Turkey. He told Al-Monitor, “With such an incentive by a strong ally of Israel [the Emirates], we could now expect a change in Turkish foreign policy. In fact, even before this visit by Zayed, Erdogan wanted to end Turkish diplomatic isolation in the region, but his ties with the Muslim Brotherhood stood in the way of any rapprochement with either Egypt or Israel.”

He argued that Israel and Egypt have both realized in recent months that Erdogan has been weakened diplomatically, politically and economically, which is why he wants to warm up bilateral ties with both these countries in the first place. Yanarocak estimates that in the current situation, with Israel and Egypt having the upper hand so to speak, they will advance normalization with Turkey only if and when they score a diplomatic achievement in return.

Yanarocak said that following the Abraham Accords, Israel can count on multiple regional allies. Turkey is no longer special for Israel, the way it used to be a decade ago. Thus, if Ankara wants genuine normalization with Jerusalem, it would need to take meaningful steps, such as closing Hamas offices in Istanbul or expelling Hamas activists.

“The Emiratis have paved the way for Turkey to advance on the normalization track. It offered Turkey the incentive it needed to rid itself of Hamas and of the Muslim Brotherhood,” Yanarocak said. Returning the ambassadors or launching bilateral official visits will come only at a later stage, when Ankara makes real changes in its foreign policies, he concluded.