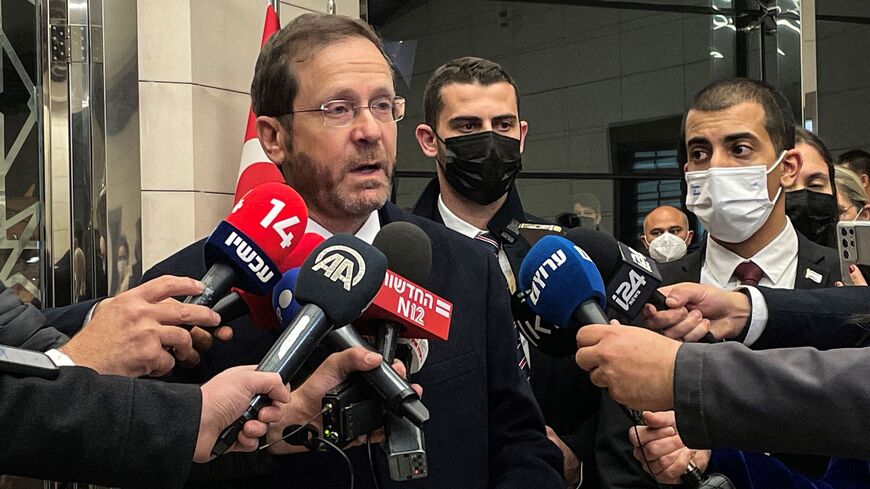 Israeli President Isaac Herzog speaks to press at the Ankara airport before boarding a plane for Istanbul, during his visit to Turkey, on March 9, 2022. Israel's president landed in Ankara today on a trip aimed at repairing fractured ties with Turkey, in the first visit to the country by an Israeli head of state since 2007. - DAPHNE LEMELIN/AFP via Getty Images

"The purpose of the initiative is to promote academic research in both countries. Every year Tel Aviv University welcomes thousands of Muslim and Christian students from Israel and around the world, and we will be delighted to extend this collaboration to leading universities in Turkey as well. Academia is a bridge between nations and a key to economic and social growth everywhere," said Tel Aviv University president professor Ariel Porat. The announced Academic Bridge Initiative strives for academic collaborations on different levels, including student exchanges, faculty program exchanges and joint research initiatives.

But the academic initiative between Israeli and Turkish institutions, the first of its kind in a decade, was not the only sign in recent weeks of warming bilateral ties.

On March 9, Israel’s President Isaac Herzog visited Ankara. It was the first official visit by an Israeli president in Turkey in many years. Addressing the press jointly with Herzog, Turkish President Recep Tayyip Erdogan said, "I am very pleased to host the Honorable President Herzog here at our residence in Ankara. I believe that this historic visit will be a turning point in relations between Turkey and Israel." He then added he hoped the two countries will develop deep relations and cooperation in many fields, especially in trade and economy.

On April 13, Turkey’s Directorate of Communications hosted seven Israeli journalists for a series of meetings with officials and tours of popular sites. The journalists invited traveled to historic mosques and synagogues, as their hosts promoted the [Turkish] idea that the country is a tolerant and safe home for diverse religions. The visit culminated with a meeting with Foreign Minister Cavusoglu.

The development reported on April 26 is even more telling of Ankara’s willingness to rehabilitate ties with Jerusalem. Lebanese newspaper Al-Akhbar reported that Hamas members based in Turkey and traveling abroad were not allowed to re-enter the country. Today, the Israeli newspaper Israel Hayom quoted an unnamed Palestinian official saying that "dozens of people identified with Hamas in various circles have been deported [from Turkey]." The official claimed that Turkey handed over several Hamas activists to Israel. He further explained that Turkey requested Hamas members to leave the country during the last few months, claiming that Israel had asked the Turkish government to send it a list of Hamas members. "In response, the Turks contacted Hamas and told them, 'You promised you wouldn't do anything like that here, so now you need to leave.'"

Israel has been asking for several years now that Turkey close the Istanbul office of Hamas and expel Hamas members residing in the country. Former Foreign Minister Gabi Ashkenazi, for instance, brought this issue up several times publicly. Ties between Israel and Turkey deteriorated after Erdogan took office, and especially since the Mavi Marmara flotilla to Gaza incident in which nine Turkish nationals were killed by Israeli fire. Apart from the Israel-hostile policies of Turkey and the allegedly antisemitic tone deployed over the years by Erdogan, the issue of Hamas' presence in Turkey has become a major source of bilateral diplomatic tensions. The above information is yet to be confirmed by official sources. Still, if this is true, it will certainly signal a significant shift in Ankara’s traditional stance and a clear gesture of goodwill toward Jerusalem.

Prime Minister Naftali Bennett has been quiet over the Turkish charm offensive of recent months, leaving President Herzog to handle the direct dialogue channel with Erdogan.

Evidently, this is also the preferred choice of Erdogan. The Turkish leader called Herzog on April 19 to voice “his concern and pain” over the ongoing tensions surrounding Jerusalem’s Temple Mount. Still, judging by reports, the conversation was much different than past statements of Erdogan concerning Temple Mount and Jerusalem. This time, he said he was happy to hear Israel’s firm commitment on maintaining the religious status quo at the holy site, indicating his willingness to continue working together with Herzog to maintain peace and calm in the region.

Hay Eytan Cohen Yanarocak from the Jerusalem Institute for Strategy and Security is one of Israel’s top experts on Turkey. For him, the communication channel established between Herzog and Erdogan seems to be working, to the point that Israel indeed closed the Temple Mount to Jews during this period, as per the request of Erdogan. He said that this decision became a win-win situation for Israeli-Turkish relations. Israel offered Turkey a diplomatic achievement, and Turkey could thus justify to the Arab world and to the Palestinians its policy of renormalizing ties.

Cohen Yanarocak noted now certain political willingness in Israel to normalize ties with Turkey, though perhaps more prudently than Erdogan wishes for. “After the month of Ramadan, the Turks will try to strengthen ties even further. Apparently, they want to put the emphasis on energy projects. But in order to advance projects of this kind, we must first of all strengthen trust. The rapprochement between Israel and Turkey is a serious milestone in current Turkish foreign policy. It is part of a new foreign policy that seeks to restore relations across all the Abraham Accords countries and the other regional countries with whom Israel has relations, such as the Emirates and Egypt, and also with Saudi Arabia.”

Cohen Yanarocak noted that Israel has now started reaping the regional fruits of the Abraham Accords. But while this process is en route, Bennett might take his time agreeing to travel to Ankara.