Turkish Foreign Minister Mevlut Cavusoglu's visit to Israel May 24 could finally open the way for both countries to reinstate their ambassadors. 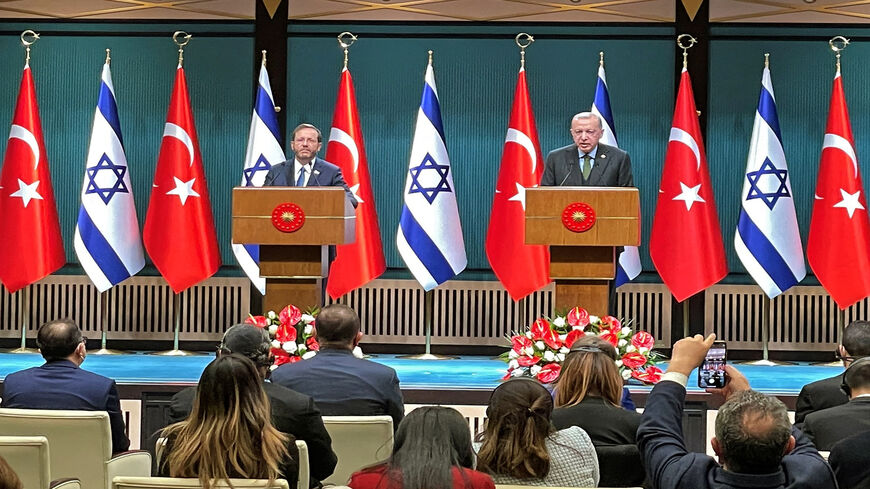 Israeli and Turkish representatives are both expected to participate May 10 at the spring meeting of the international donor group for Palestine (AHLC). But apart from the expected discussion this week in Brussels, Ankara has been wary recently of making public reference to the Palestinian issue. Rather, it is focusing considerable diplomatic efforts on rapprochement with Israel. Diplomats in Jerusalem told Al-Monitor they did not expect any skirmishes with Turkish colleagues in Brussels, despite ongoing Israeli-Palestinian tensions in Jerusalem and the Temple Mount.

Over the last year, Ankara had multiplied its efforts for rapprochement. Reluctant at first, Jerusalem is now certainly warming up to the idea. We have reported here last month on Israel no longer being silent over Turkey’s charm offensive. In fact, it seems that Israel has decided to play the game, and see how far Turkish President Recep Tayyip Erdogan will go.

The office of President Isaac Herzog published May 5 a list of heads of state who had congratulated Israel on its 74th Independence Day. The fourth name on that list — after US President Joe Biden, French President Emmanuel Macron and Chinese President Xi Jinping — was Turkish President Recep Tayyip Erdogan — before Indian President Ram Nath Kovind and German President Frank-Walter Steinmeier.

"In the new period in our relations, heralded by Your Excellency’s visit to our country in March, I sincerely believe that the cooperation between our countries will develop in a way that serves our mutual national interests, as well as regional peace and stability," said the letter sent by Erdogan to Herzog.

Herzog called Erdogan thanking him for the congratulatory letter, wishing Erdogan and the Turkish people a happy Eid al-Fitr. He said that they must keep working on the cooperation with one another for the benefit of both nations. According to an official Israeli statement, the two leaders discussed on the phone the importance of open and ongoing dialogue for maintaining calm and stability in the whole region, especially in present times, with Erdogan expressing his hopes that "the Eid al-Fitr holiday would bring joy, peace and affinity throughout the region."

These exchanges between Herzog and Erdogan came shortly after Turkish Foreign Minister Mevlut Cavusoglu announced he will visit Israel May 24.

Jerusalem awaits Cavusoglu's visit with some apprehension. While Erdogan had established Herzog as his main interlocutor, thus avoiding contact with Prime Minister Naftali Bennett, the Turkish minister will have to deal directly with Foreign Minister Yair Lapid. True, from the Turkish point of view, right-wing, pro-settler Bennett is more complicated to deal with publicly than centrist Lapid. Still, over the years, Lapid has not made a secret of his criticism of Ankara in regard to the presence in the country of senior Hamas operatives.

We have mentioned here a first, very significant step that Ankara took April 26 in that specific direction, to appease Jerusalem. Lebanese newspaper Al-Akhbar reported that Hamas members based in Turkey and traveling abroad were not allowed to reenter the country. It is important to emphasize that this announcement was apparently not just a declaration of intent, but related to a specific list of Hamas operatives in Turkey Jerusalem had transferred to Ankara, demanding to ban them from the country.

Cavusoglu will visit both Jerusalem and Ramallah in order to preserve a diplomatic balance and sideline criticism from the Palestinians on the recent rapprochement with Israel. While in Israel, he is expected to discuss a wide range of issues, including possible energy cooperation. According to the Turkish Foreign Ministry, Turkish Energy Minister Fatih Donmez is likely to accompany Cavusoglu on his trip, emphasizing exactly that.

The war in Ukraine has evidently made the issue of energy more acute. The quantities drilled off the Israeli shore are small in regard to global needs, yet it seems the timing could be right for Israeli-Turkish energy cooperation. In fact, on Jan. 18, before the Russian invasion of Ukraine, the State Department informed Israel, Greece and Cyprus that the United States no longer supports the proposed EastMed natural gas pipeline. Ankara took this as a sign that the United States might support Israeli-Turkish joint energy projects.

The energy issue is sensitive for Israel because of the trilateral security alliance it has formed over the past few years with Greece and Cyprus. That being said, the more important issue for Israel during Cavusoglu's visit will be the issue of the ambassadors. Turkey had expelled the Israeli ambassador in 2018, forcing Israel to operate similarly and expel the Turkish head of mission. Reinstating ambassadors would be the ultimate sign that a true rapprochement process is underway.

A 2020 report had suggested that Ankara decided to return its ambassador to Tel Aviv, and was ready to appoint Ufuk Ulutas, chairman of the Center for Strategic Research at the Turkish Foreign Ministry, as its new envoy. Still, since then, full relations have not been reestablished. The very experienced diplomat Irit Lillian has been serving in the past few months as charge d’affaires of the Israeli Embassy in Ankara. Sources in Jerusalem told Al-Monitor that Lillian has been extremely instrumental in reestablishing dialogue channels with her Turkish counterparts at the Turkish Foreign Ministry and at the presidential palace.