With elections slated to take place in the Iraqi Kurdistan Region this fall, opposing political figures have begun to exchange accusations. 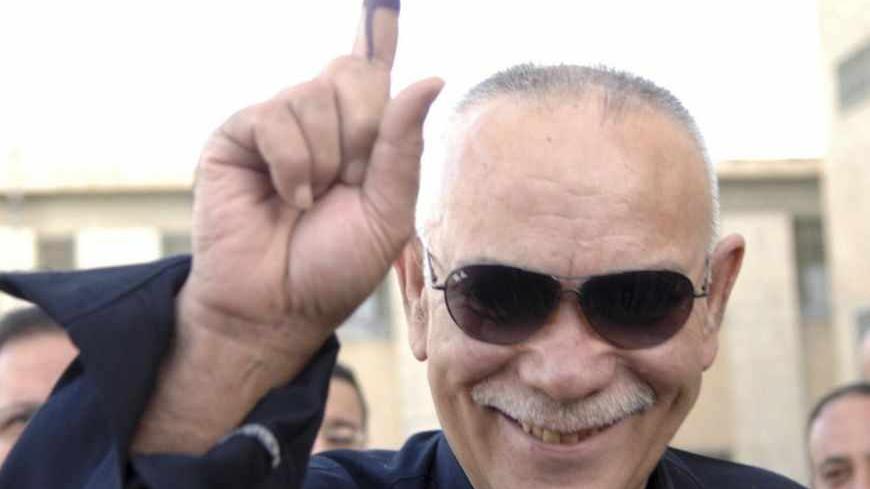 Nawshirwan Mustafa, an Iraqi Kurdish politician and the head of the opposition Movement for Change, shows his ink-stained finger after voting in Sulaimaniyah, March 7, 2010. - REUTERS/Jamal Penjweny

The political situation in the Iraqi Kurdistan Region has been rather foggy with the exchange of accusations of treason and dictatorship between the political parties in the region, mainly by prominent political figures who were until recently fighting under a unified front. The region’s upcoming elections, scheduled for September 2013, justify the escalation of the tone of statements between parties.

Nawshirwan Mustafa, the general coordinator of the Movement for Change and a former leader of the Patriotic Union of Kurdistan (PUK) led by Iraqi President Jalal Talabani, accused Talabani and Iraqi Kurdistan President Massoud Barzani of treason. The latter is a leader in the Kurdistan Democratic Party and a strategic ally of Talabani.

On Tuesday, June 18, Mustafa gave a speech in the presence of his supporters in Kirkuk and Diyala — two areas that are disputed between the Iraqi Kurdistan Region and Baghdad’s federal government, according to Article 140 of the Iraqi Constitution — in which he stated that there had been a golden and historic opportunity for the Kurdish leadership to regain those areas after the fall of the former regime. Unfortunately, the Kurdish political leadership wasted this chance, which has indeed gone down the drain.

Mustafa accused Barzani and Talabani of missing this chance, saying, “The failure to regain the disputed areas was a result of personal and factional interests. Barzani was afraid that the balance of power might turn against him with the return of these regions to Kurdistan and the participation of their representatives in the Kurdish parliament in a way that favors the PUK. This would not be in line with his interests and undermines his power. Meanwhile, Talabani wanted to please the Arabs, Turkmen and neighboring countries like Iran and Turkey to support his candidacy for the Iraqi presidency.

Article 140 of the Iraqi Constitution sets forth the following:

First, the executive authority shall undertake the necessary steps to complete the implementation of the requirements of all subparagraphs of Article 58 of the Transitional Administrative Law.

Second, the responsibility placed upon the executive branch of the Iraqi Transitional Government stipulated in Article 58 of the Transitional Administrative Law shall extend and continue to the executive authority elected in accordance with this constitution, provided that it accomplishes complete normalization, conducts a census and concludes with a referendum in Kirkuk and other disputed territories to determine the will of their citizens, by a date not later than Dec. 31, 2007.

Regarding the draft constitution of the Iraqi Kurdistan Region and the political disputes surrounding it, Mustafa said, “Some people are challenging us today and accusing the Movement for Change of not wanting to enforce the Constitution. I would like to note that after the first parliamentary elections in 1992, and during the term of the first parliamentary session presided over by Barzani’s party, three draft constitutions were aborted to please Saddam Hussein, the former Iraqi president toppled by the US-led NATO in 2003 as part of the War of Liberation of Iraq.”

After the 2009 elections, the parliamentary coalitions underwent changes. Talabani and Barzani’s parties won 59 seats, while the opposition — which split from Talabani's party in 2008 — amassed 25 seats. Additionally, the two opposition Islamic parties won nine parliamentary seats out of 111.

He added, “The current draft constitution is a facsimile of the constitution written by Mubarak for Egypt — one that led the country to the shadows. Moreover, the current constitution was written when Egypt, Tunisia, Libya and Yemen were ruled by Mubarak, Ben Ali, Gadhafi and Ali Abdullah Saleh respectively. Bashar al-Assad is leading a stable country and we do not want a constitution that imposes on us a president who resembles a sultan from the middle ages."

The responses of both Barzani and Talabani soon surfaced to describe Mustafa as an ungrateful and disrespectful dictator.

In a statement issued by the KDP on June 19, Mustafa was described as a dictator among the members of his party, and he was accused of wanting to disrupt the draft constitution. Yet, this only increased his popularity after it had decreased.

The statement mentioned that Mustafa must ask himself first what he has achieved for the Kurdish National Liberation Movement, better yet, for his own movement, before attacking the constitution in front of his supporters — something that can only lead to segregation, defamation, regionalism and insults in Kurdish society. Mustafa has so far succeeded in imposing himself, monopolizing decisions and acting as a dictator in front of members and supporters of his party — not an achievement to be proud of.

Moreover, Barzani’s party accused Mustafa of being ungrateful to his comrade Talabani, who is currently receiving treatment in a German hospital. The statement mentioned that “Mustafa has committed huge and unnecessary mistakes against Talabani although he did not have to wrongly accuse him, at a time when Talabani was being treated at the hospital.”

Talabani’s office said on Dec. 18, 2012, that he had had a stroke and was taken to the Baghdad Medical City Hospital. He was later transferred to Germany to continue his treatment.

The response of Talabani’s party to the statements of Mustafa was also filled with criticism, accusing him of twisting historical truths.

The statement noted that “Mustafa twisted historical truths for the sake of electoral mobilization and that his speech insinuated attempts to frame the Kurdish leadership and deal a heavy blow to Talabani and his role.”

Moreover, the statement of Talabani’s party indicated that, before he occupied the position of president during the rule of the governing council on Feb. 9, he used historical evidence and Ottoman maps to prove that Kirkuk, Diyala and Mosul are Kurdish regions. That day was known as the historical defense day, which is still present in the minds of Kurdish people and the public, having stunned all parties.

Moreover, Talabani’s party described Mustafa as a disrespectful person. The statement mentioned, “While Talabani has been out of the country for treatment for months, a political figure in Kurdistan (Mustafa) is falsely accusing him. The best way to respond to the shower of accusations hurled by Mustafa would be to tell him: ‘All standards have gone down the drain, Oh respectful one!’”

Kurdish political analyst Asous Herdi believes that the statements of Talabani’s and Barzani’s parties regarding Mustafa’s speech were emotionally charged and far from objective. Speaking to Al-Monitor, he said, “The reaction to Mustafa’s remarks was emotional and offensive, rather than being a logical reaction [backed] with evidence and addressing the reasons behind it. It spoke to emotions but did not consist of any information.”

He confirmed that “approaching local elections in the Kurdistan region is affecting media debates between political leaders. Yet, the problem is that the two major parties are used to [verbally] attacking their opponents, rather than responding with logic and politics. Moreover, when they feel that the situation is not to their advantage, they resort to emotional reactions and accuse others of disloyalty, which is not new in the Kurdistan region.”

Asked how recalling Talabani and Barzani’s parties’ political history would affect the Kurdistan region’s political future, Herdi said, “Digging into the past is all right if it aims to expose reality, as we believe that the ruling parties claim to be patriotic more than the others. Yet, their recent past shows otherwise. For this reason, when they want to portray themselves as having qualities that are out of character for them, the opposition is more likely to react, and remind them of their history.”

For its part, the Kurdistan Islamic Scholars Union issued a statement on Thursday, June 20, 2013, imploring preachers of mosques in the Kurdistan region not to be carried along by politicians’ statements, urging people to embrace brotherly coexistence, and not to be influenced by the political leaders’ differences.

The union’s statement said, “The Kurdistan Islamic Scholars Union calls on all preachers of mosques, particularly in Friday sermons, to stress fellowship and companionship among citizens, in order to prevent the political differences that are taking place in the Kurdistan region at present from affecting fraternity and familiarity among them.”

The statement added, “Political parties are free to act in order to increase their popularity in society. Yet, as citizens of the Kurdistan region, we are required to carefully act and prevent these conflicts from affecting us or causing enmity and hatred among us.”

The Kurdistan Islamic Scholars Union is a nongovernmental union established in 1970. It includes Muslim scholars with political tendencies toward all Kurdish parties and independents.