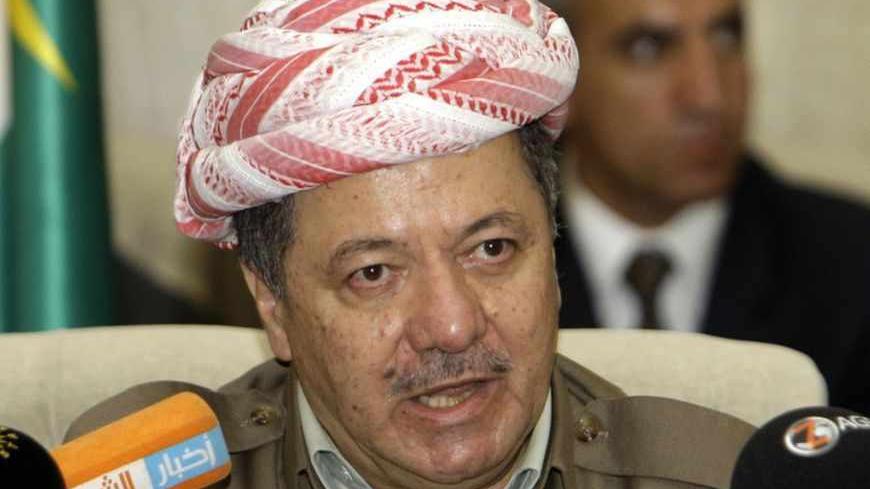 As the clock ticks down toward the upcoming presidential and parliamentary elections in Iraqi Kurdistan, which enjoys near total independence from the central Iraqi government, the names of candidates for the post of provincial president have yet to be announced. Conjecture abounds, though, that competition will be fierce, especially now that the name of Nawshirwan Mustafa, the leader of the opposition Movement for Change, has been proposed to compete against the incumbent, Massoud Barzani.

The province is thus readying itself to hold parliamentary and presidential elections on Sept. 21 this year. Iraqi Kurdistan’s political arena is also witnessing an intense political tug of war; whereby the opposition (which includes the Movement for Change led by Mustafa, who in 2008 defected from the Patriotic Union of Kurdistan headed by Iraqi President Jalal Talabani; the Kurdistan Islamic Union and al-Jama'a al-Islamiyya — the Islamic Association) faces off against the two main parties that currently rule the province, namely the Kurdistan Democratic Party, led by the province’s president, Massoud Barzani, and Talabani’s party.

It would seem that the aforementioned opposition already has concerns that Barzani and Talabani’s parties might be able to find a legal loophole that would allow Barzani’s to extend his time in office for yet another term, and have decided to prepare for that eventuality by submitting the candidature of a strong opponent to Barzani this time around, following the fiasco of 2009 when no serious opponent was fielded.

Article 3 of the law governing the province’s presidency clearly states that the province’s presidency shall be limited to four years, with re-election possible for an additional term. Barzani has already served for two consecutive terms, but members of his party claim that this article will be void once the current contentious constitution, which has yet to be ratified through a referendum, is finally amended.

Article 64 of the same draft constitution also states that “the Kurdistan province’s presidential term in office shall be limited to four years starting on the day that the president is sworn in. The latter may be reelected for a second term in office once this constitution comes into effect.”

In a statement to Al-Monitor, Adnan Othman, an official in the Movement for Change and the movement’s representative in the Kurdistan province’s parliament said: “There are demands from within as well as outside the movement for Nawshirwan Mustafa to submit his candidature to the post of president. But, so far, the subject has not been seriously discussed inside the movement. Furthermore, Mr. Mustafa’s opinion on the matter is not yet known.”

Othman affirms that “competition will be fierce because Mr. Mustafa will only nominate himself if he has a good chance to win. If laws are amended to allow the candidature of Mr. Barzani, then competition between the two will be quite strong.”

Information points to the three main opposition factions holding intense discussions concerning the nomination of a strong contender to the province’s presidency. If they do agree and proceed with their plan, campaigning for these elections will be much more heated than in previous years because Kurdistan’s parties have already announced that each of them will submit individual nominee lists for the upcoming parliamentary elections.

Furthermore, Othman stressed that “it is better for opposition forces to coordinate their efforts, and even agree with non-opposition factions in order to nominate a single individual who would represent them all in the race for the province’s presidency. The lack of coordination will result in opposition and non-opposition votes going to different candidates, which will diminish the chances of any new nominee winning against the incumbent party. It is therefore better to agree on a single name from the Movement for Change or other factions even, not necessarily members of the current opposition.”

Moreover, observers believe that nominating Nawshirwan Mustafa to the post has added benefit considering his status as former member of the Kurdish independence movement which fought against the former Iraqi regime during the 1980s, just as Barzani was [a member]. And, unlike the contenders who competed against Barzani in the 2009 elections, he is of the caliber, and possesses the political heritage necessary to win.

Kurdish political analyst Zurzis Cooley Zadeh told Al-Monitor: “Nawshirwan Mustafa is a person possessing a long political history, and has played a role in the Kurdish independence movement. He is considered one of the founders of the Patriotic Union of Kurdistan, currently led by Talabani. Competition will be fierce if both these men (Barzani and Nawshirwan) are nominated, because they are both endowed with strong popular and political status, and in Nawshirwan’s case, his stature is equally strong within the ranks of the Patriotic Union Movement, which is a strategic partner of Barzani’s party.”

Political analyst Cooley Zadeh pointed out that competition will be even stronger because Nawshirwan, if he chooses to run, is in a position to propose political and economic electoral platforms; while Barzani did not propose any such political programs in the last elections, but contented himself with making certain promises that did not fall within the scope of a specific political or economic platform.

He added: “I think that, in this case, Barzani will submit his own political platforms to counter those proposed by Nawshirwan.”

The president of the Kurdistan province holds the highest executive authority in this northern Iraqi [autonomous] province. He is elected for a four-year term by direct universal and secret suffrage, and is allowed to run for one additional term. For the first time in history, Massoud Barzani was elected by the Kurdistan National Assembly on June 12, 2005, as the first president of the Kurdistan province. He was later reelected for a second term in office through direct secret polling on July 25, 2009.