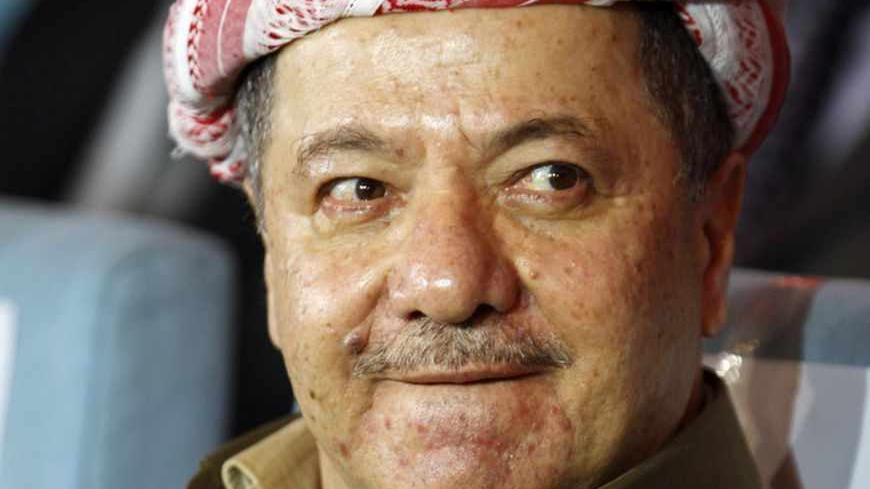 As soon as the president of the Iraqi Kurdistan region, Massoud Barzani, announced last week that he was calling on the Independent High Electoral Commission (IHEC) in Iraq to schedule a date for presidential and parliamentary elections in the Kurdistan Region not later than Sept. 8, the region has witnessed a spike in media disputes that have resembled the early stages of electoral campaigns.

Following Barzani’s announcement, the opposition media noted that this decision came as a result of pressure from opposition parties, alluding to the reluctance of the president to hold the elections on time. Displeased, the president responded, asking the opposition not to talk on behalf of the people of the Kurdistan region and to acknowledge its weight and position on the political map.

“We ask the opposition to be responsible, to acknowledge its weight and the fact that it represents the minority. It has absolutely no right to speak for the people of Kurdistan,” responded the presidency in a statement issued by Omed Sabah, the Kurdistan Regional Presidency spokesman.

The media disputes did not stop at this. Accusations of treason arose, when Adham Barzani, a key member of the Kurdistan Democratic Party (KDP) led by his cousin [Massoud Barzani], accused the former secretary general of the Kurdistan Islamic Union (KIU), Sheik Salah al-Din Muhammad Baha al-Din, of spying for another regional country. Baha al-Din, in his turn, announced that he would file a lawsuit against Barzani.

These media skirmishes came after the Kurdish Lvin magazine published in its last issue an interview with Baha al-Din, in which he said that “this presidential term has been the worst throughout the political and historical career of Barzani.” The statement enraged Barzani’s party and supporters.

Jotiar Adel, an academic from the Sarnaj Center for Research, Strategic Studies and Statistics in Iraq’s Kurdistan Region, said that these media disputes and exchanges of accusations are the fruit of fear. Political parties are concerned that the political map will be modified post-elections.

“Tensions are heightened in regard to crafting the new political map in the upcoming event,” Adel added in a statement to Al-Monitor.

The two main parties of the region — the Barzani led-KDP and the Patriotic Union of Kurdistan (PUK), led by Iraqi President Jalal Talabani — have announced that they will participate in the upcoming elections on separate lists. This is despite the fact that their strategic alliance, which dates back to 2007, stipulates participation in the local and national elections on the same list.

This decision came after the change that happened in the region following the 2009 regional elections, when the opposition (non-KDP and non-PUK parties) took over one third of parliamentary seats.

After the 2009 elections, the parliamentary coalitions underwent changes. Talabani and Barzani’s parties won 59 seats, while the opposition — which split from Talabani's party in 2008 — amassed 25 seats. Additionally, the two opposition Islamic parties won nine parliamentary seats out of 111, which led Barzani and Talabani to reconsider their political calculations and the form of participation in the next elections.

Adel notes the concern of some parties about the prospective alliances that are still blurred. “I expect to see changes, yet not as significant as the tensions. The two main parties are committed to their strategic alliance, which became starker when the PUK supported the KDP’s stance regarding the presidency issue,” Adel added.

He continued, “I believe that changes will take place within the opposition parties, notably the Movement for Change, which will participate on a separate list, while Islamic powers and movements are striving to unite under the umbrella of one list.”

Gergeis Koli Zada, a political analyst and journalist, believes that these media disputes are a normal occurrence between opposition and ruling parties, as long as the presidency is stepping aside.

Zada reiterated that this “media dispute will usher in media tensions and an exchange of accusations.”

It is worthy to note that the first elections in the Iraqi Kurdistan Region took place in 1992, after the region became semi-independent from Baghdad in 1991. At the time, Barzani and Talabani’s parties won all of the seats in parliament by equal shares, with the exception of five seats that went to the Assyrian coalition. This parity,  however,  resulted in the postponement of elections until 2005.

Correction: A previous version of this article incorrectly stated that the opposition had split from Barzani's party in 2008 instead of Talabani's. The error has been corrected.