Differences between the Kurdistan Democratic Party and the Patriotic Union of Kurdistan are coming to the surface, Abdel Hamid Zebari writes. 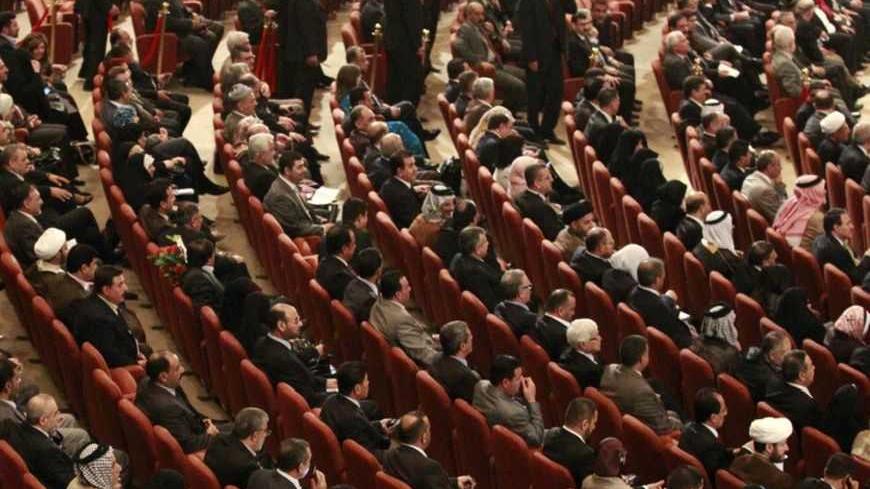 Members of the new Iraqi Parliament attend a session at the Parliament headquarters in Baghdad, Nov. 11, 2010, after a power-sharing agreement brought Kurds into the government. - REUTERS/Thaier al-Sudani

In the Kurdistan region of Iraq, there is a strategic alliance between the two main parties: the Kurdistan Democratic Party (KDP) led by the Kurdistan region’s president Massoud Barzani and the Patriotic Union of Kurdistan (PUK) led by Iraqi President Jalal Talabani. But the results of the Iraqi 2010 elections changed to some extent the balance of power between the two parties, even though the Kurdish leaders have not admitted that. Nevertheless, this change in the balance of power has begun to come to the surface as the country approaches new elections.

In the 2005 Iraqi provincial elections, the KDP and the PUK participated on separate lists, but for the Iraqi and Kurdistan parliamentary elections, which also happened in 2005, they were on a joint list.

On July 27, 2007, the two parties signed a strategic agreement after a long conflict between them. They agreed to equally split between them everything they get to control in the Baghdad government and the Kurdistan region. They also agreed to be on a joint list in the general and local elections.

What changed the balance of power between the two allies is the emergence of a strong Kurdish opposition lead by the Movement for Change. That movement is headed by Kurdish leader Nawshirwan Mustafa, who had split from the PUK. That split clearly affected the results of the 2010 Iraqi parliamentary elections where — under the open list — the KDP won 32 seats and the PUK 10 seats. As a result, some PUK members called for reconsidering the agreement with the KDP.

In the 2010 elections, the Higher Independent Commission in Iraq adopted the “open list” rather than the “closed list” system, thus forcing the KDP and PUK to participate together but on separate lists. The KDP won most of the Kurdish alliance’s seats but was forced to equally split with the PUK the seats reserved for the Kurds in the Iraqi government, in accordance with their strategic agreement.

The issue of reconsidering that agreement has been looming for a while. A series of meetings were held for that purpose between the two parties after voices in both parties demanded that. KDP members, who are the majority, think that they have taken less than their fair share while PUK members think that election results are not an accurate measure of popularity.

PUK Spokesman Azad Jundiyani clearly stated that members of his party are being subjected to psychological warfare, which he considered an electoral campaign to demoralize them before the election.

In an article he published on a PUK media outlet, he said, “It is no secret that the KDP-PUK relations, in light of their strategic agreement, are passing through a sensitive phase. That political debate has been reported in the media and I see no need to deny it because we can no longer hide it.”

According to Jundiyani, it is clear that the political debate started after the 2009 provincial elections, after the emergence of the opposition movement in 2010, and after the PUK failed to secure an equal number of seats as the KDP.

Some KDP members said that the PUK has become the third force in the Kurdistan region, after the KDP and the Change Movement. Those claims have unsettled PUK members.

Jindiyani said, “This is a psychological campaign being conducted against the PUK and it is having an effect.” Dr. Barham Salih, deputy secretary-general of the PUK, clearly and publicly said that the PUK cannot withstand being a minor force.

In a news release, Mirani said, “All of the agreement’s terms were written by Talabani,” which he described as a political and legal person, stressing that his party’s commitment to this agreement is a moral duty.

It appears that the implications of these differences can no longer be hidden, and are no longer restricted locally to the Kurdistan region, especially during the current political crisis and the recall of the Kurdish ministers to the province  to consult about resigning from Prime Minister Nouri al-Maliki’s government.

The Kurdish ministers left Baghdad and returned to the Kurdish region after the Iraqi Parliament approved the budget despite the Kurdistan Alliance’s boycott. The Alliance boycotted because the budget excluded the dues of foreign oil companies operating in the Kurdistan region. Those dues amount to about $4 billion.

Observers point out that the Kurdish leadership has left the doors open for consultation so as not to take a decisive decision, because there are hidden differences between the KDP and PUK with regard to this matter. Some think that the PUK does not wish to pull out the Kurdish ministers from the Iraqi government.

During the recent meeting grouping Barzani, Kurdish ministers and deputies, KDP members, and Talabani, no decision about withdrawing Kurdish ministers from the Maliki government was made. They decided to continue consultations until they reach a final agreement in this regard.