The presidential elections in the Iraqi Kurdistan Region, scheduled for later this year, have hit a snag, with several parties unable to agree on important issues, reports Abdel Hamid Zebari. 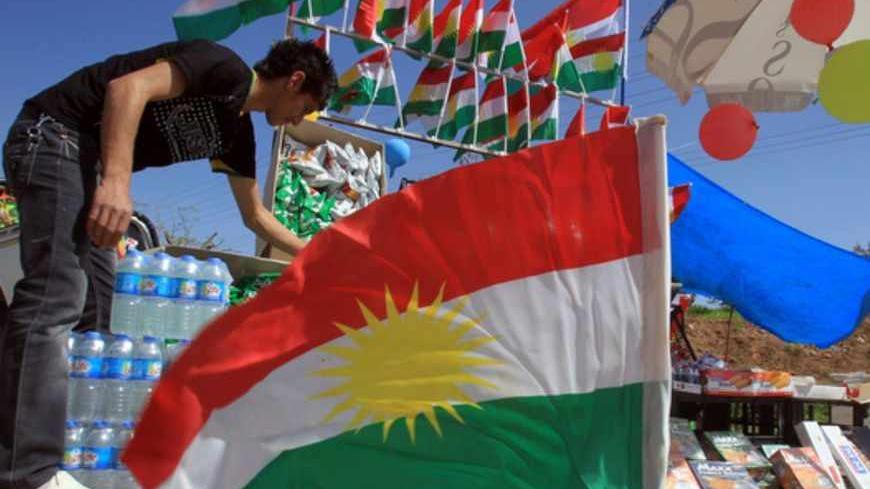 An Iraqi Kurdish street vendor sells Kurdish flags in Erbil, about 300 kilometers northeast of Baghdad, as people commemorate those who were killed in the 1988 Anfal massacre on March 15, 2013. - Ali al-Saadi/AFP/Getty Images

The Iraqi Kurdistan Region is preparing to hold a new round of elections in the upcoming summer amid demands to extend the presidential term by another year or two. In recent days, prominent leaders in the main two parties — the Kurdistan Democratic Party (KDP), led by the region’s Prime Minister Massoud Barzani, and Iraqi President Jalal Talabani’s Patriotic Union of Kurdistan (PUK) — have visited opposition parties to discuss the readiness of the region to hold presidential, parliamentary and provincial elections.

The opposition announced that the main focus of the visits was to reach unanimity over extending the presidential term for a year or two.

The three parties of the Kurdish opposition — the Movement for Change, the Islamic Group in Kurdistan and the Kurdistan Islamic Union — hold 34 parliamentary seats out of 111. Barzani and Talabani’s parties enjoy the lion’s share with 59 seats, leaving the rest to non-Kurds and minor parties such as the Kurdistan Communist Party, the Kurdistan Socialist Democratic Party and the Kurdistan Toilers' Party.

The most recent parliamentary and presidential elections for the region were held in the summer of 2009, under the provision that the next elections would be held by the upcoming summer at the latest. Provincial elections, on the other hand, were last held in 2005 on account of conflicts between the authorities and the opposition over the electoral law.

In the past few days, Fadel Mirani, general secretary of the KDP, and Mala Bakhtiar, head of the PUK’s political bureau, have met with opposition leaders in the region, including Nechirvan Mustafa, Mohammad Faraj and Ali Babir. Additionally, the two main parties led by Barzani and Talabani have held bilateral meetings.

The two parties issued a media release following the meetings, announcing that “the opposition powers have welcomed our suggestions to solve the existing issues, including that of the presidential term, and will get back to us with their stances.”

In a statement to Al-Monitor, Mohammad Tofiq Rahim, a prominent figure in the Movement for Change and the movement’s foreign-relations chief, said, “We are against extending the presidential term; elections must be held on time.” He continued, “Our stance is clear and will not change.”

Deputy Secretary-General of the Kurdistan Islamic Union Salah al-Din Babkir said that the party will not announce its stance prior to the meeting of opposition powers. He added, “We will hold a meeting and look into the suggestion of extending the presidential term that was presented to us by the KDP and the PUK. We will announce our stance with the opposition powers.”

Amar Qadir, head of the Islamic Group in Kurdistan’s parliamentary bloc, reiterated the necessity of holding the elections on time, saying that “political disputes and agreements should not lead to postponement, which only results in political destabilization.”

Speaking of Barzani and Talabani’s suggestion, Qadir added, “We will talk about our stance next week, after agreeing as opposition powers and officially announcing our position regarding the presidential elections.”

Observers believe that the disparities in the Kurdish opposition’s stance are putting pressure on the ruling parties to agree to compromises pertaining to political and administrative reforms in the governmental institutions of the region.

Kurdish political analyst and journalist Asos Hardi relayed his impressions to Al-Monitor: “I believe that opposition parties are well aware that the ruling parties will carry out the extension of term; therefore, they are fishing for compromises in exchange for their approval on the extension, which is, at the end of the day, indisputable. I believe this is the reason why they have put their response to the ruling parties on hold. They wish to meticulously study all the aspects of this issue.”

Opposition powers are demanding the amendment be reversed so that the parliament elects the president again. Additionally, they are seeking to put power in the hands of the parliament instead of the president, who enjoys broad powers and is not subjected to parliamentary supervision. Barzani’s party, however, vigorously objects to such a demand.

Hardi believes that Talabani’s approval of extending the presidential terms is the result of finding himself in a delicate position with Barzani’s party.

“The PUK decided to run for elections on a separate list, despite the strategic alliance it had with Barzani’s party. Thus, in order to spare the PUK the embarrassment of asking its members and supporters to vote for their separate list in parliamentary elections and for Barzani in presidential elections, it does not object to the extension of the presidential term, because it is, in both cases, in a delicate position.”

According to the draft constitution of the Iraqi Kurdistan Region — a draft that has not yet been put to a referendum to become effective, even though the parliament ratified it in 2009 — the president can be elected for a second four-year term as of the date the constitution enters into force.

In this case, Barzani can take office for two terms if he runs for the second, a scenario vehemently opposed by the opposition powers.

Regarding this, civil activist Hoker Jeto said to Al-Monitor that “the draft constitution has given the president the right to be elected for two terms. The issue of the constitution and referendum is thorny, since the opposition objects to the draft and demands amendments so as to make the system parliamentary rather than presidential.”

Jeto continues, “In both cases, we should adhere to democracy because the president and other officials will, at some point, leave their posts whether we like it or not. We should respect the people’s will and the peaceful transfer of power. There are many key posts, and the president can play an important role if he assumes it.”