Negotiations continue on a draft new constitution for the Kurdistan Region of Iraq which would have the president be selected by the parliament, rather than directly elected by the people, reports Abdel Hamid Zebari. 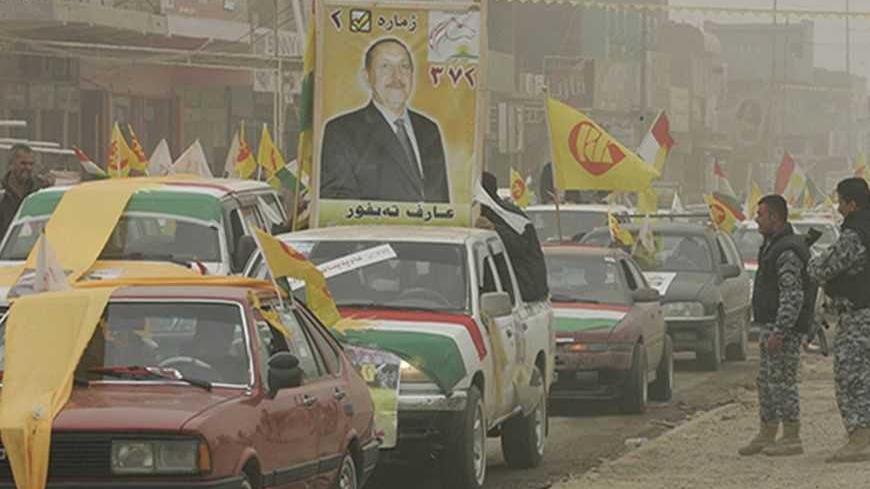 Iraqi policemen look at supporters waving semi-autonomous region of Kurdistan and KDP flags during a sand storm at a rally ahead of March 7 parliamentarian elections in Kirkuk, February 23, 2010 - REUTERS/Ako Rasheed

Iraqi Kurdistan, a semi-independent autonomous region since 1992, has been seeking an endorsement of its constitution for seven years now. Political differences between the ruling and opposition parties, however, have prevented the draft constitution from being put to a referendum after the regional parliament approved the draft in 2009.

The Kurdish region elected a parliament and formed a government independent of Baghdad in 1992. This was done under the protection of the international coalition that was formed to drive the regime of former Iraqi President Saddam Hussein out of Kuwait in 1991. Since Hussein's overthrow in 2003, Iraqi Kurds have participated in developing Iraq's political process and in the writing its federal constitution. Although this constitution provides for a federal region, the two sides have yet to agree on a special constitution for the region of Kurdistan.

The draft Kurdistan constitution consists of 122 articles, and the project has been in the works for nearly seven years.

However, the rise of political opposition since the 2009 elections has prevented the two main parties — the Kurdistan Democratic Party (KDP), led by President of Kurdistan Region Massoud Barzani, and the Patriotic Union of Kurdistan (PUK), led by Iraqi president Jalal Talabani — from holding a referendum on the draft. In the 2009 elections, three Iraqi Kurdish opposition forces won seats in the Iraqi Kurdistan Parliament (IKP): the Movement for Change won 25 seats, the Islamic Group (Jamaa Islamiya) four seats, and the Kurdistan Islamic Union six, out of a total of 111 seats.

Opposition forces strongly oppose a referendum on the Kurdistan draft constitution, as it would become effective once approved by a parliamentary majority.

Adnan Othman, a member of the opposition Movement for Change, told Al-Monitor, “The current draft cannot be approved because it would return the Kurdistan region to the dark ages and pave the way for authoritarian rule.”

The opposition Change Bloc demands that the draft constitution be returned to the IKP to be studied by a special committee. This demand stems from objections to the extensive powers granted to the region's president — currently Barzani — and the system of presidential rule in that government.

He added, "We oppose several issues, including the form of government in Kurdistan, mainly whether it will remain as is, the region’s presidency will have wide powers at the expense of parliament, or if parliament will have a supervisory power over the executive authorities."

According to Article 60 of the proposed constitution, "the President of the Kurdistan Region is the supreme head of the executive authority and general commander of the Peshmerga forces (Regional Guard). He also represents the people of the region, speaks for them in national and nationalist events, and coordinates between federal authorities and regional authorities."

Article 65 of the draft constitution states that the region’s president enjoys powers including issuing laws and decrees legislated by the IKP within 15 days of receiving them. He also has the right to reject them, fully or partially, within that period period and return them to parliament for reconsideration. Parliament's subsequent decision would then be final.

The Kurdish opposition forces presented a bill to the IKP demanding that the ruling system be changed from presidential to parliamentary, and that the presidential post be an honorary one.

Abdullah Mullah Nouri, a member of the opposition Movement for Change and initiator of the draft, said that the system of governance proposed by the opposition's draft would involve significant changes.

He added, "The president of the region would be selected by parliament, unlike the old law according to which the president was elected directly by the people." He also noted that "the system would be a parliamentary one, and that the person to head the Kurdistan Region would have to abandon partisan positions and responsibilities and hold an honorary post."

The current Kurdish president, Barzani, is also the leader of the Kurdistan Democratic Party. Nechirvan Barzani, the head of the provincial government belongs to the same party.

Nouri expressed fear that a new dictatorship would be established in the region if the broad powers proposed in the other constitution were granted to the region's president. That draft has been put forth by parties linked to the current authorities.

"The experiences of neighboring countries have shown that the presidential system is inconsistent with the present reality and creates dictatorships. We in the Kurdistan region have the same fears," he said.

On the other hand, Barzani’s party — the Kurdistan Democratic Party — insists that the draft constitution not be returned to parliament for further edits.

Abdul Salam Berwari, a KDP member in the IKP, says that “returning the draft constitution to parliament is illegal, and is a procedure that undermines the legitimacy of everything parliament is doing."

A meeting was held last Thursday [Jan. 17] in Erbil between Barzani and the three main opposition leaders: Nawshirwan Mustafa, leader of the Movement for Change, Muhammad Faraj, secretary-general of the Kurdistan Islamic Union, and Ali Baber, the emir of the Islamic Group.

The meeting was held after a year-long hiatus with no talks between opposition leaders and Barzani. Their principle disagreements concerned reforms in the system of governance and the draft constitution.

Mohammad Hakim, a spokesman for the Islamist Group in the Kurdistan Region, said that the opposition leaders confirmed in their meeting with Barzani their demands for reform, including the need to refer the draft constitution back to parliament, and that the political system be a parliamentary rather than a presidential system like Baghdad's.

Abdel Hamid Zebari is a contributing writer for Al-Monitor’s Iraq Pulse. A reporter from Erbil who works in the field of print journalism and radio, he has published several reports in local and world media, including Agence France Press and Radio Free Iraq (Radio Free Europe).