After 10 Years of Iraqi Conflict, Only Kurds Emerge as Winners

The Kurds of Iraq have been one of the few unequivocal winners from the U.S.-led invasion of 2003, with a greater role in politics and a burgeoning economy, writes Abdel Hamid Zebari. 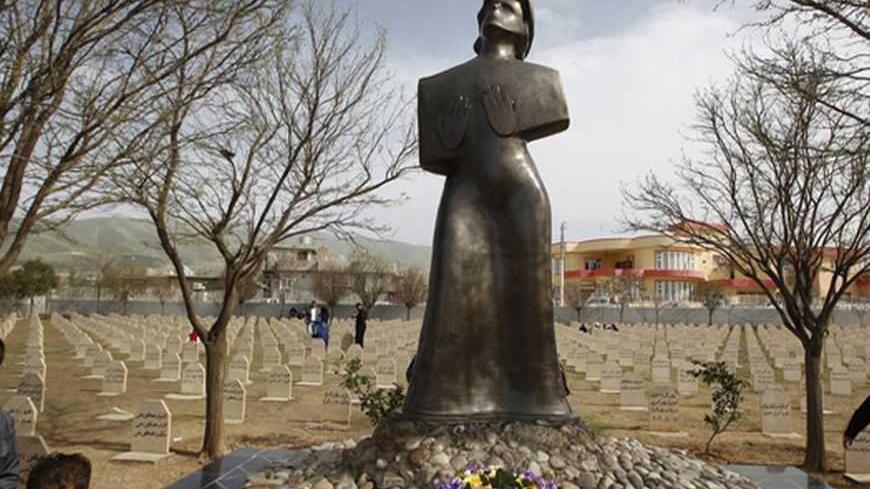 A memorial for victims of the 1988 chemical attack is pictured at the cemetery for the victims in the Kurdish town of Halabja, near Sulaymaniyah, 260 km (160 miles) northeast of Baghdad, March 16, 2013. - REUTERS/Thaier al-Sudani

The conflict between Iraqi Kurds and the government in Baghdad has persisted over several stages. Throughout the 20th century, the Kurds did not stop asking for their right to self-determination, in terms of an equal identity in Iraq and recognition of their own language, history and culture. The year 2003, however, marked the start of another stage, one that liberated them from the shackles of the century that reached the peak of its harshness during the rule of former President Saddam Hussein.

Evidently, the Iraqi Kurds benefited the most from the fall of the former Iraqi regime that was led by Hussein’s Socialist Arab Baath Party. Hussein used to deal with the Kurds as a function of his interests. He kept them under internal siege for more than 12 years, in addition to the international blockade that was imposed over Iraq as a whole.

In 1991, the Kurds freed themselves from the grip of Hussein’s regime in a coup known as the Kurdistan Spring 1991. Then, the Iraqi dictator lost in the second Gulf War and the International Coalition Forces declared the three Kurdish cities no-fly zones. Subsequently, Hussein withdrew his governmental administrations, believing that the cities would not be able to govern themselves.

Throughout his 35-year rule, Hussein’s policies led to large-scale wars. These include the first Gulf War against Iran, which lasted eight years, and the war of occupation of Kuwait in 1991, also known as the second Gulf War. Hussein returned defeated from both wars, and he caused Iraq huge political and economic damage.

As soon as Hussein withdrew his administrations from Kurdistan’s three cities — Erbil, Sulaymaniyah and Dohuk — the Kurdish parties, especially the Kurdistan Democratic Party (KDP) led by Massoud Barzani, the current president of the Iraqi Kurdistan Region, and the Patriotic Union of Kurdistan led by current Iraqi President Jalal Talabani, conducted the first legislative elections in Kurdish history. As a result, they formed their own parliament and local government, and governed their affairs autonomously.

Despite the internal divisions and disputes among Kurds during the 1990s, especially between the parties of Barzani and Talabani over the presidency of the region, they were able to organize their administrative affairs and manage the region with financial resources obtained from customs revenues.

Moreover, during the past few years, the Iraqi Kurdistan region has been isolated from the outside world. The international community did not communicate with the region, since the Iraqi government did not recognize Kurdistan; neither did the neighboring countries, the American administration or the British government.

Therefore, the region’s politicians and citizens, who could not even obtain a passport from the Iraqi government, had to travel by land illegally through neighboring countries. It was rare to see foreign politicians or businessmen in the Kurdistan region, and it remained that way until the Iraqi liberation war started.

The fall of Hussein’s former regime and the beginning of a new chapter in Iraq’s history constituted a good opportunity for the Kurds. They used it well and achieved a lot of gains. They now consider themselves strong partners in the political process in the country, although they still have some problems with the current government in Baghdad.

Thanks to the Iraqi liberation war, Talabani has reached the presidency, a Kurdish figure now occupies the post of foreign minister — which is considered one of the political ministries in the country — and the Kurds have obtained guarantees in the Iraqi constitution.

For seven years, Talabani has been the president of Iraq, while Hoshyar Zebari, a leader in Barzani’s party, has been in charge of the Foreign Ministry for eight years. The Kurds lead other ministries in the Iraqi government too, and their region is autonomous.

The current constitution has granted the Kurds numerous rights, such as the right to teach Kurdish alongside Arabic in educational institutions. They are also allowed to form their own police forces in the Kurdistan region.

At the economic level, the Kurdistan region has witnessed significant growth and enormous urban development. This was possible because the region has enjoyed stability, unlike other Iraqi cities, which are struggling with brittle security situations and terrorist attacks that have impeded normal life.

In addition, Kurdish leaders have kept the three Kurdish cities safe from terrorist attacks, which has helped to make the Kurdistan region a political, economic and cultural gateway.

As disputes regarding the oil sector have surfaced in Baghdad, Kurds have been able to strike many oil agreements with major international companies, such as ExxonMobil, Total, Chevron and others.

Kurdish officials confirm that oil has long been a curse, given that former Iraqi regimes used it to acquire weapons and quell the Kurds. Post-2003, the situation has drastically changed and oil has become a cornerstone upon which the Kurdistan region establishes its relationship with the federal government. According to statistics from the Ministry of Natural Resources, the Kurdistan government has to date signed 50 oil contracts with international companies.

The conflict between Baghdad and Erbil over oil contracts that the Iraqi government does not recognize and considers to be null and void is still standing, even though Kurdistan says that the 2005 constitution granted them this right.

Statistics from the General Directorate for Investment in the Kurdistan Region demonstrate that foreign and local investment from Aug. 1, 2001, until Feb. 3, 2014, amounted to $24.5 billion from a total of 521 projects in the three cities of Erbil, Sulaymaniyah and Dohuk.

The Kurdistan regional government started to grant permission for investment projects when a 2006 investment law came into force. According to the latest government figures, 2,400 foreign companies are registered in the region’s records.

The construction campaign has ushered in 8,500 new residential units, in addition to tourist projects (five-star hotels), health projects (hospitals), and a significant number of industrial, agricultural and financial projects.

On the cultural level, choosing Erbil as the 2014 Arab Tourism Capital was one of the most important events in the last 10 years.

This initiative came as a result of the urban development that has occurred in the Kurdistan region on all levels, particularly in the tourism sector. Over the past few years, the Iraqi Kurdistan region has witnessed the arrival of millions of tourists from Iraq and neighboring countries, in addition to visitors from Europe and the United States.

Mahmoud Outhman, a Kurdish MP and former member of the Coalition Provisional Authority, said that “the Kurds have reaped many benefits after the fall of the regime, notably the recognition of their rights and the political agreements they concluded.”