Sudan to hand over Bashir to International Criminal Court

In a move welcomed by the international community, the transitional government of Sudan agreed to hand over Omar al-Bashir and his aides to the ICC in The Hague. 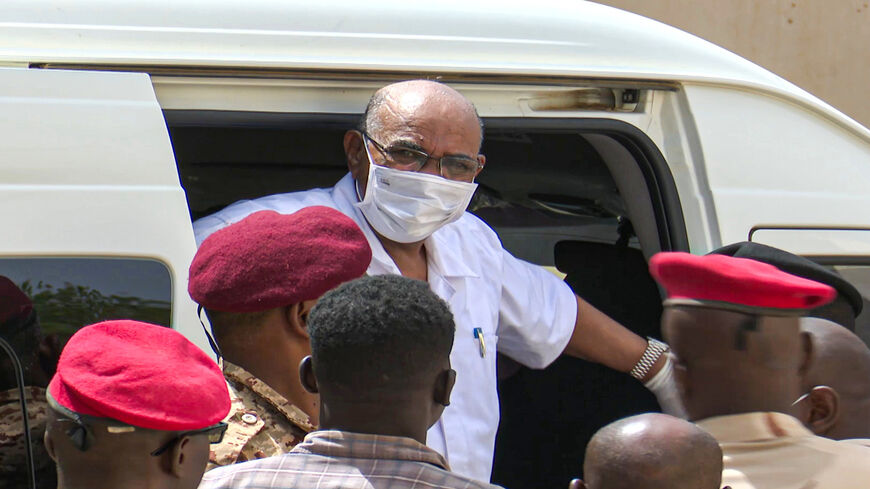 This AFPTV screenshot from footage aired July 21, 2020, shows Sudan's ousted President Omar al-Bashir disembarking from a vehicle upon arriving at the courthouse to attend his trial along with 27 other co-accused, in the capital Khartoum, Sudan. - Mohammed Abuamrain/AFPTV/AFP via Getty Images

Ayman Salameh, a professor of public international law, explained Khartoum’s decision to extradite Bashir by saying that the ICC had exercised its jurisdiction in prosecuting Bashir, among others, based on United Nations Security Council Resolution No. 1593 issued in 2005.

Salameh told Al-Monitor that the UNSC referred in advance, under Chapter VII of the Charter of the United Nations, the “Darfur” crisis to the ICC Prosecutor after the International Commission of Inquiry of the ICC, which was sent to Darfur in November 2004, issued a report referring the Darfur file to the ICC Prosecutor. The report, he noted, established that Bashir and his aides committed war crimes, genocide and crimes against humanity in the Darfur region.

Salameh added that presidents, prime ministers, ministers and other officials do not enjoy immunity from prosecution before the ICC, as the Rome Statute, the ICC’s founding system, applies to all persons accused of committing crimes that pose a great threat to the international community.

These crimes include crimes of aggression, genocide and crimes against humanity, and any immunity enjoyed by an official in their country does not prevent them from being prosecuted before the court in The Hague. Article 27 of the Rome Statute expressly states that heads of state do not enjoy immunity from prosecution.

The decision to extradite Bashir, who ruled Sudan from 1989 for three decades and was overthrown in April 2019, came after a popular uprising.

Bashir is currently in the Kober Prison of the capital along with his aides, after the Cabinet approved last week the Rome Statute of the ICC, which had previously issued an arrest warrant against Bashir and his aides in 2009, accusing him of committing war crimes and crimes against humanity during the armed conflict that erupted in Darfur in 2003, and that led to the killing of nearly 300,000 people by Bashir’s forces and the displacement of nearly 3 million citizens.

According to Salameh, handing over the accused to the ICC is urgent for the Darfurians in order to settle the Darfur peace file, and it is an important step taken by the transitional government in order to strengthen Khartoum’s credibility before the international community.

Regarding his position on those opposing the handing over of Bashir to the ICC on the grounds that this is a violation of the principle of sovereignty, Salameh said that it has been proven that the Sudanese government is not interested and unwilling to prosecute those accused of war crimes in Darfur.

Sudan, he continued, is unable to conduct such trials. The legislation in Khartoum does not cover all serious violations of international law, so how can the Sudanese court try these crimes in the absence of national legislation for war crimes, genocide and ethnic crimes.

Salameh noted that Khartoum needs to make amendments to all legislations, including war crimes, and the judicial cadres in Khartoum must be qualified to undertake investigations into such major crimes, which they are not currently.

He also said that from a security and political standpoint, it is difficult to prosecute them within Sudan, as there are Muslim Brotherhood currents from the opposition that refuse to try Bashir and his aides.

ICC Prosecutor Karim Asad Khan, who took office in June, arrived in Sudan Aug. 9 on a visit during which he met with several officials in Khartoum in order to discuss the ICC work.

He declared that he is charged with conducting independent investigations on the events that took place in Darfur. He stressed that he will visit Darfur in November to meet the families of the victims before submitting a report to the Security Council in December. He called on the Sudanese to further cooperate.

Asked about the location of the trial of Bashir and his aides, Khan commented by saying that the ICC is headquartered in The Hague, but if the judges believe that the trial should take place elsewhere, then this is up to them.

Legal jurist Kamal Younes told Al-Monitor that the decision to extradite Bashir and his aides is related to the crimes committed by Bashir’s regime against the Darfur region. He said that the ICC had previously accused Bashir and his aides of committing war crimes, genocide and ethnic crimes.

He noted that if those crimes were proven, Bashir and his aides would receive deterrent penalties, just like former Bosnian Serb leader Radovan Karadzic was sentenced to life imprisonment.

The decision to extradite Bashir sparked great controversy on social media in Khartoum and some Arab and foreign countries, as some Twitter users welcomed the move and described the decision as an advanced step in holding to account those involved in the Darfur region crimes, while others deemed it as a violation of the principle of sovereignty and argued that Bashir should have been tried inside Khartoum.

Younes added that the ICC either considers major cases related to war crimes or cases that the local judiciary is unable to address. Given that Prime Minister Abdalla Hamdok ratified the Rome Statute, the court shall be applying its regulations to Sudan. Such regulations, he said, shall apply to those referred to the ICC, and the court may require any country to cooperate with it even if it is not a member thereof when war crimes and genocide are committed on its land.

The United States was happy with the decision and described it as an advanced step in punishing criminals, spokesman for the US State Department Ned Price said.

Former Egyptian Ambassador to Khartoum Mohammed al-Shazly told Al-Monitor that Bashir committed many crimes against the Sudanese people — war crimes and genocide on the part of his forces and financial corruption crimes — hence the need to try him and his aides in order for justice to take its course.

Regarding Sudan’s decision to hand over Bashir and his aides to the ICC, Shazly said that the Juba Peace Agreement stipulated the need to work on handing over those wanted in Khartoum to the ICC, but this decision contradicts the principle of sovereignty, as Bashir committed crimes on the land of Sudan against the Sudanese people. Therefore, it was necessary for the current Sudanese government to expedite the trial of Bashir inside Sudan out of respect for the principle of sovereignty.