Nearly 25 years after the Iraqi Kurdish city of Halabja was attacked with chemical weapons, the Kurdistan Regional Government continues to seek international recognition of the Anfal as genocide, reports Abdel Hamid Zebari. 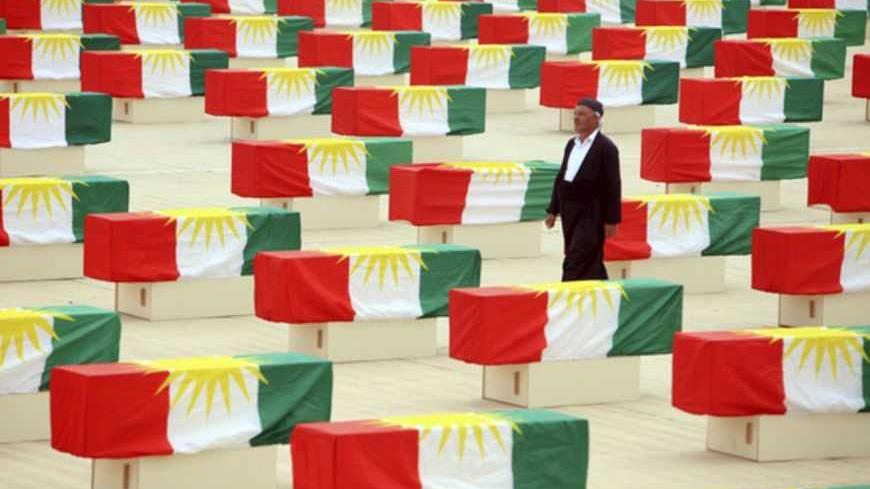 A Kurdish man walks between coffins draped with Kurdish flag containing the remains of victims during a burial ceremony in Sulaimaniya, 260km (162 miles) northeast of Baghdad, May 28, 2012. More than 700 Kurds, killed by former Iraqi leader Saddam Hussein, were honoured in a ceremony in northern Iraq. - REUTERS

Late last month, the British parliament recognized the genocide committed against the Kurdish population under the former Iraqi regime. This recognition was widely welcomed by Iraq’s Kurdish parties, which seek to gain complete international recognition for the genocide.

In December 2012, the Swedish parliament did the same and acknowledged that the Anfal Campaign amounted to genocide against Iraqi Kurds.

Kurdish efforts to gain international recognition of the massacres against them at the hands of Saddam Hussein's regime date back to early 2008. At the time, Iraq’s parliament recognized the Anfal Campaign carried out by Iraqi forces in 1988  as an act of genocide against the Kurds.

Erbil, the largest city and the capital of Iraq’s Kurdistan region, hosted an international conference in 2008 to inform the world of the genocide against the Kurdish people.

The conference issued a set of recommendations, which included the formation of a special committee that consists of the friends of Kurds in the West, in order to contact decision-making centers in the world such as the United Nations, the European Union (EU), the EU parliament, parliaments of foreign countries, the International Criminal Court in The Hague, and organizations and centers for genocide. It also sought to involve them in efforts to explain to the world that the Anfal crimes amount to genocide.

Kurdish officials repeatedly say that the Kurdish population in Iraq will not feel safe unless the issue gains international attention, to ensure that it is not repeated.

The recognition of the genocide by the British parliament came amid a campaign to gather electronic signatures. The campaign, in which more than 27,600 British citizens participated, was led by the British Kurdish MP Nadhim Zahawi, who called on the British government to discuss and assess the issue of genocide and reveal the truth about these crimes against the Kurds.

Local authorities in Kurdistan consider the British parliament’s recognition of the genocide against Kurds to be important. Iraqi Kurdistan’s Prime Minister Nechirvan Barzani welcomed the British Parliament’s decision, and added in a statement: “This will inspire our friends and friends of human rights and freedom in other countries to do the same. We must all stand together against tyranny, wherever it may appear.”

Aram Ahmed, minister for martyrs and Anfal affairs in the Kurdistan Regional Government (KRG), told Al-Monitor: “It is an important step for us, because Britain is one of the greatest countries in the world and had assumed a major role in drawing the political and economic map of the region,” in reference to the post-World War I period.

This year marks the 25th anniversary of the chemical weapons attack on the Kurdish city of Halabja on the Iraqi-Iranian border at the hands of the former Iraqi regime, killing 5,000 people. For this occasion, the KRG has organized this year a broad campaign to commemorate this anniversary under the slogan of “From Tears to Hope”.

Ahmed said: “We will carry on, so that this occasion gains international resonance and succeeds in raising international awareness about the genocide.”

He added: “Awareness campaigns about the genocide have taken advanced steps, but major efforts are still needed. We have to work together in order to bring it to the attention of the world that this people wants to develop itself, wants peace to prevail in the region, and wants to be a center for the region’s renaissance and development.”

The Kurdish minister added, “We have come a long way, but we still have much to do."

According to Iraqi Kurdish sources, the genocide operations committed by the former regime of Saddam Hussein started in 1979, when the Faili Kurds in Baghdad, Khanaqin and other areas were executed. In 1983, another campaign of mass killing took place against the Barzani tribe, to which the president of Iraqi Kurdistan Massoud Barzani belongs, killing more than 8,000 people, whose ages ranged from 12 to 45.

In 1987 the former regime bombarded the villages of Sheikh Wasan and Balisan in Erbil with chemical weapons, killing thousands of civilians residing in these areas and villages. In 1988, the regime attacked the city of Halabja with chemical weapons, killing 5,000 women, children and elderly. In the same year, the Anfal campaign was carried out, killing 182,000 people and destroying 4,000 Kurdish villages, according to Kurdish sources.

On June 24, 2007, the Supreme Iraqi Criminal Tribunal found five people guilty of genocide, crimes against humanity and war crimes in the Anfal campaign, while it acquitted one defendant.

Ali Hassan al-Majid is one of the six officials who were tried. He went by several nicknames, such as the butcher of Kurdistan and Chemical Ali. He was convicted of genocide and executed by hanging in early 2010.