There are growing calls domestically and internationally for the Palestinians to join the International Criminal Court. 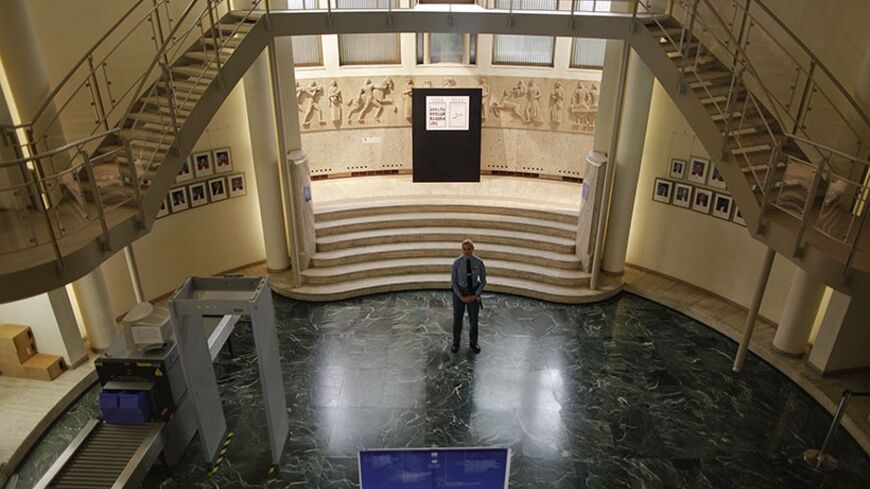 An armed security guard is seen at the International Criminal Court in The Hague, Sept. 20, 2011. - REUTERS/Damir Sagolj

Since the breakdown of Palestinian-Israeli negotiations and the reconciliation agreement between the West Bank and Gaza leaderships, Palestinians have been considering an important question: Will the Palestine Liberation Organization (PLO) apply to join the International Criminal Court (ICC), and when would be the right time to do so?

Luis Moreno-Ocampo, former chief ICC prosecutor, has said that UN recognition of Palestine as a non-member observer state has changed Palestinians' legal status vis-a-vis The Hague-based court. In a May 12 interview with Al-Monitor, Moreno-Ocampo encouraged the Palestinians to join the ICC. He said, “The presence of the ICC in the region will encourage the sides to think creatively about how to solve their problems in their bilateral relations.”

While Palestine can legally join the international court, it is not clear that it wishes to do so, especially considering the possible reactions by the Israelis who might face trial for war crimes if the process is completed. On the other hand, given the experience of previous years, Palestinians are now convinced that even if Israel and the United States scream and shout about such a move, it is unlikely to turn the tables on the Palestinians for taking this nonviolent action. Similar threats were made when the PLO asked the United Nations for recognition and when it recently approved the reconciliation with Hamas.

Pressure to join the ICC is not only coming from Palestinians, but also from major international human rights organizations, 17 of which, including Amnesty International and Human Rights Watch, have called on Palestinian President Mahmoud Abbas to join the court. In a May 8 statement, they noted that if the state of Palestine "signed up to the Rome Statute of the ICC, the Court would have jurisdiction over war crimes and crimes against humanity committed on Palestinian territories and by its nationals elsewhere."

Camille Mansour, a former adviser to the Palestinian negotiating team and now a professor at the Universities of Paris and Versailles, cautioned against acting hastily. According to Mansour, a Palestinian expert on international law and negotiations, the opening of Gaza to Abbas and preparation for elections should take precedent over any other issue.

Mansour told Al-Monitor, “I think the priority now is forming the government of technocrats. This should open the stage for new rules of the game.” He also suggested that resuming negotiations, along with establishing the timing and conditions for joining the ICC, should wait until after the implementation of the basic steps of reconciliation and government formation.

Lamis K. Andoni, a leading Palestinian analyst, dismissed the timing issue as irrelevant. In a phone interview with Al-Monitor, Andoni, who resides in London, said, “I think no time is the wrong time [to join the ICC]. Palestinians have to pursue [it] to make Israel accountable for its occupation and crimes.” Andoni referred to joining the ICC as a nonviolent and legal form of resistance. He said, “Israel might have the backing of the Americans and their military force, but Palestinians have international law on their side.”

Andoni also argued that the situation might have been different if the Israelis had shown goodwill on the ground, but, he said, “Israel has not shown any intent to end its occupation, rendering peace negotiations meaningless.”

Jamal Nazzal, a Fatah spokesman and member of its Revolutionary Council, echoed similar sentiments in an interview with Al-Monitor. “Israel should not bet on impunity while it continues indefinitely to violate Palestinian human rights,” he said. Nazzal dismissed the Israeli assertion that joining the ICC is a red line, stating, “On the contrary, the Palestinian leadership understands that conceding Palestinian rights is the red line.”

The idea of Palestine joining the ICC has not, of course, gone unremarked upon by Israel and the United States. Israeli Prime Minister Benjamin Netanyahu has already said that as a result of the Palestinian reconciliation, the Ramallah-based Palestinian leadership will be held responsible for every rocket shot from Gaza into Israel.

A quickly arranged May 14 meeting between Abbas and US Secretary of State John Kerry in London no doubt touched on the ICC issue. It is not clear whether Abbas held any secret meetings with Israeli Justice Minister Tzipi Livni, who was also in London. British authorities granted Livni diplomatic immunity for the visit, because she and other Israeli ministers could potentially face prosecution for war crimes for actions taken in Gaza in 2008 and 2009.

Israeli officials will be facing much more legal harassment throughout the world if Palestine joins the ICC and pushes ahead to charge Israel with war crimes for the occupation and colonization of Palestinian lands. The big question remains whether the Palestinian leadership will indeed join the ICC or simply wave the threat of joining to gain concessions in the long-unresolved Middle East conflict.