Most PLO factions, and the vast majority of Palestinians, support having the International Criminal Court investigate possible Israeli war crimes in the Gaza Strip. 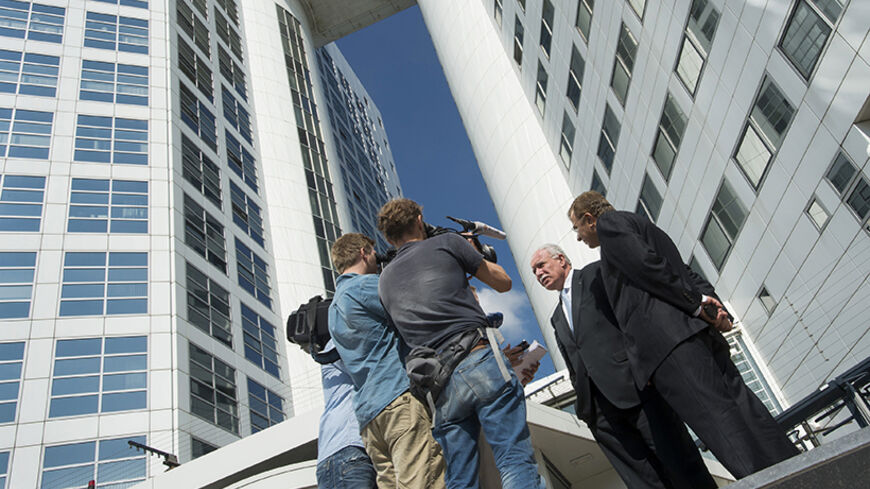 Palestinian Foreign Minister Riad al-Malki (2nd R) speaks to reporters as he leaves the International Criminal Court after his visit to the Hague, Aug. 5, 2014. - REUTERS/Toussaint Kluiters

As the sounds of gunfire in the Gaza Strip begin to cease, international human rights organizations, legal experts and political activists are speaking up about the need for the International Criminal Court (ICC) to investigate whether war crimes were committed during the Gaza conflict this summer.

The ICC, created by means of the 1998 Rome Statute with the aim of prosecuting individuals for war crimes and amended a few times, became legal in 2002. Legal experts and the ICC’s own bylaws say that it is a court of last resort. This means that the ICC will only intervene when a country is found to be unwilling or unable to carry out its own investigation.

At present, neither Israel nor the state of Palestine are members of the ICC. A total of 122 countries have signed up for the Rome Statute, and Jordan is the only Arab country to have done so.

Fayez Abu Eita, a spokesman for the Palestinian Fatah movement, said the Palestinians need an international party to investigate the war crimes committed by Israel in its offensive on Gaza. In a phone interview with Al-Monitor, Abu Eita said that a Palestinian committee has been formed and the issue has been reviewed from all angles with the conclusion that the ICC should be joined. “There is a huge desire among the Palestinian people to hold the Israeli occupiers responsible for the war crimes they committed against Palestinian children, women and senior citizens,” he said.

A significant 80% majority of polled Palestinians approve of joining the Rome Statute of the ICC.

Palestinian Foreign Minister Riyad al-Malki visited the ICC in The Hague on Aug. 5 to lobby for action against Israel over its Gaza actions. Although Malki said the Palestinians plan to formally join the ICC, it was unclear what the aim of the visit was. It is possible that his visit was aimed at convincing the ICC’s prosecutor to initiate an investigation into the violence in Gaza.

Speaking to reporters after his meeting, Malki pointed clearly to the fact that documented war crimes were committed in Gaza. "Everything that has happened in the last 28 days is clear evidence of war crimes committed by Israel, amounting to crimes against humanity," he told reporters on Aug. 7 in The Hague. "There is no difficulty for us to show or build the case. Evidence is there. … Israel is in clear violation of international law."

Amnesty International has also called on the ICC to investigate the war in Gaza. The Amnesty statement said that such an investigation would help “to break the culture of impunity which perpetuates the commission of war crimes and crimes against humanity in Israel and the Occupied Palestinian Territories.”

Legal experts say there are three ways that the ICC can initiate procedures: the court’s own prosecutor can initiate warrants for questioning war criminals; the UN Security Council can demand investigations based on Chapter 7 of the UN Constitution; or the government of a member state can apply.

Palestinians have been pushing the newly recognized UN's nonmember state of Palestine to join the ICC, to initiate proceedings against Israel, even if the latter is not an ICC member.

Palestine, which became a nonmember UN observer state, can legally initiate procedures if it joins the 1998 Rome Statute. What seems to be holding back the legal ratification of this issue has been the Palestinian leadership’s desire to obtain the approval of all factions before formally joining. Abu Eita said that all Palestinian factions have been consulted, and “the majority of the factions have responded positively.” The Fatah spokesman, however, refused to disclose the position of the Islamic Hamas movement.

The Palestinian press reported that by Aug. 7, all PLO factions had signed up for joining the ICC, but that Hamas and Islamic Jihad — which are yet to join the PLO — had not answered. Veteran negotiator Saeb Erekat was quoted as saying that if Hamas and Islamic Jihad refuse to sign, then Palestinian President Mahmoud Abbas must act and order the signing of the statute.

Some Palestinian factions might find themselves accused of war crimes and thus Hamas and Islamic Jihad might be reluctant to support the move. The imprecise nature of the unsophisticated Palestinian rockets could cause the Palestinian groups to be questioned by UN officials as not doing enough to protect civilians. The extreme low number of Israeli civilians being hurt by the current cycle of violence might help Hamas avoid prosecution, but some of the earlier suicide bombings will be harder to defend.

If the events in Gaza do result in a serious investigation of Israeli war crimes, the Israelis carrying out the shelling of a UN school and the military and political officers ordering the hit could face prosecution as war criminals in The Hague.

Once all internal obstacles are resolved, it is expected that the state of Palestine will soon join the Rome Statute. Innocent Palestinian civilians, whose family members were killed and injured, will be waiting to see if international justice will indeed be carried out.