In light of the results of the Israeli elections and amid a storm of accusations between Palestine and Israel, high-level Hamas leaders see Palestinian unity as a key component for enabling a possible solution to the deep-rooted conflict. 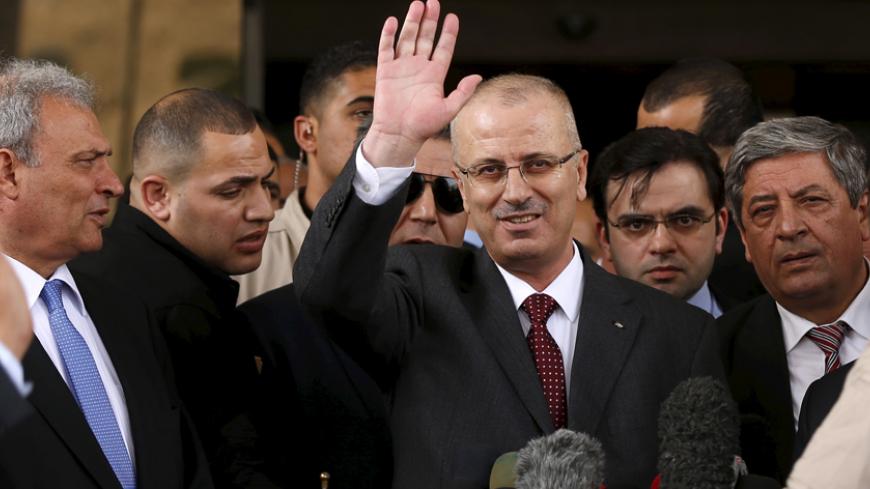 The visit to the Gaza Strip on March 25 by Palestinian Prime Minister Rami Hamdallah has provided a ray of hope to the overwhelming desire by Palestinians for an end to the split and a return to genuine reconciliation and national unity.

The last visit to Gaza on Oct. 9, 2014, by the Ramallah-based official on the eve of the Gaza reconstruction conference was not substantive and did not resolve the internal problems in Gaza despite the fact that it included a symbolic meeting of the Palestinian Cabinet. Nevertheless, the meeting in Gaza paved the way for a $5.4 billion international commitment to reconstruct Gaza. Since then, however, the reconstruction has been hampered by continued political squabbling by the two leading Palestinian factions, Hamas and Fatah.

Some of the unresolved issues include who will control the border crossings, especially the Rafah crossing to and from Egypt, and the fate of some 50,000 Gazan government employees, who were hired by the Hamas-led administration, but who have not been added to the payroll of the Ramallah-based government. Palestinians of all factions have supported the unity government led by Hamdallah, but no resolution has been found for the Hamas-hired employees.

It appears that Hamas is holding out on giving up the border crossings to the Presidential Guards until the issue of their public servants is resolved. The Ramallah government is concerned that if they pay the Hamas-hired public servants, they might be accused of funding terrorism and as a result might be sanctioned by the international community.

Furthermore, the Palestinian coffers are running on empty as a result of the Israeli government withholding the tax fees collected on behalf of the government by Israel. It is estimated that by the end of March Israel would have withheld more than $500 million in taxes earmarked for the Ramallah government. The Benjamin Netanyahu administration has withheld the funds in retaliation for the decision by the state of Palestine to join the International Criminal Court (ICC), which will take effect on April 1. Once Palestine is recognized as a full member of the ICC, it can sue Israeli officials for war crimes.

The problem of the salaries appears to be in the process of being resolved. The Swiss government has been actively involved in trying to find a legal formula that can help overcome international obstacles while also gaining the approval of all parties. A senior Hamas official in Doha told Al-Monitor that three issues hampered the Swiss plan, including who can vet the employees and the establishment of an agency that is supposed to review the practicality of the employees and whether the Palestinian government in Ramallah will be required to rehire some of the pro-Hamas public servants it is alleged to have fired.

The senior official said that the number of West Bank public servants run in the hundreds, not thousands. However, according to a report in the Middle East Monitor, the big problem seems to be the issue of vetting the employees. Those who will do the vetting will determine if a particular civil servant is considered a member of a "terrorist" organization, and thus be denied or offered the job. This is seen by Hamas as entirely inappropriate and demeaning.

The urgency of reconciliation stems from the results of the March 17 Israeli elections and the expected challenges that will face Palestinians once they pursue war crime court hearings in the Hague against Israeli officials. The Palestinian leadership is also obliged by a decision issued on March 5 by the PLO’s Central Council to suspend all security coordination with the Israelis.

The senior Hamas official who briefed Al-Monitor explained the crucial importance at the present time of accomplishing unity to address the challenges facing the Palestinian people. The official said tough times might be ahead for Palestinians, and therefore “we [Palestinians] must be a united front to bear the sacrifice that a serious national struggle will require.”

A key component in any reconciliation will be the need to rebuild the PLO on an inclusive basis and hold presidential and parliamentary elections. The senior Hamas officials said that all Palestinian parties, including Hamas and Fatah, must understand that the days in which one single party held all the powers and made all the decisions are over.

“Especially in the phase of liberation we all need to learn to share power regardless of who will win the elections,” the official said on condition of anonymity. Hamas has regularly accused Israel, the United States and Arab regimes of creating obstacles in the reconciliation effort. The Hamas official said that this anti-reconciliation pressure on President Mahmoud Abbas has increased after the fall of the Mohammed Morsi government in Egypt, the rise and overwhelming win by President Abdel Fattah al-Sisi and the anti-Muslim Brotherhood sentiment prevailing these days in key Arab countries such as Egypt, Saudi Arabia and the United Arab Emirates.

There is no doubt that the absence of Palestinian unity hampers the efforts of finding a solution to the Palestinian-Israeli conflict. Whether the process is taking the route of resistance — violent or nonviolent — or the route of negotiations and international boycotts and legal instruments, Palestinian unity is paramount to the success of the Palestinian people. Both sides have been accusing each other of being the obstacle to reconciliation and elections.

A resolution of some of the thorny issues in Gaza that Hamdallah is working on this week will certainly go a long way in setting ground for an improved atmosphere that can prepare for elections and reconstitute the PLO on an inclusive basis.