Disillusioned by Prime Minister Naftali Bennett, the leaders of the settlers are now campaigning against what they perceive as an unprecedented freeze of settlement construction in the West Bank. 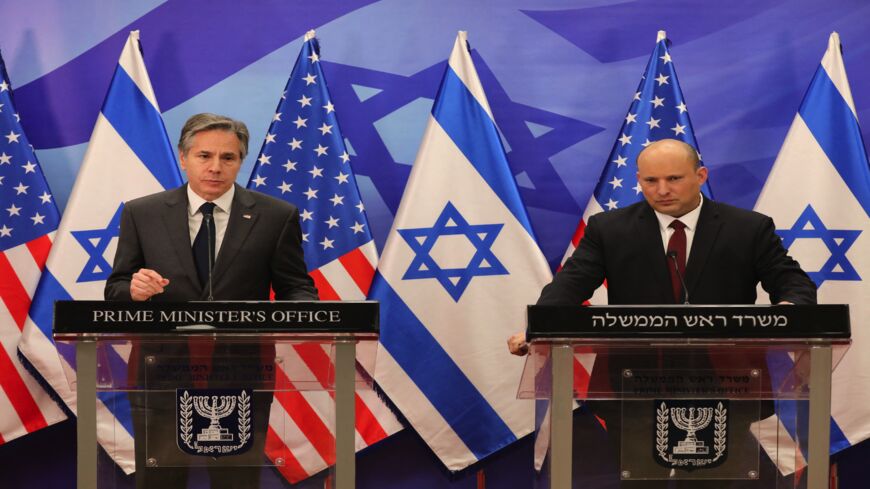 Israeli Prime Minister Naftali Bennett (R) and US Secretary of State Antony Blinken address the media after their meeting at the prime minister's office in Jerusalem, on March 27, 2022 - ABIR SULTAN/POOL/AFP via Getty Images

Yesterday was one of the stormiest days in the relationship between Prime Minister Naftali Bennett and the settlers.

On March 26, the Yesha Council (the settlers' umbrella organization) announced its decision to start a campaign to topple the government because of what they described as an unprecedented policy of freezing settlement construction in the West Bank.

Ever since the establishment of the Change government last June, the heads of the Yesha Council were divided regarding whether to support a government that contained left-wing parties and an Arab party (Ra’am) that espouses the end of the occupation.

Some of them attacked Bennett and right-wing New Hope chairman Justice Minister Gideon Saar, and blamed them for causing the overthrow of a right-wing government and the rise of the left wing due to their political war against former Prime Minister Benjamin Netanyahu. Nevertheless, some of the higher-ups in Yesha have supported the Change government and spoke in favor of Bennett and Saar, arguing that Bennett and Saar would support their right-wing interests nonetheless. This group was headed by none other than Yesha Council chairman David Elhayani, a close associate of Saar, who defended the Change government in the media.

However, in the past weeks and mainly in recent days, even those Yesha members who supported the Change government in the past have become doubtful regarding this hope. The campaign that they chose at the end of last week symbolizes a new strategy of the settlers against the government, and this does not bode well for Bennett.

It has been 15 years since the Yesha Council embarked on a campaign of this type. “The current government was established on the basis of maintaining the diplomatic status quo and continuing the construction in Judea and Samaria (West Bank) like the previous government. In recent months, the current government has frozen construction, destroyed Jewish homes and enabled illegal Arab control over Area C on the way to establishing a Palestinian state. The freeze government has no right to exist,” stated the council.

The Yesha Council argues that ever since the new government was founded, only one building project has been approved in the settlements, while homes of settlers are being demolished. Bennett himself had served as Yesha Council director-general in the past; thus, he was expected to “take care of” the interests of the settlers — now, there is great disappointment.

Yesterday, Bennett offered the settlers another reason to worry. The prime minister hosted in Jerusalem US Secretary of State Antony Blinken, who landed in Israel ahead of the Negev summit carried out by Foreign Minister Yair Lapid with the participation of the foreign ministers of Egypt, Morocco, the United Arab Emirates and Bahrain.

Addressing journalists after his meeting with Bennett, Blinken emphasized the Palestinian issue, saying, "We also discussed ways to foster a peaceful Passover, Ramadan and Easter across Israel, and Gaza and the West Bank. … And that means working to prevent actions on all sides that could raise tensions, including settlement expansion, settler violence, incitement to violence, demolitions. …" Blinken even added that “we’re also encouraged to see members of the prime minister’s Cabinet meeting with Palestinian leaders, including Defense Minister (Benny) Gantz, whom I’ll see in a short while.”

When Bennett got up to speak, he read from a declaration that said “our government is working very hard to improve the lives of the Palestinians in the West Bank and in Gaza.” He added, “Just earlier today, my Cabinet approved 20,000 workers from Gaza to be able to work in Israel. We’re going to be investing almost 40 million shekels in improving the crossings between Israel and Gaza Strip to allow smooth and a dignified movement between Gaza and Israel.”

Later on, Bennett’s bureau released a statement saying that the prime minister usually uses the Judea and Samaria moniker in Hebrew and English as well, and that this time was an exception with “no important significance.” Yet the anger directed at him did not dissipate.

Bennett was also criticized because he stood next to Blinken when the latter talked about "settler violence," making it seem that Bennett agreed with him.

According to Yigal Dilmoni, CEO of the Yesha Council, “This kind of statement testifies to additional moral deterioration of the government. This is in addition to the construction freeze and to turning your backs on the settlement enterprise. This kind of government needs to go home.”

Rogue Knesset member Amichai Chikli, from the prime minister’s Yamina party, said, “It shouldn’t surprise us that someone who founded a left-wing government with Meretz and the Islamic Movement ultimately adopts the terminology of (anti-occupation group) Peace Now.”

Knesset member Simcha Rotman of the opposition Religious Zionism party said, “The transformation has been completed. Yamina has turned into a left-wing party, including the use of terms that were engineered to fool the public."

But those surrounding Bennett refused to let this ruffle their feathers. In those same hours, ministers of foreign affairs landed in Israel one after the other for the Negev summit that started that evening. Festive pictures from the hotel in the Negev opened the newscasts, and the media coverage of the historic event showcased an active, positive government with its eyes on the future. Everyone assumed that the anger of the settlers would be swallowed up in the media coverage of the summit that had only begun and which would create headlines and pictures.

However, on that same evening, initial reports started to emerge regarding a terror attack in the heart of Hadera. People lost interest in the summit and news channels and abandoned the Negev for pictures of the victims in the very heart of the country. It became clear very quickly that the terrorists are Israeli Arabs, brothers living in Umm al-Fahm who acted on behalf of the Islamic State. The reports of the killing spree in which two Israeli Border Police officers were killed and several other people were wounded turned that day into an especially challenging one for Bennett and his Change government.

The Israeli public in general is very sensitive to security issues. And this terror attack took place less than a week after a similar attack in Beersheba, which was also carried out by Israeli Arabs supporting the Islamic State. The result? The public is now less interested in the Negev summit, and the question becomes whether a government that includes an Islamic-Arab party is capable of dealing with what seems likes a terror wave on the part of Israeli Arabs.

It is not only settlers and right-wing ideologists who are starting to doubt such a partnership. Even before these terror attacks, the prime minister failed to gain much popularity in the public. The added issue of security further destabilizes his position. Meanwhile, it was reported that Bennett is now working in his home in Raanana after it was discovered this morning that he caught COVID-19. When he finishes his days in isolation, he will face strong political and public battles.