Likud-rebel Gideon Saar is against a Palestinian state and is close to the ultra-Orthodox politicians, yet voters from the center-left camp support him in the polls. 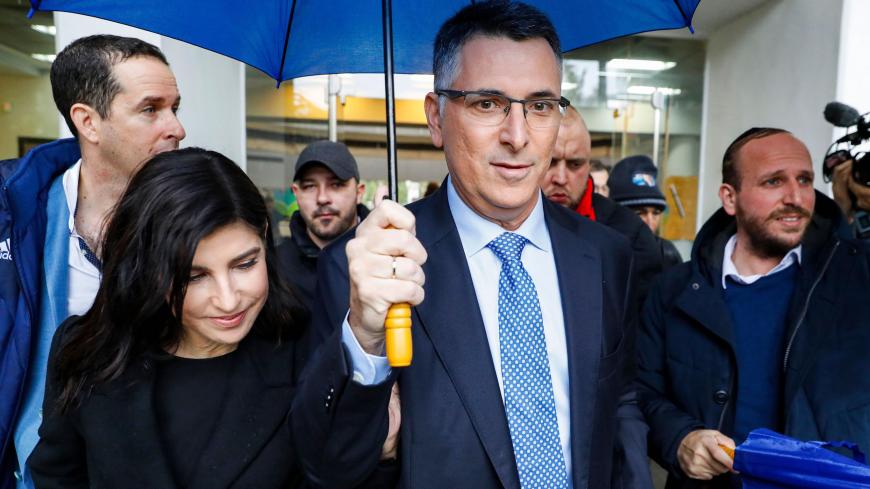 Gideon Saar (C), Israeli member of Knesset for the Likud party, accompanied by his wife Geula Even Saar (L), leave a polling station after casting his ballot during a primary election vote to elect the party chairman, in the coastal city of Tel Aviv, Israel, Dec. 26, 2019. - JACK GUEZ/AFP via Getty Images

Even Israel’s most experienced poll-takers did not predict the intensity of the “Gideon Saar Phenomenon.”

Indeed, only a day after he quit the Likud on Dec. 8, Saar announced he will compete for premiership in the next elections against Prime Minister Benjamin Netanyahu. With this goal in mind, he formed a new right-wing party that has already accumulated in the polls a high double-digit of mandates. Still, similar moves had occurred in the past, in periods when people became fed up with the country’s leadership, period. But in Saar’s case, it is more than that. It is not only a story of a meteoric political rise, but mainly the potential profile of his voters, with many of them drawn from the secular center-left depleted electoral pool.

Actually, all the polls taken since Saar declared his political independence point to the fact that he is supported also by disappointed Blue and White party voters. These are the voters who had high hopes that Defense Minister Benny Gantz could unseat Netanyahu, and when this didn’t happen, they abandoned Gantz.

All the previous political stations of Saar’s life were in distinctive right-wing parties. So how did it happen that 53-year-old Saar is garnering significant support from the secular center-left? The question becomes even sharper when looking into Saar’s first years in politics. As a young man, he had identified with the pro-settler Hatchiya party that was even more right-wing than the Likud.

The answer is rooted in the intensity of the hatred directed at Netanyahu, combined with the disappointment and despair that even Gantz — the “prince” — failed to replace Netanyahu. In effect, all three former chiefs of staff in Blue and White’s leadership were defeated.

No scriptwriter could have turned Saar into the darling of the left, but in the current crazy social-political period in Israel, even the impossible became possible. Who is Saar? For years — as government secretary under Netanyahu in 1997 and Ariel Sharon in 2001 — Saar did not move an inch from the right-wing worldview, based on a stubborn opposition to the establishment of a Palestinian state. And when Saar was elected to the Knesset under the Likud in 2003, he continued to toe the line and opposed the 2005 Disengagement Plan from the Gaza Strip, which was supported by Netanyahu who was finance minister at the time.

In fact, over the years, Saar became very close to ideological right-wing circles in the settlements. For many years, Saar was close to Netanyahu and supported him even when the chips were down: For example, when Netanyahu returned to the premiership in 2009. Saar's political views were always more ideologic right-wing than Netanyahu's; Saar was a man of principle who, despite being secular, was respected in religious circles.

But starting in 2014, somehow a black cat got between Netanyahu and Saar and the friendship turned into a world war. Last year, Saar defied his former mentor and ran against Netanyahu in the primaries for head of the Likud. Saar suffered a stunning defeat, and Netanyahu did not forget nor forgive; the latter left Saar out of the current government while handing over senior positions to relatively new Knesset members.

Ever since the coronavirus pandemic began, Saar found himself pushed to the margins. Simultaneously, Yamina head Naftali Bennett gained momentum due to his contrarian stance vis-a-vis Netanyahu. From this low point, Saar recalculated his position and understood that anti-Netanyahu sentiments could be his opportunity, too; after all, these sentiments had transformed Bennett into a leading candidate for the premiership. Saar not only left the Likud, he also decisively announced that he would not sit with Netanyahu.

Simultaneously, the deep disappointment suffered by the center-left vis-a-vis Blue and White broke records. The large protests over the last two months opposite the prime minister’s house on Jerusalem's Balfour Street was the direct result of the aggravation and emotional distress that Gantz’s electors experienced. They understood that the opportunity to replace Netanyahu had been wasted, and now there was no leader in the center-left who could do it.

Then, along came Saar and in a flash he became the new hope of the “Anyone but Netanyahu” camp, most of which is planted in the center-left. The fact that he dared to face down the prime minister has turned Saar into a popular figure, in a camp which had long viewed him as an opponent.

Anyone who has been hanging out in Tel Aviv in recent days and has been privy to random street conversations knows that secular left-wingers (including Balfour protesters) have been viewing Saar more positively. They are ready to vote for him because they believe that he will succeed in doing what other center-left leaders failed to do: To bring down Netanyahu.

This is truly amazing, since Saar’s worldview is light years away from what they believe; they believe in liberalism, in fighting ultra-Orthodox coercion and in the establishment of a Palestinian state including the partitioning of Jerusalem. Some of Saar’s past actions, on the other hand, were in the  opposite direction: As education minister in 2011, Saar initiated trips of pupils to right-wing Jewish sites in the West Bank, such as the Hebron Cave of the Patriarchs. This aroused tremendous criticism from the left that he was subjecting the educational system to indoctrination. Pupils and teachers associated with the peace camp demonstrated against these trips by submitting a petition.

Within the Likud, Saar’s actions gained him much credit and strengthened his status as an ideologist. This was important to the settlers who supported him over the years in the primaries for party’s list in the Knesset.

Meanwhile, another facet of Saar’s lifestyle has emerged: He has come closer to the ultra-Orthodox camp and has even taken on elements of a religious lifestyle, such as Sabbath observance. As part of his new "branding," Saar has distanced himself from the Tel Aviv swinger image of the past (when he served as a trendy Tel Aviv DJ, even on the Sabbath). Now Saar prefers to appear in the media as having a close dialogue with the rabbinical establishment.

When Saar had been minister of the interior in 2014, he took advantage of his powers and vetoed a municipal aid law of the Tel Aviv municipality that allowed convenience stores to open on Saturday. Saar argued at the time that this law affronts the national-social sense of the Sabbath, which is a component of the Israeli public space.

This caused a ruckus to break out in Tel Aviv, and Saar was branded as an offender of liberal and secular values. But this does not seem to bother him. His grand plan was to run for head of the Likud and then win the ultra-Orthodox vote, so he was not worried about “offending liberal and secular values.” Thus in Tel Aviv, the bastion of left-wing secularist values, Saar became a red flag in those years.

But this winter in Tel Aviv, desperation over Netanyahu’s extended rulership, hatred of him and disappointment over the left-wing representatives is so deep that they are willing to close their eyes to the extreme opposition of their worldviews. Tel Aviv is only an example: Saar is receiving support from all center-left strongholds in the big cities. The result? The final shattering of what remained of the once-upon-a-time magnificent and proud left-wing camp.