The American pressure on Israel to make goodwill gestures to the Palestinians before President Joe Biden arrived empowered Prime Minister Yair Lapid to advance steps that would otherwise have been difficult for him to take. 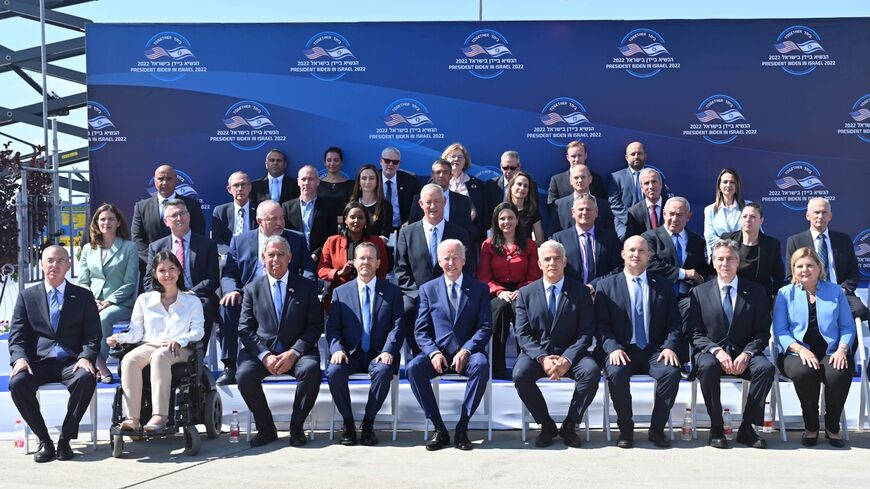 US President Joe Biden's arrival to Jerusalem today, two weeks after Prime Minister Yair Lapid took office and less than four months before the Nov. 1 elections, offers Lapid an opportunity to position himself as a world leader. Biden's words reinforcing the US commitment to Israel’s security also benefit Lapid politically, as Israeli voters are traditionally very attentive to security issues.

From Israel, Biden will fly to Saudi Arabia, where he might announce an agreement between Jerusalem and Riyadh on control over two islands in the Straits of Tiran. If such an agreement is not concluded in time for the visit, other Saudi steps signaling rapprochement with Israel could be publicized. From Lapid’s point of view, any steps in the direction of normalization with Saudi Arabia would further reinforce his status as head of Israel's center camp and assist his government capitalize on the Abraham Accords.

Opposition leader Benjamin Netanyahu, who had signed the Abraham Accords in 2020, must be concerned that Lapid will become the new champion of Israel’s relations with Gulf countries. The current government's numerous moves in that direction, including security cooperation agreements with Morocco and with Bahrain as well as a host of commercial and economic agreements with the Emirates, Bahrain and Morocco could cost Netanyahu his claim to fame and his diplomatic legacy.

In a July 11 statement, only two days before Biden’s arrival, Netanyahu pledged that should he be elected prime minister, he would establish “full peace agreements” with Saudi Arabia and sign “additional deals that will bring us closer to the end of the Arab-Israeli conflict.”

The Palestinian arena is more complicated. As foreign minister, Lapid did not meet with Palestinian President Mahmoud Abbas, leaving most contacts with the Palestinian leadership to Defense Minister Benny Gantz and to left-leaning Meretz ministers. The coalition agreement was clear that no peace talks with the Palestinians were to take place, though previous Prime Minister Naftali Bennett did encourage economic moves to improve the lives of Palestinians in the West Bank and Gaza. However, ahead of Biden’s visit, Lapid called Abbas to discuss security measures and ensure sure the visit would happen peacefully.

During Biden’s last visit to Israel a decade ago as vice president, Israel announced the advancement of settler housing units in east Jerusalem, causing a diplomatic crisis between Jerusalem and Washington. This new visit has forced Lapid and his government to halt moves that could have been perceived by the Americans and the Palestinians as provocative.

The Jerusalem District Planning and Construction Committee was supposed to convene next week, just after Biden’s visit to Israel, to advance housing projects for both Jewish and Arab neighborhoods in east Jerusalem. The plans concern some 2,000 housing units in a new neighborhood built in Givat Shaked and in another neighborhood between Har Homa and Givat Hamatos. Israeli officials said yesterday that the meeting would be delayed.

Interior Minister Ayelet Shaked clarified that discussion on the plans was simply being delayed by a week, not canceled. “I will not allow on my watch only construction plans for Jews to be affected,” she said.

But Lapid’s government did more than delay that discussion. Yesterday, the Defense Ministry announced a series of steps to better the lives of Palestinians in the West Bank and in Gaza. According to the military’s liaison to the Palestinians, Israel will legalize the status of 5,500 undocumented Palestinians and foreigners living in the West Bank and Gaza (in addition to 12,000 others a few weeks ago). Other measures include an additional 1,500 work permits for workers from Gaza (on top of an existing 14,000) and the opening of a new crossing point in the northern West Bank to allow Arab-Israelis  to enter the Palestinian town of Jenin.

Biden's presence can be seen as a chance for Lapid to justify measures concerning the Palestinians that would have been more difficult for him to announce during his campaign. And while the move did draw criticism by settler leaders, the media’s attention was elsewhere, focused solely on the visit.

The Biden administration was reported to have pressured Jerusalem before the trip to make gestures toward the Palestinians. In his brief speech on the Ben Gurion tarmac, after many warm words about his commitment to Israel’s security, Biden stated clearly that he considers the two-state solution the best one for the Palestinian conflict. While neither Lapid nor President Isaac Herzog mentioned them in their welcome speeches, it will be impossible for Lapid to avoid the issue at his joint press conference with Biden scheduled for tomorrow, when the two are expected to sign the Jerusalem Declaration.