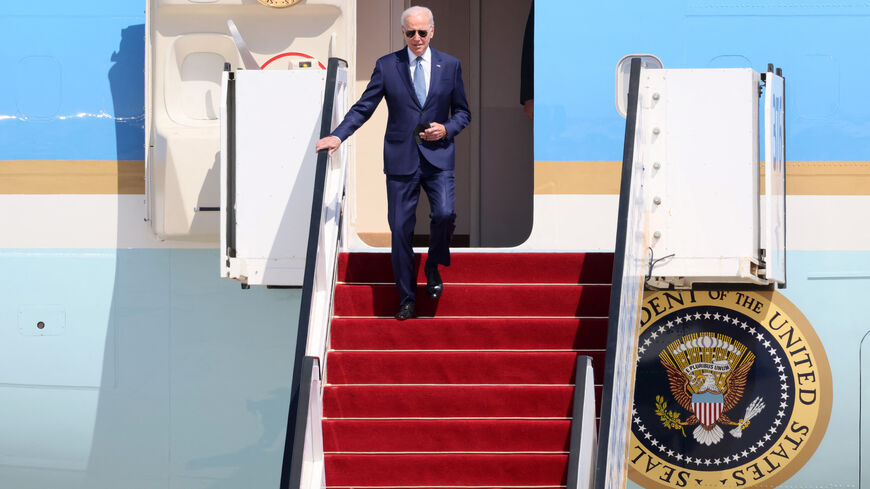 US President Joe Biden disembarks from his plane upon landing at Ben Gurion Airport in Lod near Tel Aviv, on July 13, 2022, as he starts his first tour of the Middle East since entering the White House last year. - JACK GUEZ/AFP via Getty Images

What to watch in Biden’s Middle East trip

“A new and promising chapter.” The president who sought to pivot away from the Middle East arrived in Israel today for the first leg of a regional visit that also includes stops in the occupied West Bank and Saudi Arabia.

President Joe Biden’s planned visit to Saudi Arabia, where he will attend a summit of the Gulf Cooperation Council (GCC) +3 — the three being Egypt, Jordan and Iraq — has generated controversy over whether the benefits of reconciling with Saudi Crown Prince Mohammed bin Salman, whose country Biden referred to as a “global pariah” while running for president, outweigh the costs, especially if Saudi Arabia offers little in terms of energy production.

Biden attempted to quiet the critics in a Washington Post op-ed this past weekend, describing the goal of his Middle East trip as starting “a new and more promising chapter of America’s engagement” in a part of the world that is “essential to global trade and the supply chains we rely on.”

Here’s a look at his jam-packed schedule over the next few days and what we’ll be watching:

In Israel, it’s all about Iran. When Biden stepped off Air Force One, he was greeted by Israel's newly minted interim Prime Minister Yair Lapid, who is steering the caretaker government prior to yet another round of elections in November.

In the West Bank, low expectations. As Rasha Abou Jalal reports, the Palestinians aren’t holding their breath that Biden’s visit will deliver a breakthrough in their pursuit of statehood. Biden reiterated US support for a two-state solution in his first interview in Israel. Over in Gaza, Hamas leader Yahya Moussa told Al-Monitor that Biden "will not offer anything to the Palestinian cause.”

In Saudi Arabia, it’s about oil and MBS. Biden’s participation in an extraordinary meeting of the GCC+3 on July 16 should be a significant step for regional diplomacy, integration and security coordination. But in the United States, all eyes will be on Biden’s meeting with MBS and whether Biden will walk away with an oil concession from the kingdom to alleviate high energy prices in the United States.

Absent a Saudi concession on oil production, the focus will be on the choreography of Biden’s interactions with MBS. Shortly after taking office, the Biden administration released a US intelligence community assessment that deemed MBS was responsible for the murder of Saudi columnist Jamal Khashoggi in 2017. Human rights groups also want Biden to use his Saudi meetings to secure the release of several US citizens and residents held under punishing travel bans in the kingdom.

For a more in-depth discussion of Biden's visit to the region, don't miss our webinar this Friday at 11:00 am ET featuring our reporters in Washington, Israel and Palestine, who will be answering your questions live. Register now here.

A London-based oil company that operated in pre-civil war Syria is lobbying US and UK officials on an initiative that would see the proceeds of Syrian oil being used for aid, rather than lining the regime’s pockets. The idea, according to Gulfsands Petroleum managing director John Bell, is for international oil companies to return to operations in northeast Syria and for a portion of their proceeds to be used to help finance humanitarian, economic and security projects across the country. Diplomatic sources have mostly dismissed Gulfsands’ proposal as unrealistic. Bell told Amberin Zaman and Dan Wilkofsky that he estimates Syria’s oil and gas industry, if rebuilt, could rake in more than $20 billion annually.

Turkey’s ties with Ukraine are under increasing strain over allegations that Russia is stealing Ukrainian grain and shipping it to Turkish ports. Ankara has been slow to crack down on the illegal trade, which as Amberin Zaman writes, is “a symptom of the deeper malaise besetting the two countries as Ankara seeks to keep ties with the Kremlin steady.” Zaman discussed the grain theft in her exclusive interview with Ukraine’s ambassador to Turkey, Vasyl Bodnar, who said Kyiv had “bombarded” Ankara with “notes and information” supporting its claims.

Iran is experiencing record high inflation, reports Ali Dadpay. As the monthly inflation rate reached 12.2% in June, the average Iranian family lost 10% of its purchasing power, according to the Statistical Center of Iran. Compared to spring 2021, Iranian consumers are paying 50% more for the same products. The rising inflation shows no signs of slowing down, and social networks are filled with updates on the prices of rice, dairy, bread and other essential items.

Sudan’s Gen. Abdel Fattah al-Burhan has proposed a change in the structures created after last October’s coup, but his plans have been widely rejected for retaining the army’s power. In a televised speech on July 4, the military general announced that his forces would withdraw from political negotiations aimed at forming a new government. But the Sudanese opposition is skeptical of his motivations. As Marc Espanol points out, Burhan is essentially proposing “a vague military council with no civilian oversight and with wide-ranging powers yet to be defined.”

Wood stoves are making a comeback across Lebanon, as a growing number of people in the impoverished country are ditching expensive cooking gas in favor of outdoor wood-burning stoves. The price of one gas cylinder has reached 400,000 Lebanese pounds — more than half of the minimum monthly wage. Since the cost of commercial wood has also risen, many are supplying their stoves with wood cut from trees near their homes. Rodayna Raydan speaks with cash-strapped Lebanese who are making the switch to wood-burning stoves as a way to cut costs.

Ben Caspit speaks this week with Ambassador Mark Regev, a veteran Israeli diplomat, about Biden’s trip to Israel as vice president in 2010 and why he expects this visit to go more smoothly.

For “On The Middle East,” Andrew Parasiliti interviews Martin Indyk, a distinguished fellow at the Council on Foreign Relations, who says Biden can be counted on to reiterate his support for the two-state solution but that those words won’t mean much in terms of US policy.